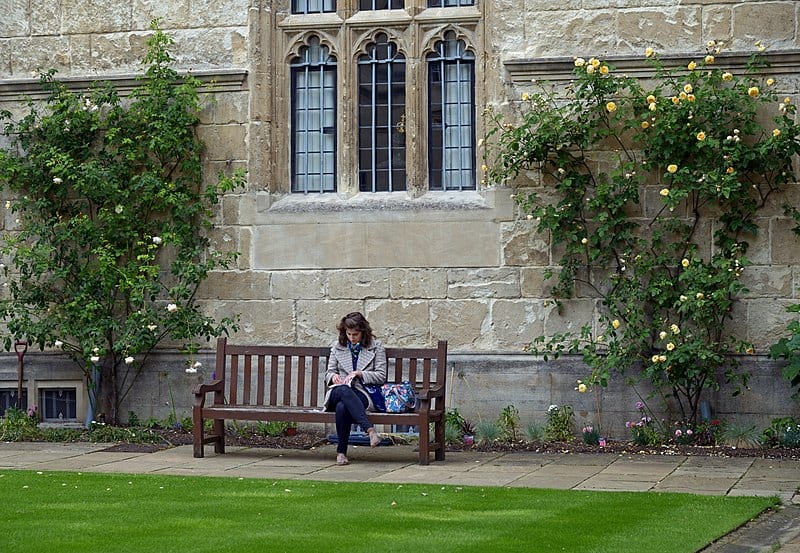 Most politically savvy people will have heard of the parable of the liberal honors student whose conservative professor offers to “redistribute” her straight-A grades to her disadvantaged classmates as a way of teaching her about fairness. The analogy is potent because any serious person agrees that grades are earned and should not be bestowed on the basis of immutable characteristics — or so one might think.

Oxford University took an important step today toward erasing the line between reality and satire by announcing that it would effectively hand out free grades on the basis of skin color. The news was given to students in the form of an open letter signed by Oxford Vice-Chancellor Louise Richardson and the heads of house of Oxford’s constituent colleges.

In the letter, Richardson announces that the university is “determined to support our Black students in every way we can” in light of the “traumatic effect of the brutality which killed George Floyd and which is a manifestation of institutionalised racism.” The vice-chancellor promises more black counselors for the emotionally wounded, which is relatively tame as far as racial justice proposals go. But she then offers two troubling concessions: a “reduction of workload” for “any Black students who may be experiencing difficulty at this time,” and the option of “mitigating circumstances” appeal (administrator jargon for free grade boosts) to traumatized students.

Apparently going for a social justice bingo, Richardson penned a separate letter in which she announced Oxford’s intention to “decolonize” its math and science degrees, noting proudly that the social sciences had already succeeded in “integrating race and gender questions into topics” and “embedding teaching on colonialism and empire into courses.” One wonders what imaginative methods Oxford’s diversity bureaucracy will find to insert anti-racism into a math degree. It is probably worth noting here that Ms. Richardson’s only academic qualifications are in history and government.

Professor Gordon Klein of UCLA, whose recent plight was related by Dov Fischer for the American Spectator, offers a useful way of thinking about the absurdity of Richardson’s concessions. In response to some of his business students asking for similar accommodations for black students, he responded,

Thanks for your suggestion in your email below that I give black students special treatment, given the tragedy in Minnesota. Do you know the names of the classmates that are black? How can I identify them, since we’ve been having online classes only? Are there any students that may be of mixed parentage, such as half black-half Asian? What do you suggest I do with respect to them? A full concession or just half? Also do you have any idea if any students are from Minneapolis? I assume that they probably are especially devastated as well. I am thinking that a white student from there might possibly be even more devastated by this, especially because some might think they’re racist even if they are not. My TA [Teacher’s Aide] is from Minneapolis, so if you don’t know, I can probably ask her. Can you guide me on how you think I should achieve a “no-harm” outcome since our sole course grade is from a final exam only? One last thing strikes me: Remember that MLK famously said that people should not be evaluated based on the “color of their skin.” Do you think that your request would run afoul of MLK’s admonition?

Not a response befitting of a professor, perhaps, but Mr. Klein provides some food for thought for the rest of us. Underlying the requests made by students at Oxford and UCLA is the premise that George Floyd’s death is particularly traumatizing for black students by virtue of shared skin color. How this works is not to be questioned, and any contradictions and awkward positions at the logical conclusion of this kind of thinking are to be quietly ignored. The professor, for his part, received a three-month suspension from UCLA and may lose his job altogether.

We are also expected to believe that trauma (in this case “trauma” by the voodoo magic of intersectionality) entitles individuals to skirt responsibilities expected of their peers. The fact remains that grades should, at least in theory, reflect only the academic competence of students. It is plausible that emotional distress might have an effect on performance, and accommodations can be made within reason. But the university administration’s attempt to enforce equality of outcome in the form of group-specific grade inflation, with no scientific or statistical reasoning, can only hurt those they mean to help. A student does not become competent by the decree of a diversity officer.

Perhaps the most absurd part of this situation is that killings by police are virtually a non-issue in the United Kingdom. In America, police kill about a thousand people per year, the vast majority armed. In Britain, such killings happen so infrequently, armed or unarmed, black or white or Asian, that a list of most occurrences going back hundreds of years can fit on a Wikipedia page of modest length. If one looks exclusively at cases like George Floyd, in which an unarmed black man dies in the hands of police, the rate in America drops to about a dozen per year. In Britain that number rounds to zero.

We are told that systemic police violence must be traumatizing to the point of partial mental incapacitation to privileged students who live in a country with virtually non-existent police violence and who have almost certainly never experienced such violence themselves. This trauma must then be presumed to bestow undemonstrated competence in academic coursework. This all could make for a new parable in 30 years’ time — a moral lesson on hysterical wokeness, perhaps.