The End is Nigh,Top Story birthrate,China,Climate Change,Follow the Science,Overpopulation The Population Bomb Doomsday Scam | The American Spectator | USA News and Politics
Menu
The End is Nigh
The Population Bomb Doomsday Scam
The narrative we’ve been force-fed for decades is being abandoned by its strictest adherents.
by Stephen Moore and David M. Simon
d13/Shutterstock.com

More Politics
Sign Up to receive Our Latest Updates!
Register
Hot Off
The Press
The Nation’s Pulse
Abiding in a Continuous Present
by Shmuel Klatzkin
Constitutional Opinions
The Supreme Court Passes on Religious Liberty Cases
by Tom Raabe
A Further Perspective
Bishop Burbidge Is Right About Gender Ideology
by Irene Pruitt
Hither and Yon
Biden’s Desperate Race to the Lying Bottom
by Scott McKay
The Talkies
Wokefinger: Sean Connery’s James Bond a Rapist?!
by Lou Aguilar

It may be the most astonishing story of the year that no one is paying much attention to. As the Wall Street Journal recently reported on their front page, “Chinese officials are drawing up plans to further loosen birth restrictions and transition toward policies that explicitly encourage childbirth,” (emphasis added). According to Chinese insiders, China, the most populous nation on the planet, is replacing its brutish childbirth restrictions with a program allowing, and even rewarding, couples for having kids. Beijing has announced that its demographic problem today is too few young people, not too many.

The New York Times put the point even more emphatically in its coverage of this amazing twist of fate, by acknowledging in a headline that the dreaded “population bomb” of the 1960s and ’70s has turned into a global “population bust.”

Beijing has announced that its demographic problem today is too few young people, not too many.

Let us put it even more concisely: the greatest environmental/demographic scare of the second half of the 20th century — overpopulation — is now officially conceded to have been a monumental fraud.

To appreciate what an embarrassing reversal this is for the green movement, consider that 40 to 50 years ago nearly all the scientists, policymakers, U.S. government agencies, and experts at the United Nations told us that rampaging population growth would lead to a Malthusian doomsday with the world in our lifetimes running out of food, energy, and nearly everything else. If ever there were an ironclad “scientific consensus,” this was it.

In their 1967 book Famine 1975!, U.S. government agronomist William Paddock and Foreign Service officer Paul Paddock predicted that population growth would soon lead to such mass starvation in so many nations that triage would be required and that nations like India and Egypt should be written off as “can’t-be-saved.”

Stanford scientist Paul Ehrlich became the most famous academic in the world with his mega-bestseller The Population Bomb and its widely quoted opening sentence: “The battle to feed all of humanity is over. In the 1970s and 1980s hundreds of millions of people will starve to death in spite of any crash programs embarked upon now.” Ehrlich was Al Gore before there was Al Gore.

It wasn’t just some academic kooks who were peddling these apocalyptic predictions. In 1975, a statement signed by such luminaries as soon-to-be National Security Adviser Zbigniew Brzezinski, Nobel Prize-winning scientist Albert Szent-Gyorgyi, business titans J. Paul Getty and Henry Luce III, United Auto Workers President Leonard Woodcock, and others appeared on a full page of the Wall Street Journal with a similar forecast: “The world as we know it will likely be ruined before the year 2000,” because “food production cannot keep pace with the galloping growth of population.”

The UN Economic and Social Commission for Asia and the Pacific predicted “500 million starvation deaths in Asia between 1980 and 2025.”

The experts were only off by about 90 percent. In reality, there has been no mass starvation other than in draconian socialist economies like North Korea and mid-1980s Ethiopia. The University of Oxford’s Our World in Data reports that worldwide famine deaths have sharply decreased from an annual average of over 16.6 million in the 1960s to 255,000 since 2010 — and that total famine deaths worldwide (not just in Asia) were less than 60 million from 1980 through 2016.

Instead, even as the world’s population doubled from 3.7 billion in 1970 to 7.4 billion in 2015, food production rose even faster. India with 1.39 billion people has become a major agricultural exporter. Death rates nearly everywhere have plummeted. In the United States farm productivity rose so rapidly — with an almost tripling in yields — that the government has had to pay farmers not to grow so much food.

The world’s population is larger, but humans today live longer and are healthier, vastly more prosperous, and better fed. Our World in Data reports that from 1970 through 2015, world extreme poverty fell from almost 48 percent to less than 10 percent. 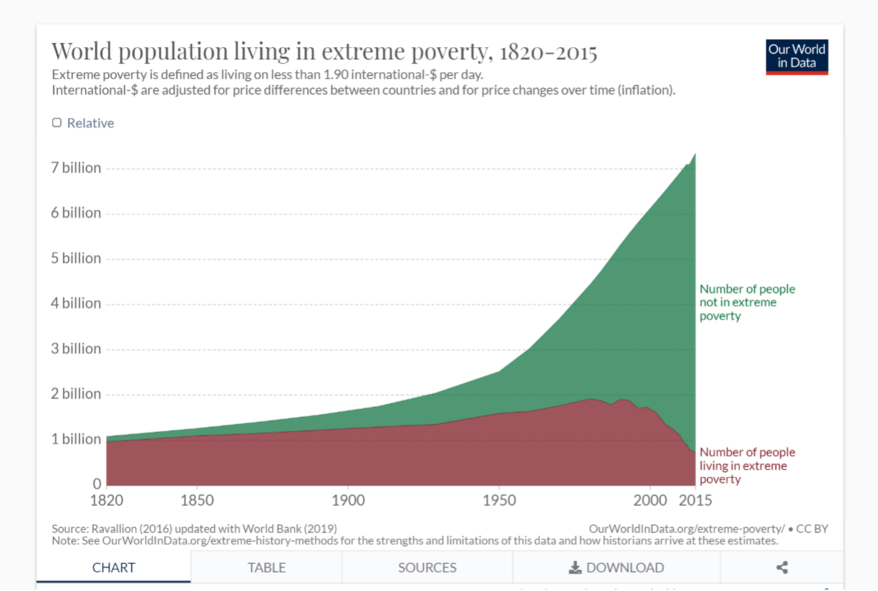 How could the “scientific consensus” have been so wrong? A simple answer is the doomsayers erroneously extrapolated short-term trends in fertility far into the future without understanding that human beings are not like Norwegian field mice (which some Malthusians compared us to). We adapt our behavior and we devise solutions, such as the “green revolution” in agriculture and the shale oil and gas revolution that overnight ended the preposterous fears of ever running out of food or energy.

The doomsayers also ignored decades of data showing population growth can be beneficial rather than harmful to humanity. Instead of impoverishing people and depleting resources, additional people on the planet, when paired with freedom and free markets, drives economic growth, productivity, and a cleaner, safer environment.

The green movement that propagated this scientific fraud would like to sweep the whole episode under the rug — and keep the focus on their latest end-of-the-world scenario. When confronted with the new facts, instead of conceding that their dire predictions were dead wrong, they self-servingly congratulate themselves for saving us from a demographic nightmare.

In reality, the lesson of the population bomb lie is that false doomsday alarms come at a high cost, and in this case unleashed horrific outcomes. How many millions of women and couples in the U.S. and worldwide tragically followed the advice of the Malthusians that they had an ethical or moral obligation to have fewer children or even to go childless?

Much worse were the activities of repressive foreign governments in Africa, China, Egypt, India, and Central America, which bought into the primal screams of Western academics and imposed gruesome population control programs — including strapping women to metal tables and performing forced abortions and sterilizations to reduce births. China’s ghastly one-child policy led to millions of sex selection abortions and infanticides. Tens of millions of girls in China went missing.

Yet, in the name of “saving the planet,” the U.S. government and the UN applauded these inhumane tactics — and even helped finance them. So much for women having control of their own bodies.

A second lesson here is the dangers of shutting off open and fact-based debate on environmental issues. The hero in exposing the Malthusian hoax was the late doomslayer economist Julian Simon — the father of one of your authors and the mentor of the other. When Simon and others challenged the myth of an overpopulated planet, they were berated in the media, the halls of Congress, and the university faculty lounges as “crazy” and “dangerous” for daring to challenge the “settled science” of overpopulation.

Shouldn’t this give us all pause when we hear this generation’s sages at the UN and the U.S. State Department (and now even the Biden Treasury Department) tell us that climate change is an “existential threat”? Shouldn’t this generation’s Julian Simons who dare question the oracles predicting catastrophic warming of the planet 50 and 100 years from now be heard from rather than being denounced as “science deniers” and erased from Twitter and Facebook?

Suppose, for example, the planet warms as the models predict. Do we really know for certain that this will result in catastrophe? Just as we now understand that nations with expanding populations often do better economically, it is also quite possible that further warming of the planet will have positive benefits as well — certainly in dramatically increasing agricultural output.

For example, a study published in 2015 by the British medical journal the Lancet found that cold kills over 17 times more people than heat. This study, “the largest dataset ever collected to assess temperature-health associations,” examined more than 74 million deaths in Australia, Brazil, Canada, China, Italy, Japan, South Korea, Spain, Sweden, Taiwan, Thailand, the United Kingdom, and the United States from 1985 to 2012.

The study reported that cold temperatures were associated with 7 percent of these deaths, while heat caused only about 0.4 percent.

Before we adopt a strategy of diverting trillions of dollars toward wind and solar power and electric vehicles while dangerously shutting off our traditional sources of abundant, cheap, and highly reliable forms of energy, perhaps we can search for much less costly technological improvements to combat any dangers that may arise as a result of the planet’s warming.

In sum, the lesson of the population bomb that fizzled is that we need far more humility and open debate about predictions of the planet’s future. To paraphrase Yogi Berra, predictions are difficult, especially when they are about the future.

But we do know with certainty about the past. The doomsayers of the 1960s and 1970s were anything but saviors. They were just dead wrong. Worse, they did great damage to human freedom — especially in the poorest countries — and their faulty science was used as an excuse for imposing barbaric government controls on tens of millions of people around the globe. There should be a scientific consensus that that is not an episode we ever want to repeat.

Stephen Moore is an economist at Freedom Works and one of the founders of the Committee to Unleash Prosperity. He is the co-author with Julian Simon of It’s Getting Better All the Time: The 100 Greatest Trends of the 20th Century.

David Simon is a senior fellow for the Committee to Unleash Prosperity and a lawyer based in Chicago. For more, please see www.dmswritings.com.