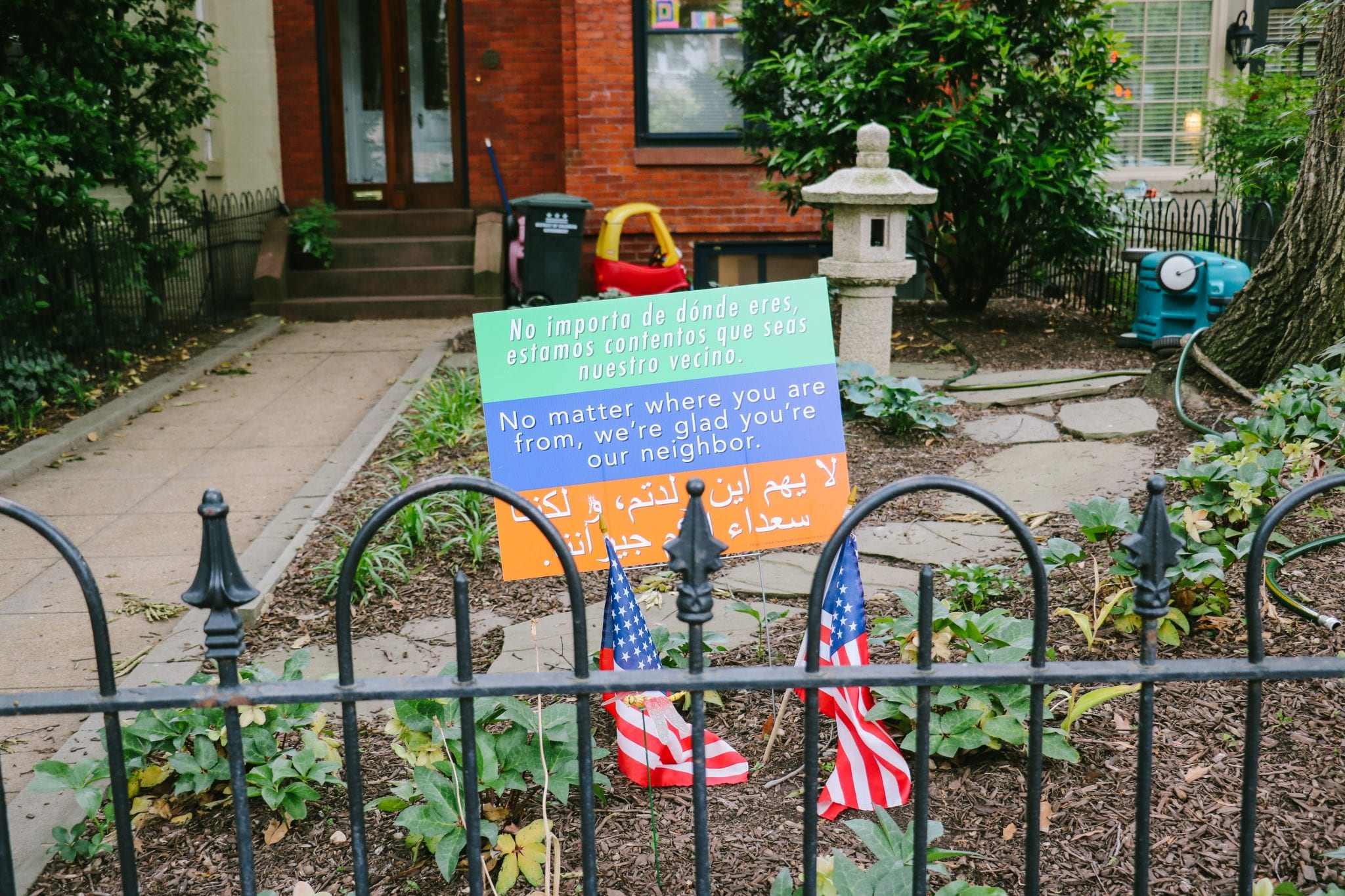 Go to the right Washington, D.C., neighborhood and a front yard is not just a front yard. It’s an opportunity to display your moral superiority and allegiance to social justice.

“We Believe No Human is Illegal.” “Black Lives Matter.” “No matter where you are from, we’re glad you’re our neighbor.” One in my ultra-liberal neighborhood speaks to me more than the others, however, as it tends to provoke a personal identity crisis. “Everyone is Welcome Here,” it reads. On its surface, this should apply to me; I am an immigrant. (Hooray!) Yet I wonder whether this sentiment would survive knowing I moved to America to work in a conservative think tank. (Boo!)

This particular slogan also invites questioning as to where the other limits of this sentiment are drawn. Because surely not everyone should be welcome. To say that everyone — no matter their character or intentions — is welcome into a country does not just contradict logic and infantilize ethics, politics, and civil society. It also means that you simply do not have a country anymore.

Yet it seems like that is the direction today’s progressives want to take us. Certainly, the concept of open borders is increasingly mainstream. So, too, is mass amnesty. This trend is especially mind-boggling to those who remember the UK election of 2010, when the Liberal Democrats floated the idea of mass amnesty and eventually abandoned it because of how loopy it was regarded domestically.

A policy too ridiculous for even Nick Clegg to sustain is not one that American presidential candidates should take seriously. That is the hand that has been dealt, however, so it is worth a reminder of what its consequences may look like.

The European Union, where frictionless travel exists between dozens of countries, provides some insight. At first glance, it is wonderful. You can be born in one country, but have the right to live and work in over 20 others. Labor’s cheaper: no more paying top dollar for your builder, cleaner, or babysitter when you can get a new arrival from Eastern Europe to do it for a quarter of the price. And the middle class get to nip back and forth between Brussels to Paris on a fun evening out.

As the pile of bodies on November 13, 2015, proved, however, once ISIS decided to make the journey for precisely the same reasons, open borders also have downsides. All that cheap foreign labor means that locals are often undercut and cannot compete. All those new people need somewhere affordable to live — and in cities like London, good luck finding it. Eastern European countries are now struggling to find doctors and nurses because health-care professionals are making the move westward for economic purposes. The demographics and even appearance of towns and cities have changed rapidly, generating local resentment and acting as an impediment to integration.

And then there is the question of refugees. German Chancellor Angela Merkel’s decision to open up Europe’s borders to all and sundry in 2015 was what happens when front-yard slogans like those in D.C. are translated into government policy. Over a million asylum seekers came to Germany that year alone. In Sweden, the 163,000 who arrived were the equivalent of the U.S. accepting 5.2 million asylum seekers in a single year. This was the open-borders dream coming to fruition: such were the numbers, and so unprepared were European border agencies, that most were just waved through with cursory or non-existent background checks.

Many made the journey for benign and understandable purposes. Yet as the author Douglas Murray argued at book-length, if you invite in the world, you invite in the world’s problems. The terrorism threat surged, with newly arrived asylum seekers particularly culpable for an increased security risk in Germany. The same country has also seen a series of high-profile sexual assaults and murders carried out by refugees. In Sweden, there has been a spike in explosions, especially from grenades, as primarily immigrant gangs fight over turf. In hitherto sleepy Finland, Iraqi torture victims are forced to live side-by-side in refugee centers with their former torturers.

While taking a far more guarded approach to this issue than Chancellor Merkel, the U.S. is hardly immune to such problems. Last month, the FBI thwarted a plot by a Syrian refugee to bomb a Pittsburgh church in the name of ISIS. This individual moved to the U.S. in 2016 and had previously posted online about being raised in Jordan “on loving the Jihad.”

That case suggests that the U.S. vetting process is hardly infallible. Sign up for an open borders policy, however, and vetting becomes nonexistent. Ditto for the ability to control who does and does not live in your country. Soon enough, nationality becomes an irrelevance.

How much the millennial, modern American Left has thought through these issues is unclear. They should, because they are not just waging a war against today’s conservatives. They are waging a war on America’s past and its future, gambling that democracy can survive even without any sense of national loyalty.

History is not on their side. As the English philosopher Roger Scruton has written, the nation state may not be the only answer to the problems of modern government. It is, however, “the only answer that has proved itself. We may feel tempted to experiment with other forms of political order. But experiments on this scale are dangerous, since nobody knows how to predict or to reverse the results of them.”

So the open borders enthusiasts need a rethink. America is not a perfect nation, but it has done pretty well by its immigrants over the past couple of hundred years. “Everyone is Welcome Provided You Come Here Legally, Work Hard, and Stick to the Rules” is not the pithiest yard sign. It is, however, still a more sustainable ethos for a nation.

A British expatriate, Robin Simcox is The Heritage Foundation’s Margaret Thatcher Fellow. He specializes in counter-terrorism and national security policy.