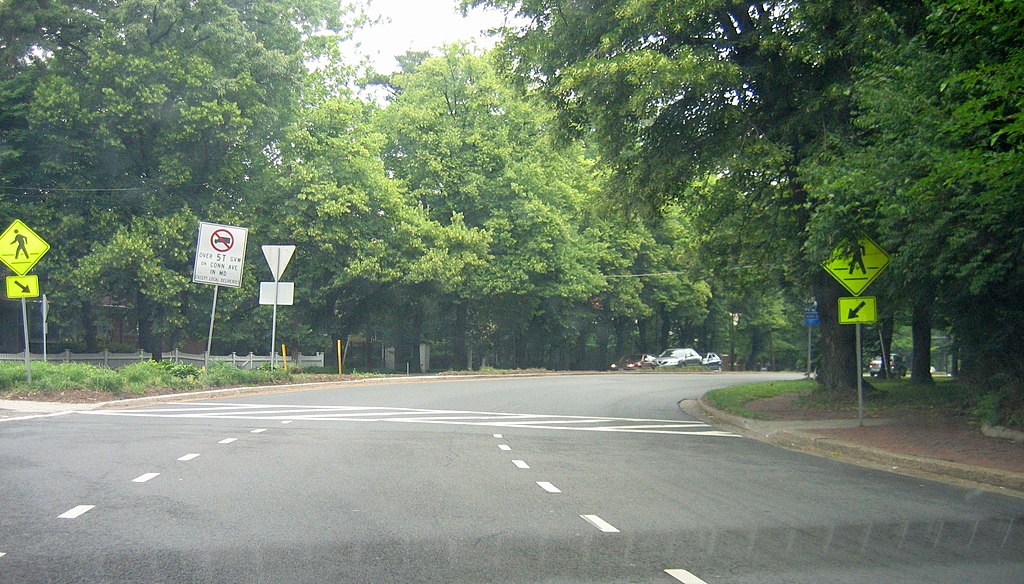 It was the best of times in Washington, D.C. Two news incidents last week brought back the memory of their twin settings, both special in my life, against the progressive rot that now corrupts them, the city, and the whole country. One was the petty squabble at the Washington Post that resulted in the termination of troublemaking nag reporter Felicia Sonmez, after she blasted a colleague over a harmless joke. The other was the attempted murder of Supreme Court Justice Brett Kavanaugh in my old neighborhood, Chevy Chase.

We were just kids right out of college, all but me committed liberals, and it would never have occurred to us to blast each other in public.

Chevy Chase Circle is a lovely fountained landmark almost 12,000 feet round, demarking the D.C.–Maryland border on Connecticut Avenue. Everything north of its nucleus is the state of Maryland, characterized by fine venerable houses — among them Justice Kavanaugh’s home. I used to jog past that house three times a week. All to the south is Washington, including my old apartment building one block down from the circle. From there every morning I would ride my bike down Connecticut Avenue, through scenic Rock Creek Park, to the iconic Washington Post Building on 15th and L Street.

I began my journalism career as a copyboy at the Post. Legends ran the newspaper back then: Executive Editor Ben Bradlee, Managing Editor Howard Simons, Head of Investigative Reporting Bob Woodward, president and publisher Katharine Graham. Every wannabe reporter my age knew of their roles in the greatest newspaper story of all time, and had seen the classic film about Watergate, All the President’s Men (1976), countless times. Like the other copy-aides (the politically corrected term for us boy and girl gophers), I marveled at the near-perfect casting of that movie. The great Martin Balsam practically channeled wise old Simons, who took a kind interest in a naïve kid like me. So did Woodward, not exactly Robert Redford, but to us punks just as golden.

Bradlee was every bit as physically and charismatically commanding as Jason Robards. I once watched him come into an elevator with two powerful reporters and an editor, make a small unserious crack about the poor lighting, and the others guffawed as if at a Johnny Carson joke. Bradlee fired longtime Washington Post film critic Gary Arnold after he panned a movie, Tender Mercies, which Bradlee enjoyed. This was power I had never before witnessed.

We copy-aides wanted to be in on it, make a name for ourselves, and inspire All the President’s Men 2. We were all smart and competitive, but in those days, the Post was Camelot, and we had no seat at the Round Table. On our very first day, Simon told us they no longer made copy-aides into reporters, a traditional route, because they could import all the Pulitzer Prize winners they needed. What they could do for us was let us write unessential local stories then, with enough bylines in the Post, a lowlier newspaper somewhere in the hinterland would hire us. The legacy of Watergate still powered the place. Plus, in the pre-internet era, the Post was a financial and influential juggernaut with zero corporate pressure from nonexistent Big Tech overlords.

How, I wondered in 1987, could I rise above my station and break out of the brat pack? The answer came to me one night: video movie reviews. The Post had a new film critic, following the Arnold dismissal, and a famous TV critic, Tom Shales. But now a new medium, home video, split the difference, and no one was covering it. I made my pitch to the Style Managing Editor, offering myself as the new home video critic. He showed little interest in my offer. I went to the TV magazine editor, Mike Hill, and got a similar reception. That left me only one mad play with potentially humiliating finale — Ben Bradlee.

I made an appointment with his sweet assistant, Pat, who scheduled me between Senator X and Congressman Y. Bradlee had a transparent glass office the entire newsroom could look into and shudder. I felt as if everyone watched me enter it. He sat behind his Olympian desk looking down at me like Zeus while I babbled some statistic about VHS movies drawing more viewers than theatrical ones. “Got one of those damn things myself but don’t know the first thing about them,” Bradlee said. “That’s the point,” was the last thing I remember saying before skulking out of his office.

The very next day, TV Channels Editor Mike Hill walked up to me and said, “Hey, Lou, I’ve been thinking about your home video idea, and I think we ought to do it. Start this weekend.” My video column became a popular fixture and led to my hiring as a national reporter at USA Today, right across the Potomac River.

I recalled my Post days when reading about Felicia Sonmez and her social media whines about her “sexist” colleagues. These were not young copy-aides like we were but adult professional journalists. The men who ran the Post back then, Bradlee, Simon, Woodward, would have canned Sonmez on general principle after one tweet, ideology notwithstanding. We were just kids right out of college, all but me committed liberals — including my radical feminist beauty girlfriend, Laura — and it would never have occurred to us to blast each other in public. That tradition came later from my Hollywood circle.

Four years ago, at the D.C. book signing for my second novel, Paper Tigers, an updated fictionalization of my days at the Post, every one of my friends in the book showed up, except my lost love, Laura. They even kindly complimented the bit I read aloud, a speech from my protagonist to Laura, though they disagreed with its politics: “I’m pro-life and pro-God. I choke up at the Star-Spangled Banner. I think housewives should be role models and marriage just between a man and a woman — and you can’t switch from one to the other. But right now, none of those mean a damn. The only thing worth fighting for is you.”

Felicia Sonmez didn’t read the book. If she had, she might still have a job.

Image: This file is licensed under the Creative Commons Attribution-Share Alike 2.5 Generic license.