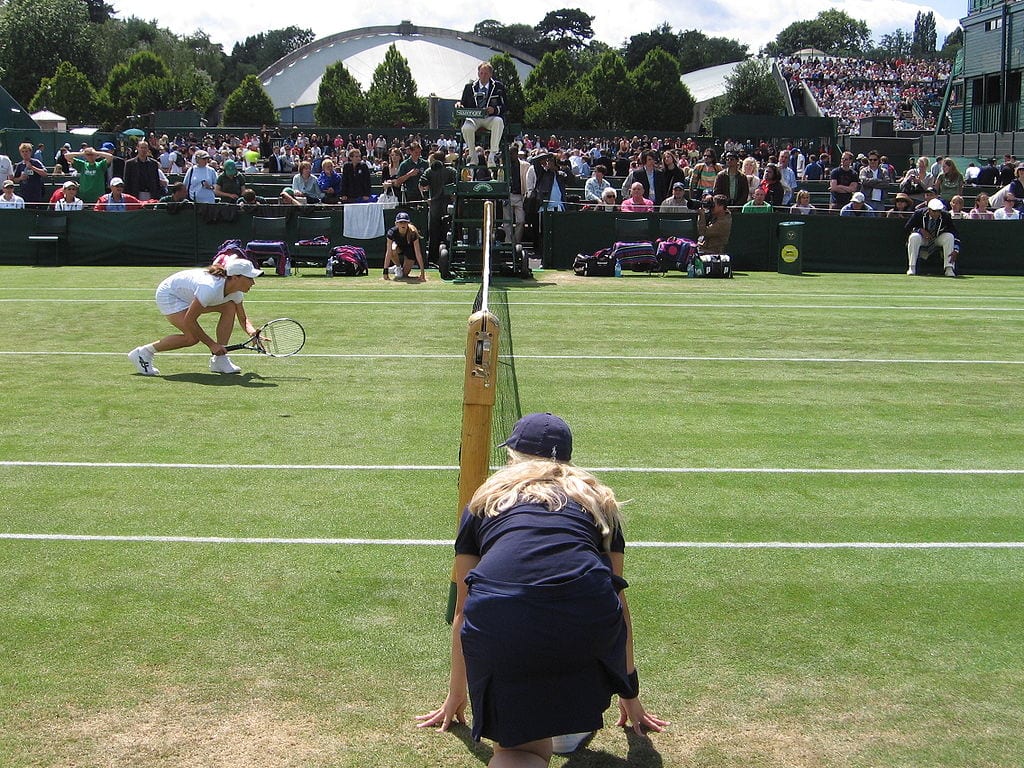 Serena wins the ladies’ draw, Roger the gentlemen’s. Or so the unstoppable momentum of the best players of the 21stcentury would suggest. But it ain’t over till it’s over, and Miss Williams next faces a Camila Giorgi who is enjoying the run of her career and, as one of the most unpredictable players on the Tour, she may pull off an upset.

After all, this is upsetsville. Miss Williams is one of only two big names to reach the second week among the ladies. The other, 7th seed Karolina Pliskova, got whipped by Kiki Bertens on Monday. Miss Williams whipped the other magnificent tennis mom, Evgeyina Rodina, who graciously noted how remarkable it was for a recent mom (Mrs. Ohanian’s child is less than a year, Mrs. Shteingart’s is 6) to play with such energy and skill.

The fact is, Serena Williams has a history of life-threatening illnesses and giving birth gave rise to new threats, including pulmonary embolism. She suffered a pectoral tear in a match earlier this year. But this is the best player in the world, woman-wise. At the All-England, they use “ladies” rather than “women” in the draw, and refer to Mrs. (married name) in calling points, and encourage the media, to little avail, to follow. They also favor naming ladies by the married names, thus Chris Evert was Mrs. Lloyd for a while, but it appears that the name recognition is such that they saw little point, commercial or sporting or formal, to insist on Mrs. Ohanian, and moreover Miss Rodina was not referred to as Mrs. Shteingart, and who cares, anyway, and moreover, whose choice is it, hah? The guy’s? The doll’s? The stuffed shirt tournament officials?

Stuffed shirts or not, we at TAS give them credit for not interrupting the show on finals day, which should be toward the end of this week, even though the final at some big event in Russia is scheduled to overlap. Soccer or what-all, that they call football in England. The big deal is that this would be the first such final for the England team since 1966.

In fairness, you have to admit it is a pretty big deal, it is this sport’s world series, and there is a high level of football excitement in England this week. They still must get past Croatia, a small country. France looms, if they get past little Belgium. Waterloo is a suburb of Brussels, note. Two European powers against two little countries, victims of big power aggression. On the other hand, Belgium aggressed Congo, and Croatia had the ustasha. Let the sinless cast stones.

Once again, TAS is absent from England’s Grand Slam event, because Mr. Tyrrell was unable to make contact with Boris Johnson, former mayor of London and a great tennis man and writer (and parachutist), and finagle some seats. It is not at all sure Mr. Johnson could have got them for us, seeing as how the All-England Club grants few favors, and why should it? Moreover, Mr. Johnson was, as we now know, immersed in the conspiracy against Mrs. Theresa May and was joining with others in the Cabinet to overthrow her. As it turned out, only he and Mr. David Davis made a move against her, and it remains to be seen whether it develops legs and they can do to her what those rascals led by Michael Heseltine did to Mrs. Thatcher in 1986. Those toff blackguards!

Mr. Johnson and his confrères are unhappy with the way Mrs. May has been conducting negotiations with the Brussels Euros in view of getting Britain out of the European Union, as demanded by the voters a couple years ago. They think she is not going to get Britain a good deal, and they also want out, now. No more waiting. Well, Mr. Tyrrell and I, who tried to draft Mr. Johnson for the Republican Party nomination for president in 2012 (he is New York-born and was, at the time, the immensely popular mayor of London), have a low regard for blackguards, but we grant that Britain must rule the waves (next to the U.S. Navy) and the EU seems to be one of these stick-in-mud globalist organizations, according to Steve Bannon, that would look unkindly on the Union Jack flying where the sun never sets.

So obviously, there is much going on to distract English eyes from Wimbledon, which makes those All-England Club stand on loyalty to agreed upon schedules, not to mention ticket sales, all the more respectable. And they are right that non-football-watching tennis fans would be mad, because with all the upsets, it is a wide open tournament, if you discount the inevitability of the finals.

Miss Williams certainly appears to be back in her old form, which is to say top form. She allowed only four games to the other mom, Evgeyina Rodina, who outplayed the young American star Madison Keys in the previous round and had to overcome the handicap of being from Moscow, where they do not have many tennis courts. On the other hand, Miss Williams grew up in Compton, where there are tennis courts but not terribly well maintained ones. Her father insisted, however, and her big sister Venus, a superstar and multiple past champion here, who exited early this year, inspired her.

Against Miss Giorgi, it is likely to be another ball game altogether. It could be no game at all — the small but fierce Italian has a history of flaming out swinging, or somehow managing to maintain discipline for the length of a whole match and when she does that, she is superb. Due to her family background, she is wildly popular in Brazil, Italy, and Israel. That she is also wildly pretty under the stern and unsmiling demeanor may also have something to do with it, but there are some roads down which even sports writers must not go, so forget you read this.

It would seem to be in the bag for Mr. Federer, too, which would bring him his astonishing ninth All-England Championship, if you go by the ease with which he moved through the first week. He has yet to lose a set. Obviously there are great players ahead, but it looks like old times, a showdown with Rafael Nadal at the end of the draw. Mr. Nadal has not lost a set either. Novak Djokovic, who beat Mr. Federer here in the 2014 and 2015 finals, is doing well, considering his long layoff and elbow surgery. That is about as much as one dare say by way of what-if’s.

Amazingly enough, there is another American still standing, and even more amazingly, it is a he. Despite all their up-and-coming youth and talent, American men are still mostly failing on the grass. If it is any consolation, which it is not, there were many five-set losses last week, including head-shaking disappointments for Jared Donaldson and Frances Tiafoe, who lost their momentum after taking the first two sets.

However, John Isner defeated the Greek phenom Stefanos Tsitsipas in the round of 16 today, and hope endures. It balances the disappointment of Mackenzie McDonald’s ending of a great run which, among other things, if the Californian continues his resilience in tournaments, shows that playing college ball does not necessarily stunt a later pro career.