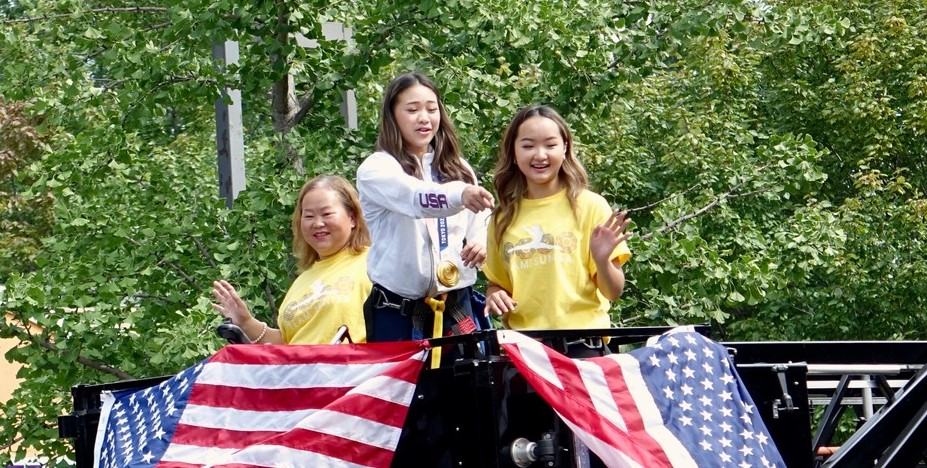 What an Olympic farce! Tokyo Summer Olympic viewership dropped around 50%. NBC’s advertisers hit hardest. The American Spectator readership probably is counted among those who no longer watched the games. One of my children loves the Olympics and so I watched with him when I could. My big obsession? The United States beating China for medals overall and for gold medals, in particular. America beat China, only just. Some of their athletes disastrously cracked under pressure. America got lucky.

The absence of fans resulted in a deflated balloon vibe for nearly every contest. It was clear that some athletes derive energy from people cheering for them. Without it, the quiet echo-y spaces seemed lonely. That miserable energy existed at the opening ceremonies. The teams walked in to a cavernous stadium with no one cheering. The only teams that had any energy? Argentina and America.

But the real mood killer for America, specifically? Megan Rapinoe. Americans will tolerate a lot from people who represent them. Ungrateful and whiny, but you still win? Well, Chicago Bulls fans put up with Scotty Pippen for years. Ungrateful and whiny and a loser? Americans will cheer for when you lose — even when the athlete represents America. Megan Rapinoe has made a living off of complaining and protesting while running around kicking a ball. Then she led her team to a shocking first round loss. The team clawed their way back to bronze. No one cared. Subway store owners are begging the corporates to drop Rapinoe’s sponsorship, she’s affecting sales so badly.

Other woke athletes like America’s men’s basketball team (who also lost in the first round giving many Americans grim satisfaction) and the hammer throw chick who finished 11th deflated the energy for watching the games. Do these athletes understand that the majority of Americans will never know the wealth and fame they enjoy? Americans are completely fed up with superstar athletes complaining about their oppression. The Olympic viewership reflected this disgust.

The swimmers saved the mood. Watching world records being crushed and seeing the swimmers’ joy, was fun to watch. Some of these athletes have grown up in four year increments. Calaeb Dressel wowed and inspired. His first win overwhelmed him. It was beautiful to watch.

And then, the much anticipated women’s gymnastics began. Suni Lee deserves the attention. When a competitor quits, the focus should be on the one who persevered. (Why is Simone Biles, for example, in the first interview position, here? She quit. Suni Lee should be in the first spot.)  That was Suni Lee. She took a difficult situation and overcame. She shined. Watching Lee on the uneven bars is something to behold.  She literally soared and made it look graceful and effortless. Champions rise to the challenge. Lee is a champion and deservedly so.

Self-proclaimed Greatest of All Time (G.O.A.T. for short) Simone Biles cracked under the pressure. She had a bad vault and then quit the team competition. Her team won silver without her. This whole situation is bothersome. Any team-sport athlete knows the agony when the star gets an injury. When the star quits? That’s a different situation, entirely. Gymnastics is dangerous. American gymnastics has the reputation for looking the other way while child athletes were abused. It was toxic. The situation, ostensibly, has changed. Simone Biles committed to the team even with this history and burden. Not only that, she put the added pressure on herself with her own hubris. It’s better to leave to the historians who the “GOAT” is. That kind of arrogance begs for a comeuppance. Biles had one. No real competitor, certainly no competitor who views herself as the best, would enjoy sitting on the sidelines while the next in line wins the medal that could have been hers.

Should Biles be shamed or celebrated for her choice? That’s an unanswerable question. Much of her experience is internal. She’s a fantastic athlete. Should the media shower her with more attention than the actual winner? No. It’s unfair. Being an Olympian means being better than the average person. It means triumphing in the time of extraordinary difficult and under circumstances that would break an average person. Simone Biles wasn’t the only one to crumble. The Chinese gymnastics team fell apart en masse. Other world champion athletes struggled. It happens. The Olympics are special because they remember those who overcame and shined.

Track and field revealed greatness and illuminated stories. In case you haven’t already boycotted Nike, maybe this story about how they treated Allyson Felix, the most decorated track and field Olympic athlete in history, with 11 total medals, will get your attention. Ms. Felix wanted to have a baby. Nike didn’t like the risk having a baby posed to their brand endorsement so they slashed her contract. Ms. Felix revealed the negotiations and walked away, had her baby, and came back afterwards to win again. She started her own brand, was taken on by Athleta for sponsorship, and not only won gold in Tokyo she triumphed as a mother, too. Nike has since changed their contracts with women athletes. Just to be clear, Nike will sponsor a quitter like Colin Kaepernick and pay lip service to China, but could find no generosity for a top-tier athlete who wanted to become a mom.

There were other great stories from the Olympics. As a friend groused, the coverage was America-centric and basically a mish-mash, but only certain American stories even got told. You wouldn’t know from watching the interviews the heroes of the Hmong community were refugees from the Vietnam war who fought the communists alongside America. Suni Lee was from this community of freedom fighters.

How about that female wrestler Tamyra Mensah-Stock? She won gold, loves America, lives in Texas, is Christian, and is married to a white guy. Talk about busting narratives. There have been no in-depth discussions about her motivations or her life, no extensive biographical exposés on NBC. Why not? She is the first black female American wrestler to win any medal and she won gold.

How about the women’s volleyball team led by legend Karch Kiraly? They won, driven by their coach, a child of Hungarian immigrants escaping communism. Another great story!

From around the world, there were various inspirational athletes. One of them, who immigrated  from Ethiopia to the Netherlands at 15, did something that anyone who knows running knows is nigh-to-impossible: ran the 10k, 5k, and 1500 and medalled in all of them. Sifan Hassan did this. Her example and historic feat deserves more recognition.

Over and over again, athletes from war-torn states escape to freedom in the West and find success. This is especially true in America. These stories, far from painting America in a negative light, show what America and freedom do for the human spirit: they create greatness.

NBC and the Olympians they focused on were often ambivalent about America. Did this internal incongruence affect performance? It’s difficult to play and win when under the banner of a place one believes is prejudiced, bigoted and unfair. Did this belief affect the performance of women’s soccer players or the basketball players? The ambivalence certainly seemed to affect the muted, but American-exclusive coverage.

With the events on different channels and difficult to find, the boring interviews, knowing the results before the events, and general bad attitudes by some American athletes, American viewers bailed.

Hopefully, the conflicted athletes and the news media will get their collective acts together for the games in three years. Americans and the athletes, themselves, deserve better.

The infectious joy of Tamyra Mensah-Stock, the stunned awe of Caelab Dressel, the humble grit of Allyson Felix, the passionate intensity of Karch Kiraly, the astonishing athleticism of Sifan Hassan, and the soaring grace of Suni Lee deserve more attention as do their back stories. American Olympians found the freedom to pursue their gifts and become the greatest. Perhaps if the media focused more on the greatness of America that frees people to be great, more Americans would watch the games.