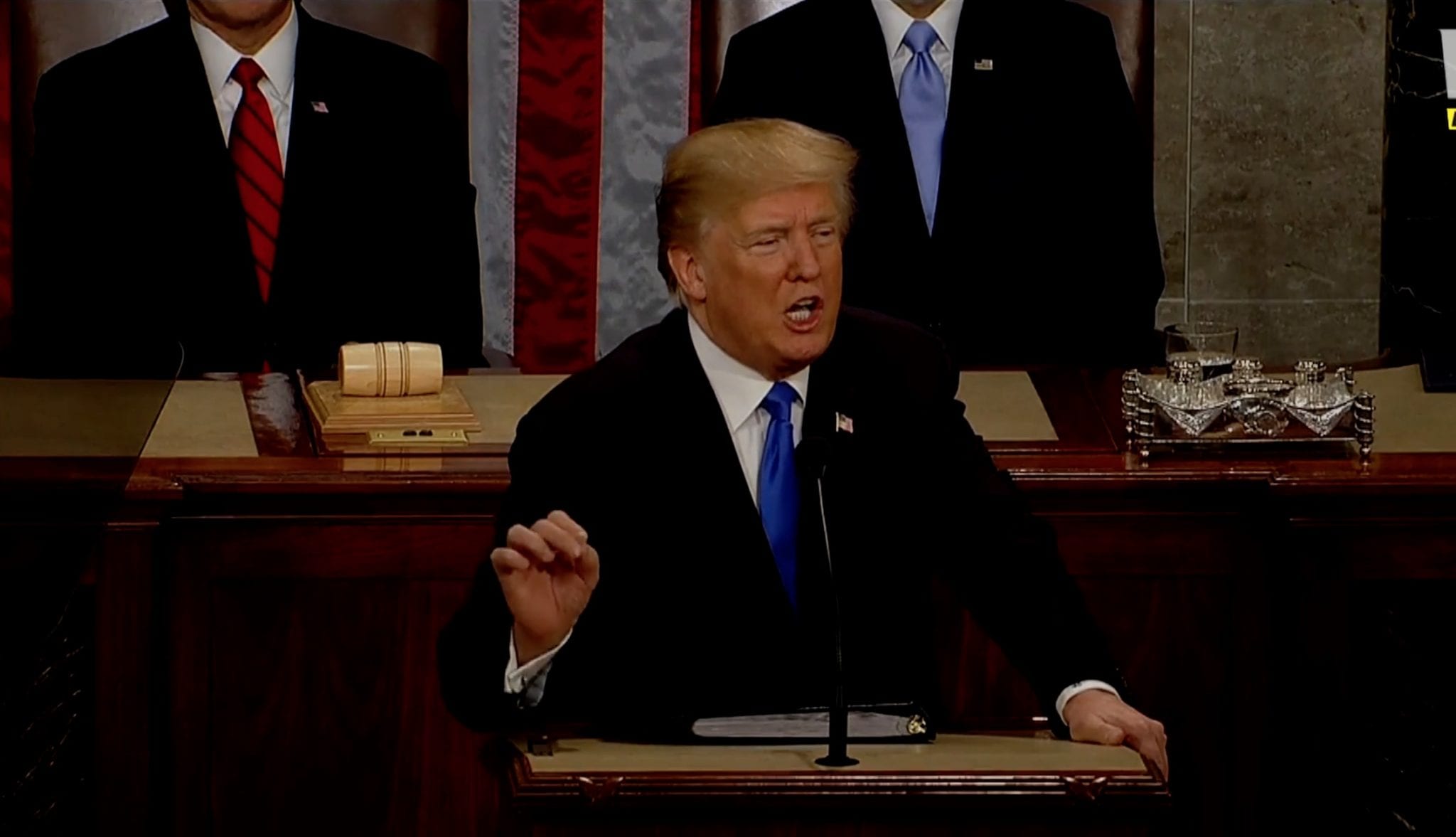 By most measures, Donald Trump’s State of the Union speech was a rollicking success. He was on script, upbeat and even warm, albeit a bit long-winded. Even when he talked about immigration, he took cues from Ronald Reagan by focusing more on the “city on the hill” and less on the “build a wall” theme. I never liked the way Reagan started the practice of calling out special guests, but it seems popular and Trump was fully in keeping with the Gipper.

Unfortunately, on Tuesday night the president also embraced perhaps the worst aspect of the Reagan presidency. Namely, he hinted at the need for a renewed drug war in light of the latest “opioid crisis.” Conservatives ought to be leery about this sort of thing. Do you ever recall a time when there wasn’t some drug-related crisis (crack cocaine, methamphetamine, and now pain killers)? Has the federal government ever succeeded in eradicating a drug scourge?

“In 2016, we lost 64,000 Americans to drug overdoses: 174 deaths per day. Seven per hour,” Trump said. “We must get much tougher on drug dealers and pushers if we are going to succeed in stopping this scourge. My administration is committed to fighting the drug epidemic and helping get treatment for those in need, for those who have been so terribly hurt. The struggle will be long and it will be difficult — but, as Americans always do, in the end, we will succeed, we will prevail.”

Many Republicans applauded those remarks. But here’s a hint: That (and the call for the socialistic paid family leave) was the rare part of the speech that appealed to Democrats. Some Democratic officials argued that the president hasn’t gone nearly far enough and didn’t offer a detailed plan even though the administration declared this a public-health emergency in October. The Left has been trying to make hay out of the president’s “inaction” on opioids.

Dour Democratic faces during the speech were a hoot, but so was the phony symbolism. “I’ll be wearing a purple ribbon during the President’s State of the Union to raise awareness about the opioid epidemic & substance use disorders,” Democratic Sen. Jeanne Shaheen tweeted before the speech. “This is an important opportunity to send the message that more must be done to address this crisis.” Other Democrats, including Massachusetts Democratic Sen. Elizabeth Warren, wore ribbons, too.

Sure, this is a serious national problem. I can’t even count the number of heroin needles I’ve cleaned up from the backyard of one of my rental properties, in a historic small town that should resemble “Mayberry” rather than “Breaking Bad.” But the battle against oxycodone, fentanyl, and heroin is the latest cause for those who always think the feds must “do something.” What federal officials want to do almost certainly will be the wrong thing.

Democrats presumably want to throw money at the problem by creating new federal programs and cracking down on pharmaceutical companies. Republicans want more law-enforcement resources, international interdiction efforts, and harsher sentences for drug dealers. Many people want to further regulate and punish doctors who over-prescribe painkillers. Yet the current drug laws and regulations have helped exacerbate the problem they promise to eradicate.

“Ninety-four percent of opioid-addicted individuals who switched from prescription opioids to heroin reported doing so because prescription opioids ‘were far more expensive and harder to obtain,’” according to the Drug Policy Alliance. When people can’t get the pain relief they need through legitimate channels, they buy drugs illicitly and can’t be sure of the quality of the drug or the dose. This leads to an increase in overdoses and deaths.

It doesn’t help that the Food and Drug Administration has not yet made naloxone — a prescription drug that counteracts overdoses — available on an over-the-counter basis, according to Jeffrey Singer of the Cato Institute. Here’s a good opportunity for an administration that is concerned about bureaucratic red tape (and wonderfully touted the ability of patients to try experimental treatments when they face terminal illness) to do something small and tangible about this problem.

The devil is in the details, but there’s little reason to think the Trump administration will take a more reasonable approach toward drug policy in general. Attorney General Jeff Sessions is an anti-marijuana warrior whose views echo those common in Reagan’s days. The department has overturned the Cole Memorandum that guided federal prosecutors to limit their interference with state marijuana laws. Conservatives supposedly believe in the rights of states to make such decisions for themselves — not just for the things they personally support.

Trump ally Dana Rohrabacher, a Republican congressman from Orange County, Calif., again managed to pass his budget amendment that keeps Justice from meddling in state marijuana issues — and has introduced a bill that would permanently keep the feds from bothering states that have chosen to legalize or medical or recreational weed. Candidate Trump called for the states to make their own decisions on marijuana, but his AG is taking the opposite approach.

In fact, liberalized marijuana laws could help reduce the demand for pain killers and thus overdoses. “The striking implication is that medical marijuana laws, when implemented, may represent a promising approach for stemming runaway rates of nonintentional opioid-analgesic-related deaths,” according to a study published in JAMA Internal Medicine. People suffering from pain need realistic alternatives rather than expensive and deadly federal drug wars.

Many conservatives have long understood the ill-effects of letting the federal government wage a drug war. William F. Buckley argued to the New York Bar Association in 1995 that “more people die every year as a result of the war against drugs than die from what we call, generically, overdosing. These fatalities include, perhaps most prominently, drug merchants who compete for commercial territory, but include also people who are robbed and killed by those desperate for money to buy the drug to which they have become addicted.”

Buckley also pointed to the ill-effects on our liberties, given that the War on Drugs led to “the astonishing legal weapons available now to policemen and prosecutors; of the penalty of forfeiture of one’s home and property for violation of laws which, though designed to advance the war against drugs, could legally be used — I am told by learned counsel — as penalties for the neglect of one’s pets.”

And then there are those expanding prison populations, with all the financial and human costs involved. The president admirably vowed to “embark on reforming our prisons, to help former inmates who have served their time get a second chance at life.” Like most of his speech, this promise confounded his critics and charted a constructive course. It was one of many lines that deserved hearty applause. Trump needs to take a similarly thoughtful approach with drug policy.

Steven Greenhut is western region director for the R Street Institute. Write to him at sgreenhut@rstreet.org.