A few days ago, the first employee to show up at the office of the Old Mission Santa Barbara discovered something very, very wrong. During the night, an intruder had entered the mission grounds, hacked off the head of a life-size bronze sculpture of St. Junipero Serra, then doused the mutilated statue with red paint.

Over the last 2000 years, quite a few Catholic saints have been beheaded, but, with the exception of a few years of iconoclasm during the Reformation, beheading statues of the saints has been rare.

Sadly, the Santa Barbara incident is not unique. In August in the Mission Hills area of Los Angeles, vandals painted the head and hands of a Serra statue red, and spray-painted “MURDER” down the front of the priest’s Franciscan habit. The sculpture depicts Serra with his arm around the shoulders of an Indian child—on the figure of this young boy some delinquent painted a swastika. The sculptures stand in a park by Mission San Fernando. CBS reporter Crystal Cruz asked a visitor to the park, Cristian Mendoza, his thoughts on the defaced statue. “Everyone’s entitled to their own public opinions and thoughts,” Mendoza said. “But once it gets to this level I don’t think it’s right.”

In September 2015, five days after Pope Francis canonized Serra, vandals broke into the grounds of the Carmel Mission where St. Serra lies buried. The hooligans splattered paint on a crucifix, on a statue of Serra — which they toppled, on the doors of the mission, and on tombstones in the cemetery. On one stone they wrote, “SAINT OF GENOCIDE.” A few weeks later in Monterey, a granite sculpture of Father Serra was beheaded. The statue stood in the Lower Presidio Historic Park, where it was installed in 1891. Then, in November 2015, vandals splashed red paint across the doors and surrounding walls of the Mission Santa Cruz.

While at Carmel staff and volunteers cleaned up the mess in time for a Mass celebrating Serra’s canonization, there is a different tone coming from Santa Barbara. Monica Orozco, executive director of the mission, told Brooke Holland, a reporter from Noozhawk news, that the Franciscan friars who staff the mission and the historic site’s administrators have not decided whether to have the statue restored and reinstalled. “We will let people know once we know more information,” Orozco said, which is a pretty tepid a response to an act of sacrilege. 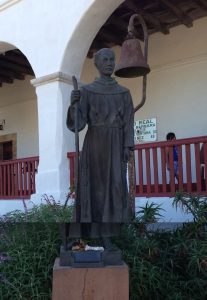 Serra was born in 1713 on the Spanish island of Mallorca. When he joined the Franciscan order, he took the name Junipero, in honor of one of St. Francis of Assisi’s first disciples. For 800 years Franciscans have enjoyed a reputation as humble, devoted men, yet Father Serra has become a contentious figure. Some Native American activists and their supporters charge Serra with flogging Indian converts who tried to leave the missions, of damaging the eco-system of California by introducing European livestock that destroyed much of the plant-life and drove off the wild game the Indians depended on for food. Some even see him as an agent of Spanish imperialism who, through the mission system, was responsible for the Indians’ loss of their culture and even their languages. Shortly before his canonization, a dozen protesters gathered outside Los Angeles’ Cathedral of Our Lady of the Angels chanting, “Serra was no saint! Serra was the devil!”

But if Father Serra has detractors, he also has defenders; perhaps foremost among them is Robert Senkewicz, a professor of history at Santa Clara University where he specializes in the history of California. In a May 2015 interview with the National Catholic Register, Senkewicz explained that the missionaries thought by keeping the Indians in the missions, they were protecting them from exploitation by Spanish and Mexican soldiers and settlers. And Serra was genuinely protective of his converts — he didn’t trust soldiers to treat the Indians justly or humanely.

To protect the Indians of California, Serra lobbied the colonial government in Mexico City to make the missions autonomous from government and military authorities, and to name the missionaries the legal guardians of the Indians. Some historians have described this decree, known as “The Regulation,” as a kind of Bill of Rights for the tribes of California. Certainly it protected the California Indians from the cruelty and abuse so many native people had suffered elsewhere in Spanish America. Furthermore, Serra and brother Franciscans saw themselves as benefactors who taught the tribes the way to heaven, and introduced them to European technology, as well more efficient and productive methods of raising crops. In other words, the Franciscans worked to transform the Indians into Spaniards. In the process, the Indians did in fact lose their ancient culture.

It is also true that disaffected Indians who left the mission were brought back and flogged. So were soldiers who deserted the garrison. By the standard of the times, this was considered a just punishment, but it doesn’t go over well today.

Serra’s critics — and as the repeated acts of desecration prove, they have an extremist streak — seem to resent him for having had the bad taste to live and die in the 18th century. What they overlook is that Serra genuinely, deeply loved his Indian converts. And that loved was returned. At his death the mission Indians went into mourning.

Ultimately, this period in California’s history is a complicated one — the clash of civilizations always is. Islam erased centuries of Roman civilization and Christian culture in North Africa. The Aztec invasion of Mexico was not welcomed by the tribes that were subjugated. In 17th century Canada the Iroquois almost wiped out the Hurons. I could go on, but you get the idea.

There is a widespread misconception that when the pope declares someone a saint, he means that this individual was perfect. Not so. As is true for every human being who has ever lived, saints had flaws. Canonization recognizes a person who strove not just to be good, but to be virtuous to a heroic degree. Junipero Serra’s canonization did not declare all of his actions and opinions to be saintly, but an examination of his life and intentions and motives reveal a man who deserves the title, “Saint.” And who, in spite of the chants of demonstrators and the hooliganism of vandals, was definitely was not a devil.

Thomas J. Craughwell is the author of the newly released 101 Places to Pray Before You Die: A Roamin’ Catholic’s Guide.