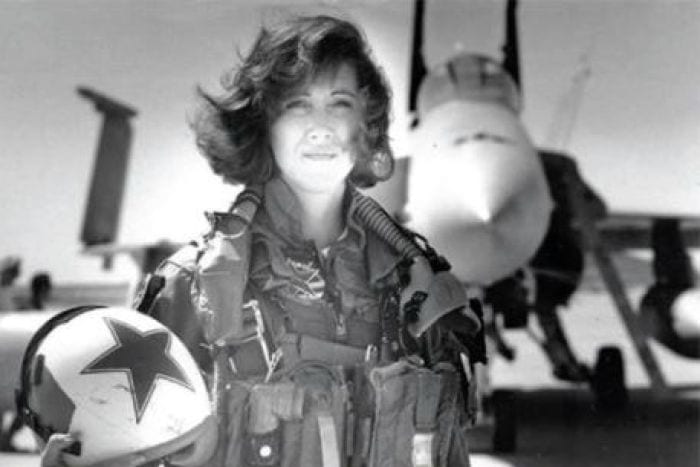 It’s a pretty safe bet that, with the possible exception of former First Lady Barbara Bush, the two private citizens who most dominated the legacy news media this week were Southwest pilot Tammie Jo Shults and former FBI director James Comey. Both have occupied positions of trust for decades, but it’s pretty clear that only one is actually trustworthy. Read the following and try to decide which of the two possesses genuine character:

On Tuesday Captain Shults contacted air traffic control shortly after 11AM and, after identifying her Boeing 737 as Southwest 1380 and noting that it was carrying “149 souls,” she calmly advised them that she had a serious in-flight emergency that required her to put the plane on the ground immediately. ATC then asked, “Where would you like to go? Which airport?”

The following is a condensed version of Captain Shults’ response:

The closest one, Philadelphia. We’re single-engine descending… We have a part of the aircraft missing… If you would have them roll the emergency trucks. It’s on engine number 1, captain’s side… could you have the medical meet us there on the runway, as well? We’ve got injured passengers.

Shults conveyed all of this in the same unemotional tones most people would use to order a ham sandwich. She then landed the plane as smoothly as if she were putting it down after a routine flight. Her next act, after graciously thanking the ATC guys for their help, was to go back and speak with each of the passengers as she and the rest of the crew helped them off the aircraft. Then she went back to work without a single word to the media.

Now to Mr. Comey: That gentleman began his week with former Clinton lackey, George Stephanopoulos, discussing his self-aggrandizing and incredibly disingenuous book, A Higher Loyalty, comparing the President of the United States unfavorably to himself. Then, evidently not satisfied with that grotesque display of perfidy and moral preening, he published an op-ed column in which he delivered himself of the following assertion:

Trump is a liar and morally unfit for office.… Leaders make hard decisions by drawing upon external reference points, usually a combination of things. Some draw on religious traditions, some draw on logic or philosophy, some on history, some on tradition. Trump’s only reference point appeared to be internal; He is driven by what decision, what course of action will get him the affirmation he so craves.

Comey clearly has a gift for unintentional irony. This character has spent the last eighteen months attempting to convince the nation that he is a cross between Nathan Hale and Socrates. Indeed, since amateur psychoanalysis seems to be in fashion, it is difficult to think of any public figure with a more obvious martyr complex than James Comey. And, the combination of pomposity and hypocrisy of his advice to the President is breathtaking:

I’m trying to tell the truth, including about myself. And as for Trump, if he reads my book I would hope that he would recognize something similar. The truth still matters in America, and that as the leader of this nation he should be always working to hold himself accountable to this idea. Of course, there’s almost no chance that he will read it.

This, you will note, was written by a man who has just been officially referred to Attorney General Jeff Sessions for criminal investigation for giving false testimony to Congress. James Comey wouldn’t know the truth if it were served to him on a silver platter, garnished with watercress. He obviously lied to Congress about the FBI investigation into Hillary Clinton’s mishandling of classified information. As the referral letter phrases it:

[O]n September 28, 2016, during a hearing before the House Judiciary Committee, former Director Comey replied, “After,” following Rep. John Ratcliffe (TX-04)’s question on the timing of Comey’s decision: “Director, did you make the decision not to recommend criminal charges relating to classified information before or after Hillary Clinton was interviewed by the FBI on July 2?”

It is now known, of course, that Comey was lying like a rug. He drafted an exoneration memo regarding Clinton at least two months before FBI agents interviewed her. Moreover, as the referral letter goes on to point out, “At that point 17 interviews with potential witnesses had not taken place, including with Clinton and her chief of staff, according to the Senate Judiciary Committee.” And Comey has the guts to call Trump a liar?

Unlike Captain Shults, who is a heroine to the “souls” she saved last Tuesday and an inspiration to all Americans — male and female — Comey is a run-of-the-mill Beltway round heel. Shults’ only public statement expresses regret that she was unable to save everypassenger on her plane. Meanwhile, Comey congratulated himself for his corruption. So, returning to my original question, which of these two possesses real character?