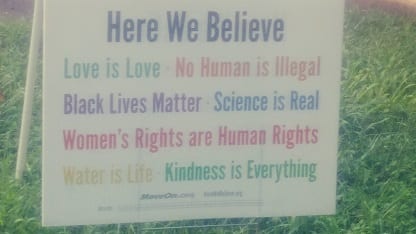 — Don’t you wish that you could get a dime for every time the mainstream media will use the death of Senator John McCain to bash President Trump?

— The NFL season opens in about 11 days.  I rarely read George Will anymore, so can one of the readers let me know if he’s published his annual Professional-Football-Is-A-Plague-On-The-Nation column yet?

— This above sign has been popping up quite a bit in the Washington, D.C. area the last few months.  You can order yours here!  Anyway, I think a little translation is in order:

“Black Lives Matter.”  If you don’t think that the biggest problem facing blacks is police shootings, then you are a racist.

“Kindness is Everything.” Isn’t that kind of silly? If a thug is breaking into my home, do I really need to show him kindness? It would seem that in that context owning a gun would be everything.