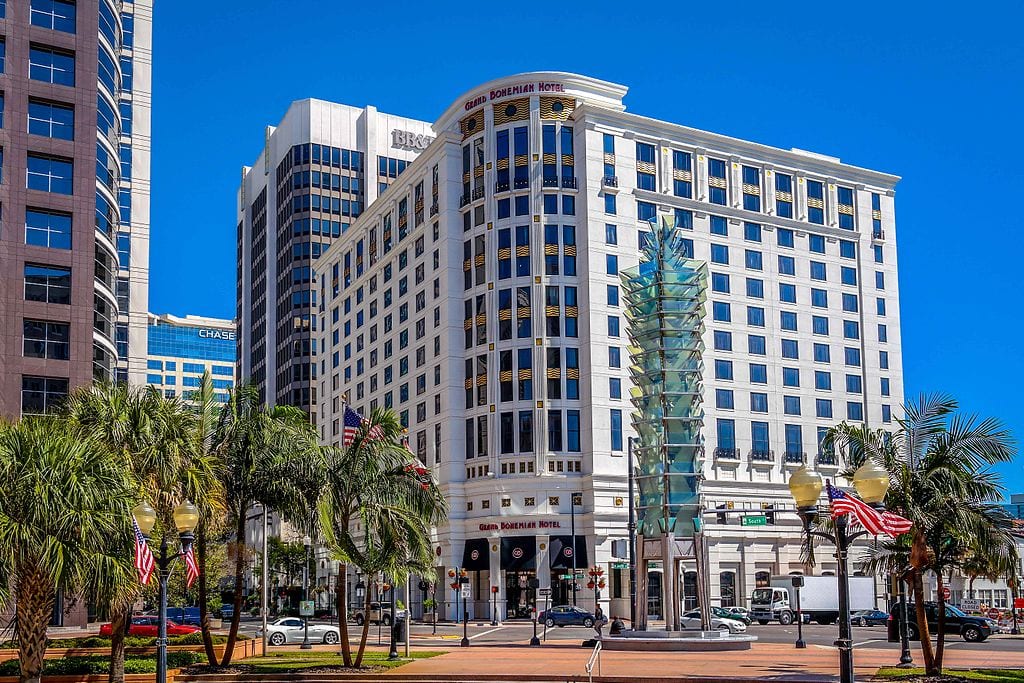 One of the poshest hotels in Orlando is the Grand Bohemian Hotel. The champagne socialist Andrew Gillum campaigned in Orlando on Sunday, and I suspected that if I walked into that hotel on Monday morning I would find some of his Bolshie operatives staying there. Sure enough, I found one, a worried-looking hack wearing a “Gillum for Governor” t-shirt hunched over his campaign phone in the lobby, casting furtive glances in my direction.

The night before, Gillum had given a demagogic speech before the Muslim community in Orlando at the Apna Bazaar, telling 200 or so supporters of Sharia law that Trump and DeSantis are “dangerous.”

“While my opponent is running around the state, stirring up fears and hatred and division, we’re here giving people a reason to vote for something and not just against something,” said Gillum, according to local press reports. “Instead of him being willing to stand in solidarity with our communities, it’s the same candidate who ran a commercial enlisting his family to build Trump’s wall.”

Fittingly, Obama, another champagne socialist with a severe case of Islamophilia, is set to campaign for Gillum this week in Miami. Never mind that Obama proved useless to Hillary in Florida. No matter, figures Gillum, who has staked his victory on help from the far left, which included this past weekend a visit from the left-wing California dingbat Kamala Harris. Gillum isn’t quite heedless enough to invite Maxine Waters down to Florida, but he has called her one of his political heroes. (DeSantis should work all of Gillum’s nihilistic lefty political allies into a campaign ad.)

True, Obama will help Gillum in South Florida, which is deep blue, though perhaps not as much as Gillum thinks. I am told that South Florida’s limousine liberals deplore Floridians up north — the folks who live in the part of Florida the New York Times calls lower Alabama — so much so that “they would like to start their own state,” in a bratty spirit similar to the California separatist movement, said a Daytona Beach bartender to me. Still, South Floridians “don’t like high taxes any more than Floridians up north,” he said. “I am not sure if they will turn out in big numbers for Gillum.”

Like Obama, Gillum allows himself a broad range of hypocrisies: he touts Bernie Sanders-style egalitarianism while snatching from lobbyists the unequal advantages of power (a $1,000 ticket to Hamilton, a luxurious trip to Costa Rica, and, as recently reported, a $4,000-or-so dinner); he calls for “unity” and “multiculturalism” before a crowd of Sharia-supporting, self-segregating Muslims; he decries a lack of “civility” while accusing President Trump of “racism” on the basis of a tendentiously interpreted tweet.

All you can say for Gillum is that he is taller than DeSantis, which unfortunately counts for a lot in politics. DeSantis, next to Gillum, looks short and dumpy and isn’t much of a retail politician. I certainly don’t hold that against him. But Floridians looking for a little flash and glad-handing might. Gillum is a young and cocky thirtysomething who manages to be even more pompous and affected than Obama. Both are community organizer types who like to stay at the Ritz.

I am surprised Prince Harry and his annoyingly actressy wife haven’t endorsed Gillum yet. Remember Obama’s chat with that member of British royalty? Obama and the prince traded thoughts on equality before Obama wrapped the interview up by whining about the commoners’ “traffic” he now hits without the perks of the presidency.

How dare Trump call me a “thief,” Gillum, who has called Trump much worse and wants him impeached, harrumphed on Monday (last week Gillum was whining about DeSantis calling him “Andrew”). Trump tweeted: “In Florida there is a choice between a Harvard/Yale educated man named [Ron DeSantis] who has been a great Congressman and will be a great Governor–and a Dem who is a thief and who is Mayor of poorly run Tallahassee, said to be one of the most corrupt cities in the Country!”

Sorry but Gillum is a thief, both as a bribe-taking mayor and a socialist ideologue. Indeed, his stated platform rests on promising to strip Floridians of their wealth via a jacked-up corporate tax rate, all so that Gillum’s educrat cronies can waste more money on crummy public schools. There is no difference between socialism and thievery. Gillum intends to steal from Peter to pay Paul, knowing that he can then count on the vote of Paul, as the old saying goes. Are there enough Pauls in Florida? We’ll see. Obama, as he has no doubt regaled Gillum, got elected on that redistributionist flim-flam — a posturing and destructive bohemianism that Gillum and his speechwriters can crib off while staying at the Grand Bohemian Hotel.