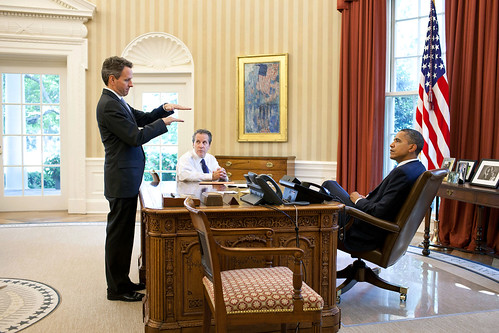 Since this spring, the Republican Party has been on record as supporting a set of principles for solving the country’s fiscal problems, namely the ideas outline in Rep. Paul Ryan’s Path to Prosperity. In short, Republicans would transition Medicare to a consumer-centered model, cut discretionary spending, and keep taxes receipts near their historical averages.

The only liberal alternative to something along the lines of the Ryan model is some form of government health care rationing coupled with massive, permanent tax increases on the upper and middle classes. Of course, neither centralized health care rationing or tax hikes poll well with the public. But neither do many aspects of the Ryan plan, yet the Republican Party rallied around it. That hasn’t been true of the Democratic Party and the liberal alternative.

This morning, President Obama finally gave the nation at least a partial acknowledgement of what his plans for the fiscal future would entail. In a Rose Garden speech, Obama called upon the supercommittee tasked with cutting the deficit to embrace massive new taxes on high income earners, as well as a number of unpopular smaller measures for cutting spending on Medicare and Medicaid. While Obama’s outlined plan wouldn’t come close to stabilizing the government’s finances, it represents a step toward Obama leveling with the public about his designs for taxes and health care.

Obama’s plan calls for ending the Bush (and Obama) tax cuts for the high-income tax brackets, which translates to about a $860 billion tax increase over 10 years. Obama would then raise taxes on the well-off by another $700 billion by “limiting deductions and exclusions for those making more than $250,000 a year” and “[c]losing loopholes and eliminating special interest tax breaks.” Lastly, the plan calls for a “Buffett Rule” that acts as another Alternative Minimum Tax to ensure that households earning over $1 million per year pay higher taxes (as a percentage of income) than middle-class workers. This last part, which hasn’t been fully defined yet, doesn’t seem to be much more than an attempt at left-wing populism on Obama’s part.

On the spending side, Obama would cut $580 billion from mandatory spending by trimming around the edges of Medicare and Medicaid. In contrast to the Ryan plan, which would constitute a fundamental reform of both programs, Obama would simply try to cut costs within the existing bloated, inefficient system. Notably, his plan would “strengthen the Independent Payment Advisory Board (IPAB) to reduce long-term drivers of Medicare cost growth.” IPAB is the controversial component of Obamacare that sets up a panel of experts to recommend and condemn medical procedures. By increasing its power, Obama is moving it closer to the “death panels” scenario feared by many conservatives and seniors, in which remote experts have the power to make personal decisions about individuals’ health care. As Avik S.A. Roy has argued in the Spectator, the IPAB is the only realistic alternative to the Ryan plan for reducing Medicare spending.

Of course, the plan sketched out by Obama this morning has no chance of becoming law. And it won’t significantly affect the deliberations of the supercommittee. What it will do is give Obama something he can use to excite the liberal base of the Democratic Party during the 2012 election. It will also, though, give Republicans a chance to point out that the alternative to the Republican-endorsed Ryan budget plan is not the status quo, but instead huge tax increases and even greater concentration of the health care market in government hands. That message has already worked in at least one election. Whether it helps define the 2012 elections will be worth watching.