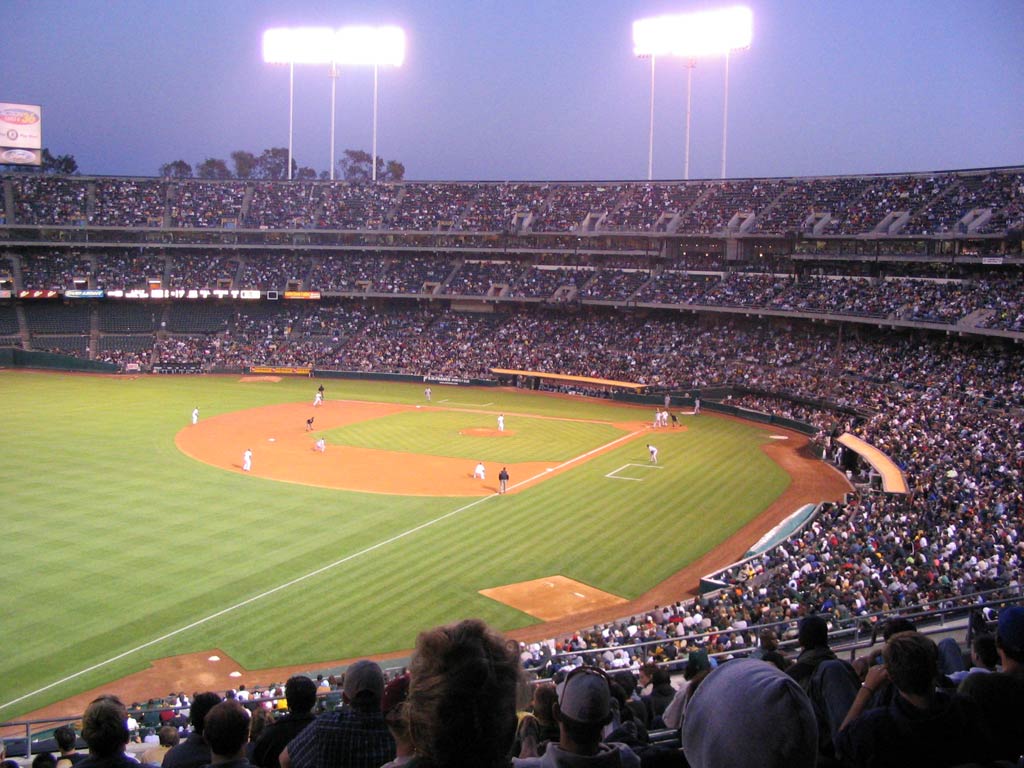 Something’s gotta give in Oakland. But this time, it might not be the government.

The city hasn’t had a great few years when it comes to sports teams. The Oakland Raiders won’t be called that for much longer, bound for Las Vegas’ glitz… and promise of hundreds of millions in city money. Less painful for Oakland is the decision of the Golden State Warriors to skip town for the other side of the bay. At least they’ll still be a Bay Area team and still have the same name. But for a city that prides itself on being the scrappier, blue-collar, underdog version of San Francisco, even that change of zip code chafes.

Now, it looks like they might lose their last claim to major league fame: The Oakland Athletics, or A’s, of Major League Baseball. The Oakland-Alameda Coliseum where they play, you see, is not good enough. Teams often claim that, of course, but this time it’s actually true: with some regularity, the dugouts flood with raw sewage, and capacity, shade, and sightlines don’t match the needs of the team anymore. The team and the city agreed to a nine-month-long exclusive negotiation period, but the A’s public offers don’t seem to be drawing much enthusiasm. The current Coliseum still has public debt associated with it from the last round of improvements in 1995; debt that the A’s estimate at over $135 million. The A’s proposed that they would take on the public debt in exchange for receiving the currently public land and stadium from the city. Of course, that’s well below the market price of the site, and it’s a moving target too: the city is paying down the debt by the day. Unsurprisingly, they’re balking.

Oakland Mayor Libby Schaaf insisted it couldn’t afford to build the Raiders a shiny new stadium. She insists the same for the A’s, who for their part have largely conceded that they will build the new stadium. But they still want a handout and they’re still seeking rent. With Oakland’s resistance to the idea, and MLB commissioner Rob Manfred claiming there are plenty of cities interested in an MLB team, don’t be surprised if we see the Oakland A’s migrating to their fourth home in franchise history.

In some ways, this would be unsurprising; in others, shocking. MLB has avoided relocation since 2005, when the Montreal Expos swapped French Canada for the Chesapeake swamp and became the Washington Nationals. But Oakland’s team does make money; according to Forbes, it’s pulling in $15 million a year, but it’s in the bottom five in the majors in team value and its television ratings in 2017 were the lowest in baseball, with fan attendance clocking in at second worst. But the Bay Area isn’t a small market, even if Oakland alone might be. In fact, it’s the seventh largest TV market in North America and sixth in the U.S. The problem is the San Francisco Giants, who pull in most of the area’s fans by virtue of being much better. At their height just a few years ago, they sold out their ballpark for 555 straight games, over three seasons worth. By capturing a small share of a large market, the A’s miss out on both the direct revenue of a large market and the league’s revenue sharing system for small markets (at least, they will after 2019 — conveniently dovetailing with a chance to leave). But buying teams stadiums or otherwise bribing them to stay is one of the most obvious failures of crony capitalism, so Oakland is likely right to refuse.

The A’s haven’t left yet, and they’re even playing pretty good baseball right now. As of this writing, they’re only a game back of Seattle (six back of Houston) and fivethirtyeight gives them better than even chances of making the postseason. But if Oakland wants to have a way to keep the A’s without resorting to cronyism, then on field success needs to become success at the box office.