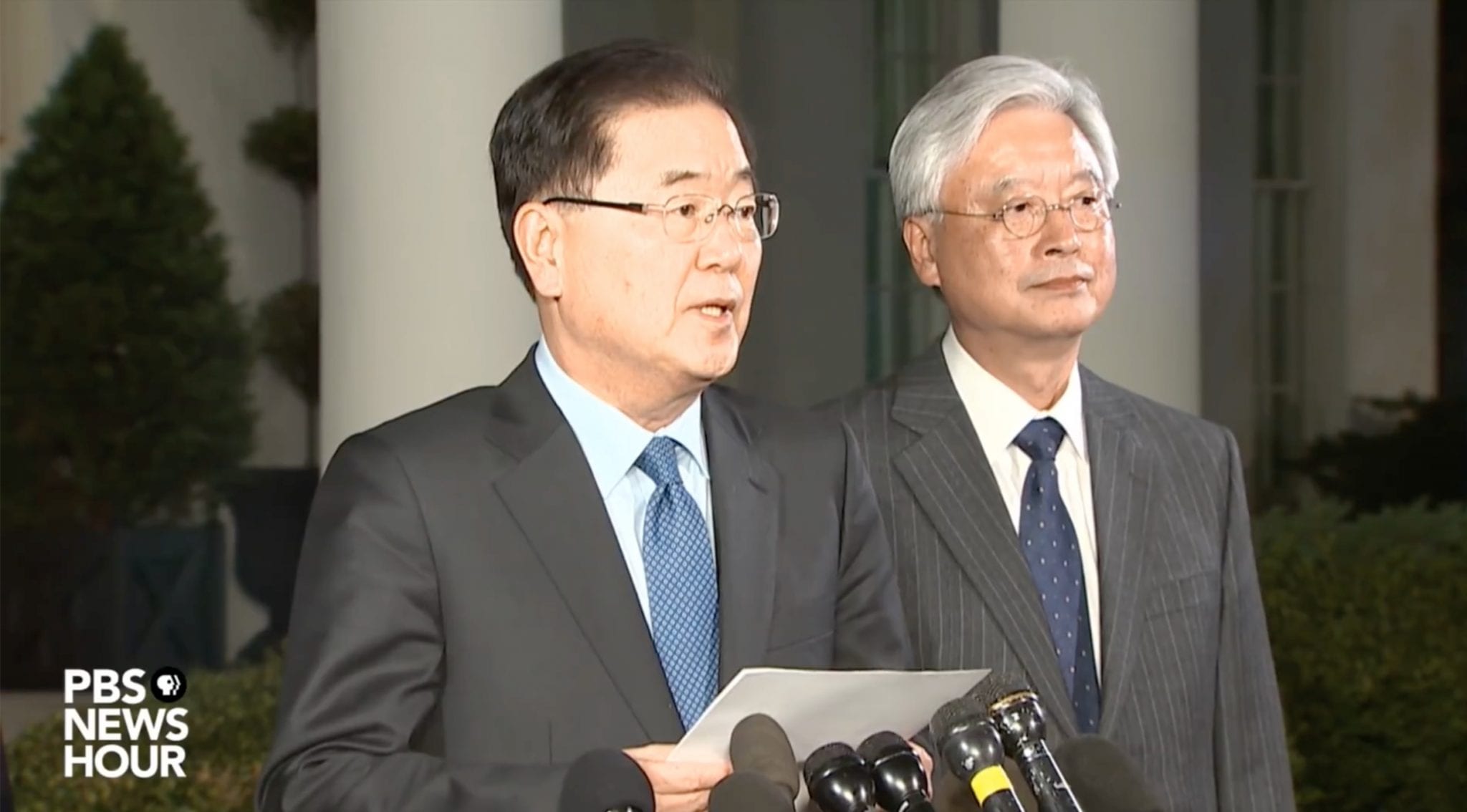 On Thursday, when President Trump accepted North Korean dictator Kim Jong Un’s invitation to discuss the denuclearization of the Korean Peninsula, Secretary of State Rex Tillerson, the South Koreans and the Japanese all claimed to be surprised.

Neither we nor they should have been.

Last December Tillerson begged the North Koreans to negotiate with us. He said, “We’re ready to have the first meeting without precondition. Let’s just meet. We can talk about the weather if you want. We can talk about whether it’s going to be a square table or a round table if that’s what you’re excited about. But can we at least sit down and see each other face-to-face? And then we can begin to lay out a map, a roadmap, of what we might be willing to work towards.”

That was the statement of a desperate man, a man of diplomatic skills equal to those of John Kerry and Barack Obama. Tillerson could not have said what he did without the president’s approval, and probably did so at Trump’s urging. Unconditional talks, supported by sanctions, has been Trump’s strategy for dealing with North Korea.

Last August Ambassador Robert Wood, U.S. representative to a UN disarmament conference, told the group that North Korea may be only months away from being able to hit the United States with nuclear weapons delivered by ballistic missiles.

Since President Trump’s inauguration, North Korea has relentlessly stoked the fires of belligerence, testing nuclear weapons and ICBMs, threatening missile attacks on the United States. The North Koreans have, since the failure of the 1994 Clinton “Agreed Framework,” renounced every treaty they’ve ever made, including the 1953 Armistice that ended the fighting of the Korean War and the Nuclear Non-Proliferation Treaty.

On Thursday, the president met with South Korean officials, including their national security advisor, who delivered a message from Kim Jong Un inviting Trump to a summit at which North Korea’s nuclear disarmament could be discussed. According to the Wall Street Journal, Trump blurted out, “Ok, ok. Tell him I’ll do it.” That sent Trump’s national security team scrambling to arrange the meeting, and to clean up what they quickly realized was the mess the president had created.

When Obama made those statements I and many others criticized him severely for them because the statements portrayed American weakness at a time when strength was required.

As I have written many times, Obama’s nuclear weapons deal with Iran was a product of that weakness that betrayed our vital national security interests.

Preconditions are essential to any major negotiation. They establish the relative strengths of the parties and establish the basis from which the summit’s agenda can be derived.

After Trump accepted Kim’s invitation on Thursday, someone on Trump’s national security team must have blown their top because the White House is trying to back away from Trump’s action.

On Friday, White House spokeswoman Sara Sanders said, “…the president will not have the meeting without seeing concrete steps and concrete actions.” That, of course, is not what the president said. And what steps and actions she referred to are left to the imagination.

Trump’s failure to impose preconditions to any talks could — and should — torpedo the meeting entirely. It is as much a confession of weakness as Obama’s 2008 promise to the Iranians was.

It’s a bad mistake, but not irremediable. Many are saying it evidenced the danger in the president’s impulsiveness. In their eagerness to condemn Trump’s mannerisms they have overlooked the import of Tillerson’s December remarks, which were clearly a greater failure.

The fact that the North Korean dictator sought the meeting means that the serious sanctions that Trump has imposed and is constantly seeking to strengthen are working. Kim’s regime is reportedly bankrupt. Trump should get considerable credit for the sanctions he’s imposed.

Before the meeting, and as soon as possible, Trump needs to define publicly the “concrete steps and actions” the North Koreans must achieve and not just promise.

The biggest problem with Obama’s approach to Iran — and with his dangerous agreement with the ayatollahs — is the fact that nothing since 2008 provides any means of verification of Iran’s actions.

The president should require the North Koreans to mothball their nuclear weapons and missiles, making them inoperable for months at least. Taking their word that they have done so is risible, so verification by U.S. experts, admitted to North Korea’s launch and nuclear test facilities is essential. Anything short of that would be as awful as Obama’s deal with Iran.

Such “mothballing” would take months and preclude further nuclear and ICBM tests during the meetings. The Norks will never agree to those terms, so the “extreme” sanctions we’ve imposed on them should continue and increase to include whatever methods and means we can devise.

The president has said that the “maximum pressure” sanctions on North Korea would continue throughout the talks. He could not have said otherwise without conceding too much in advance of the meeting. His agenda is simple, if impossible to achieve: the total nuclear disarmament of North Korea and an end to its ICBM program.

Faint hope. It’s impossible to achieve because of the severely intrusive inspection plan that would have to be imposed. U.S. inspectors would have to be able to go, without notice, anywhere in North Korea they chose and see whatever they demanded to see. Such clear obeisance to U.S. demands would undermine the Norks’ ideology — “juche” — which requires the worship of Kim and his thoughts. Kim’s infatuation with nuclear weapons shapes his every thought and word.

Kim’s regime is dependent on China for sustenance and military support. Neither the Chinese nor the Iranians can allow Kim to agree to such a verification plan because it would reveal the extent of their cooperation in Kim’s development of nuclear weapons and missiles.

Chinese support for North Korea goes far beyond violating the international sanctions on the Kim regime to sell it oil. For example, China is selling — or giving — the Norks some of the principal assets to ensure the success of their missile program such as the mobile launchers from which the ICBMs can be fired. China doesn’t want that to be revealed publicly.

Iran, as I have written before, is North Korea’s partner in developing nuclear weapons and ICBMs. Each nation is certainly sending teams of experts to the other’s missile tests. Iran’s scientists and engineers, equally certainly, are observing and participating in North Korean nuclear tests.

Every two weeks, a train runs from Pyongyang across China to Tehran and back. It’s not carrying tourists. Iran cannot afford to have the products of its partnership with North Korea revealed because it would sink forever more Obama’s nuclear weapons deal with the ayatollahs.

We cannot assume that anything can be accomplished in a Trump-Kim meeting because history suggests otherwise. Before we, Chamberlain-like, proclaim peace in our time we need to analyze what each side will want and how much they are likely to give to get it.

The fact that the president will meet with Kim, instead of sending a subordinate such as the secretary of state, grants Kim more status and legitimacy than he and his nation deserve. Because of Trump’s impulsive reaction to Kim’s invitation, that is unavoidable.

Kim will try to harangue the president, posing as the reasonable one and attempting to get all of our sanctions relieved. The president will have to cut Kim’s blather off and demand that the one and only topic of the talks be the verifiable de-nuclearization of North Korea. The president cannot grant Kim any other advantage, nor can he agree to what Kim will demand.

Trump cannot hesitate to simply walk away from the meeting as Reagan walked away from the Reykjavik summit with Gorbachev in 1986. He will have to remember what he said repeatedly about the Obama Iran deal: reaching no deal is better than committing us to a bad deal.

Trump’s talks with Kim will fail resoundingly in the attempt to disarm Kim of nuclear weapons and the missiles to deliver them. The only question is whether the president can avoid being talked into a bad deal.