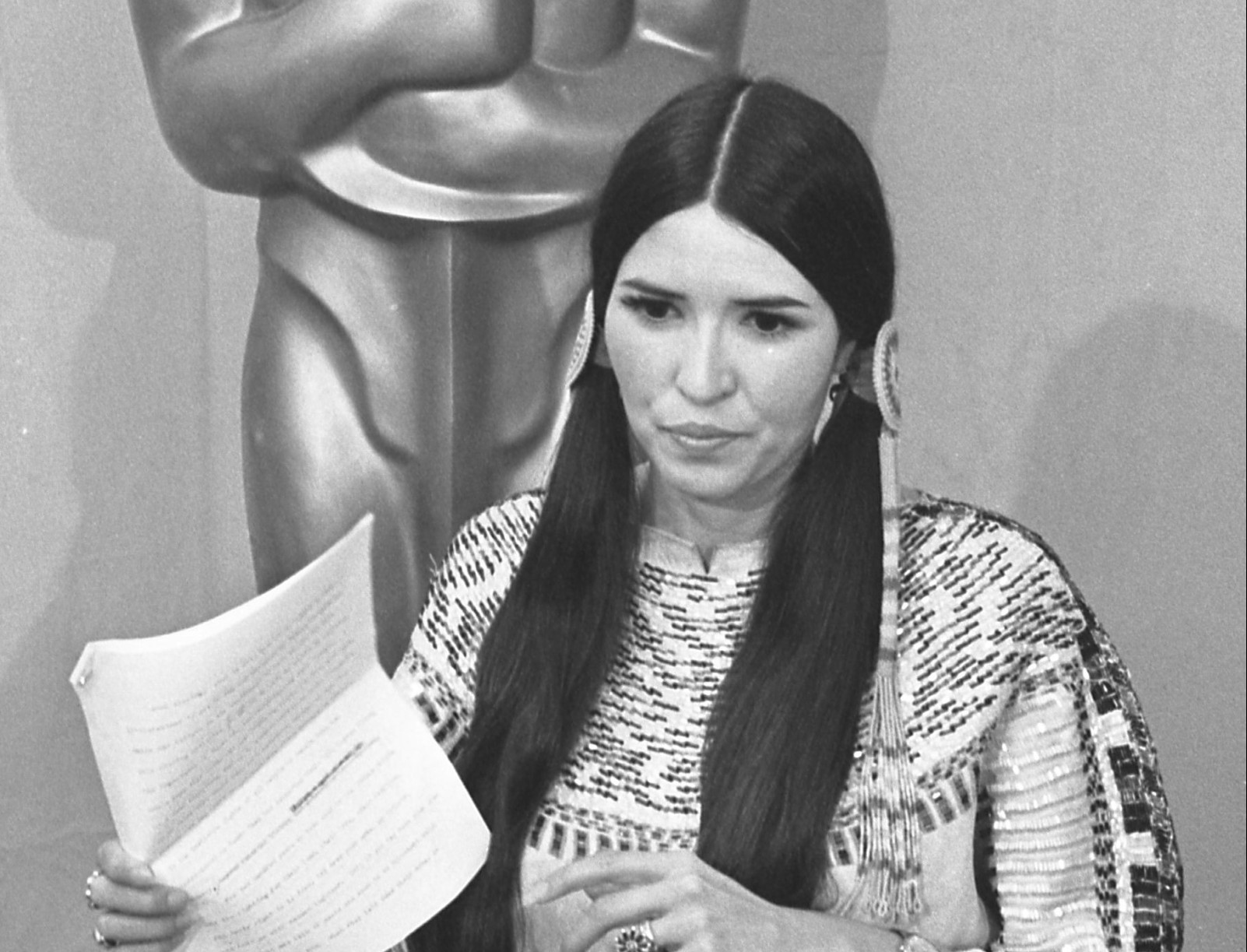 It turns out Sacheen Littlefeather, who famously lectured the Oscars audience in 1973 about injustices done to Native Americans on- and off-screen, traced her lineage not to an Indian reservation but to Mexico by way of Oxnard. She belonged to the same tribe as Elizabeth Warren, Ward Churchill, and Iron Eyes Cody.

She gained fame when the German, French, Dutch, and Irish mix of an actor playing an Italian mafia don sent the pigtailed German, French, Dutch, and Mexican mix of a wannabe actress playing a Native American in a wardrobe more befitting Halloween than the red carpet to accept the Best Actor Oscar in his stead. Littlefeather, who died earlier this month, accepting an acting award feels strangely appropriate nearly a half-century later knowing how effectively she convinced so many.

“My name is Sacheen Littlefeather, I’m Apache, and I’m president of the National Native American Affirmative Image Committee,” she explained in a humble manner. “I’m representing Marlon Brando this evening…. He very regretfully cannot accept this very generous award. And the reasons for this being are the treatment of American Indians today by the film industry” — this elicited a mix of boos and cheers from members of the film industry — “and on television in movie reruns, and also with recent happenings at Wounded Knee.”

“It’s a lie,” one sister told journalist Jacqueline Keeler. “My father was who he was. His family came from Mexico. And my dad was born in Oxnard.”

“It is a fraud,” another sister explained to Keeler. “It’s disgusting to the heritage of the tribal people. And it’s just … insulting to my parents.”

Keeler interviewed Apache officials who found no record of the former Ms. Marie Cruz within their tribe.

The most insulting part to the parents centered around a tale Littlefeather told about an alcoholic father who abused her white mother and their family to such a degree that it led to her upbringing in foster care. The sisters allege that Littlefeather actually expropriated the story of their own teetotaling dad, an impoverished, deaf Mexican passed around to foster families after enduring the abuse of an alcoholic father, and then cruelly turned it on the man who endured all that to add insult to his injury.

She lied about that. She lied about participating in the occupation of Alcatraz Island. She lied about a Navajo giving her the name Sacheen, which her sisters speculate came from the Sasheen Ribbon company that provided the materials for the clothes they made in a 4-H Club during childhood.

Keeler notes in her San Francisco Chronicle article that she found “family records in Mexico going back to 1850. Marriage and baptismal records do not place the Cruz or Ybarra families near White Mountain Apache territory in Arizona — and they weren’t near Yaqui communities in Mexico, either. Instead, the Cruz line goes to a village that is now part of Mexico City. Mexican Catholic baptismal records and U.S. military registration cards from World War I and World War II of the Ybarra men (their grandmother’s brothers) place distant family in Pima/O’odham (formerly Papago) tribal territory in Sonora, Mexico. However, Brian Haley, a scholar of California and Sonoran tribes, told me that these are communities where tribal members would have been a distinct minority.”

Keeler interviewed Apache officials who found no record of the former Ms. Marie Cruz within their tribe.

Weeks before she died, Littlefeather, sponging off the Will Smith slap of Chris Rock, told one more lie.

“John Wayne, backstage, had to be restrained by six men from coming to get me and pull me off the stage,” she had claimed previously, adding to Variety in September that “it was never publicized. He was never admonished by the Academy. It was never published in the press. But the most violent moments took place then and there at the Academy Awards by John Wayne.”

The claim seemed dubious even prior to the current revelations. How could the story of an enraged John Wayne, one of Hollywood’s biggest stars of the 20th century, trying to fight through six men to confront a beautiful, meek American Indian escape publication until Littlefeather told it decades after the fact?

Following her stunt, Littlefeather appeared in several movies; garnered praise from the likes of Coretta Scott King, Cesar Chavez, and Jada Pinkett Smith; advised PBS; and, earlier this year, received an apology from the Academy of Motion Picture Arts and Sciences for her treatment all those years ago. In September, the New Yorker lamented in a sympathetic piece on Littlefeather how “tabloids circulated a false rumor that she wasn’t really Native American.” She parlayed her 15 Minutes more effectively than awards-show crashers Soy Bomb Man and Streaker Robert Opel. The public response, however, largely mirrored the mixed response within Dorothy Chandler Pavilion. She did not become the movie star that her sisters allege — and her previous posing for Playboy and other actions suggest — motivated her all along.

Could she not just feel satisfied that while not becoming a star she did showcase her acting talents on a big stage, if on just one night?

“She lived in a fantasy,” her younger sister told Keeler, “and she died in a fantasy.” In Hollywood, a company town built on fantasy, so many shared in her delusion.

Image: This file has been cropped and is licensed under the Creative Commons Attribution 2.0 Generic license.