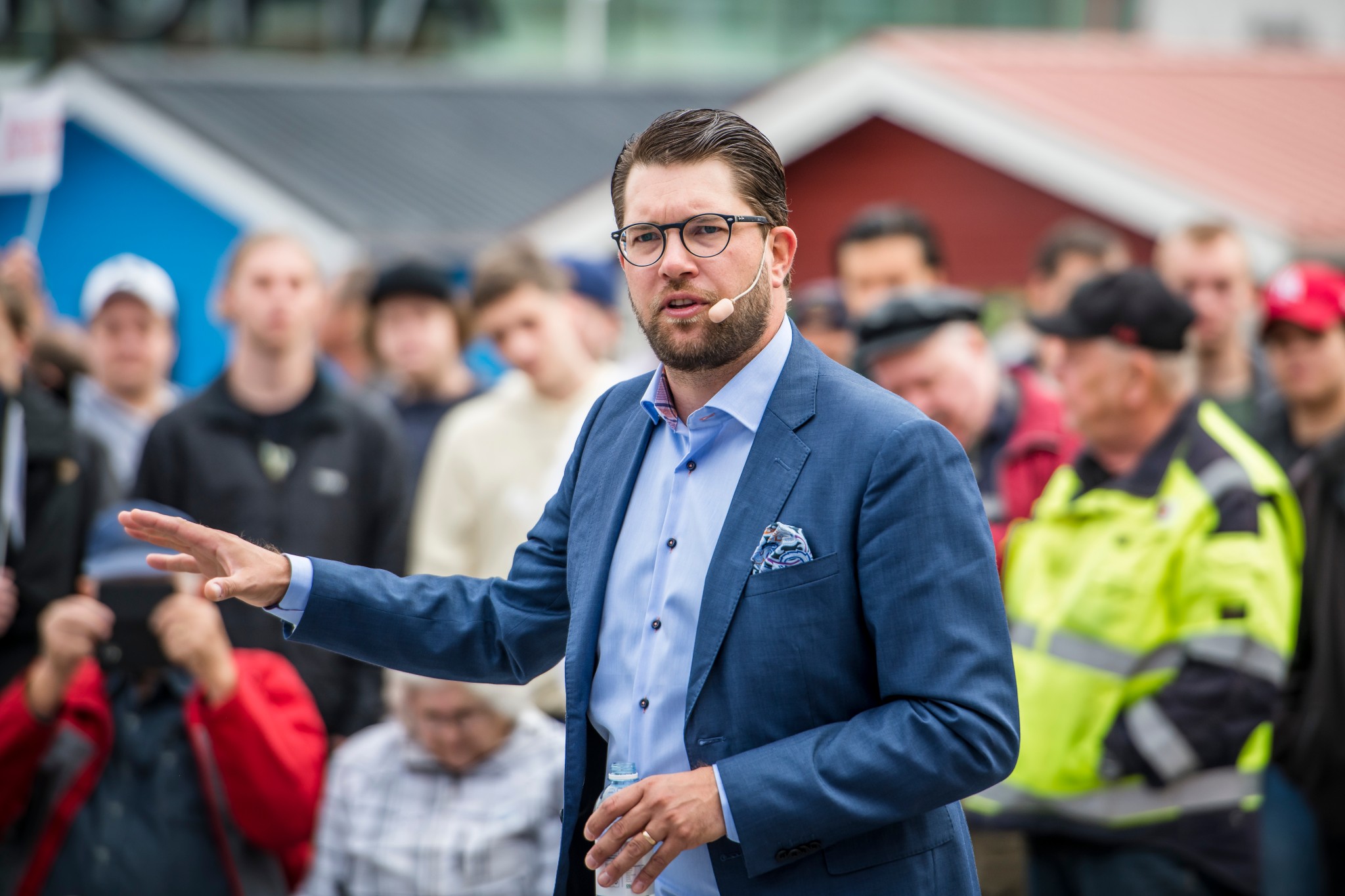 “Sweden Is Becoming Unbearable,” read the headline on Sept. 18. Well, yes, Sweden is becoming unbearable: thanks to the mass influx of Muslims into the country over the last few decades, its rape statistics are the highest in Europe, youth gangs burn cars in the streets of its major cities, and no-go zones — where even police and firefighters fear to tread — are proliferating. But because the headline was in the New York Times, the article wasn’t about the dramatic, destructive way in which Islam is reshaping a once almost ridiculously peaceful country. No, it was about the purportedly horrific fact that the Sweden Democrats (SD) won 20 percent of the vote in the Sept. 11 elections.

The article’s author, Elisabeth Åsbrink, a Swedish novelist and journalist, began by playing the Nazi card, which her country’s establishment media and politicians have been playing against SD for years. Apparently, an SD politician used the words “Helg seger” (“victory weekend”) to describe the party’s latest electoral triumph, and Åsbrink found it necessary to tell Times readers that this sounds awfully like “Hell seger,” which is Swedish for “Sieg Heil.”

Åsbrink went on to explain SD’s big win as a consequence of “the country’s growing inequalities, fostering an obsession with crime and an antipathy to migrants.” Interesting way to put it. Your car got torched? Your daughter got raped? The problem isn’t that an increasingly Islamized Sweden is circling the drain: the problem is that you’re obsessed with crime and hostile toward the “migrants” who are committing it.

Yes, SD has unsavory origins. The fact that so many Swedish voters are nonetheless turning to it only underscores the seriousness of the national crisis that Islam has engendered and the degree to which the established parties have failed to address it. Even as support for SD has grown steadily over the decades — quadrupling, mind you, since 2010 — the parties with seats in the Riksdag (Parliament) have responded not by attending to voter concerns but by demonizing SD in precisely the way that Åsbrink does in her article.

Åsbrink does admit that SD’s victory is historic. But her explanation is bogus:

This monumental rise is thanks to the dramatic changes in Swedish life over the past three decades. Once one of the most economically equal countries in the world, Sweden has seen the privatization of hospitals, schools and care homes, leading to a notable rise in inequality and a sense of profound loss. The idea of Sweden as a land of equal opportunity, safe from the plagues of extreme left or extreme right, is gone. This obscure collective feeling was waiting for a political response — and the Sweden Democrats have been the most successful in providing it. It was better in the good old days, they say, and people believe them. Back to red cottages and apple trees, to law and order, to women being women and men being men.

Yes, there have been “dramatic changes in Swedish life.” They can all be traced to a single cause: the influx into the country of hordes of Muslims who haven’t had anything demanded of them and have had an abundance of things handed to them. When it comes to public services, they’ve been escorted again and again to the front of the line. Even as the natives are burdened by sky-high taxes, the newcomers are entitled to food, clothing, shelter — and more — paid for by those taxes. (READ MORE by Bruce Bawer: A Swedish Pastor Converts to Islam)

And instead of being grateful for all this, all too many of these immigrants teach their children to despise the infidel, and when those children grow old enough, they run wild, robbing and raping the infidel. Åsbrink to the contrary, there’s nothing “obscure” about the Swedish electorate’s reaction to all this. The problem is crystal clear, although Sweden’s corporate media always discuss it elliptically, just as Åsbrink does here.

“Back to red cottages and apple trees, to law and order, to women being women and men being men,” she writes. Well, it’s not the ethnic Swedes who are so preoccupied with “women being women and men being men.” It’s Muslim men. Most Swedes, I think, would be perfectly happy with “the world’s first feminist government,” as it proudly describes itself, if it actually were pro-women. But no, feminism, for this government, is routinely trumped by servility toward Islam; when Sweden sent a government delegation to Iran five years ago, the women wore headscarves and bowed deferentially to their male hosts.

No, the real motive of Swedish voters was sandwiched in the middle of Åsbrink’s sentence: “law and order.” Yes, Åsbrink does eventually acknowledge this — in the very last of her 15 paragraphs:

…we must bear in mind that the majority of the country’s population is not among the Sweden Democrats’ ranks. These people want solutions to real problems — such as a worrying spike in gang and drug-related shootings in several cities — without recourse to ethnic blame games and the vilification of “un-Swedish” culture.

The key words here are “gang and drug-related shootings.” Yes, these and other crimes, committed overwhelmingly by Muslims, are at the root of the electoral earthquake. By leaving this little detail to the end of her piece, Åsbrink was burying the lede. But she was doing even more. Check out her diction. Years of “gang and drug-related shootings” are a “spike.” Being honest about the ethnic and religious identities of the perpetrators is playing “blame games.” As for the scare quotes around “un-Swedish” — well, sorry, but it’s an objective fact that certain practices, such as forced marriage and honor killing, were indeed imported into Sweden from the Islamic world.

Åsbrink isn’t alone in sanitizing the reality of Sweden for politically correct news consumers in the English-speaking world. On the same date that the Times published her whitewash, the Guardian ran a similar piece by Drude Dahlerup, a professor emerita of political science at Stockholm University. In one interesting sentence, Dahlerup wrote that thanks to SD, Swedes have crossed “a linguistic border between decency and populism” by “linking crime and immigrant background,” “asking for a ceiling on the number of immigrants,” and using the term “mass immigration.” She’s correct: until recently, it really was unheard of in Sweden for respectable types to suggest that immigration should be curbed at all or to admit aloud the blatantly obvious fact that most of the country’s violent crime is committed by Muslims.

Like Åsbrink, Dahlerup buried her lede, waiting until the ninth of her 11 paragraphs to mention that law and order was a major issue in this year’s election — and an understandable one, given “the many deadly shootings in the streets related to gang criminality.” Still, Dahlerup closed her piece on a note of hope, pointing out that “79% of Swedes did not cast their vote for the Sweden Democrats” and that Swedish women still care less about street crime than about climate change. “Today,” concluded Dahlerup, “29% of Swedish citizens have an immigrant background, with two parents born outside Sweden. Sweden is, and will stay, a flourishing, multicultural society.” The implication here is that the first fact somehow supports the second. Needless to say, it doesn’t. Yes, Sweden will remain a multicultural society — right up until the not-too-distant moment when that 29 percent becomes 38 percent or 42 percent or 51 percent, and the country is transformed into a sharia society.

There’s one big part of this story that both Åsbrink and Dahlerup entirely omitted from their pieces, obviously because there’s no way to write about it for a place like the New York Times or Guardian — however casuistically or euphemistically — without giving readers a bit too clear a picture of what’s really going on in Sweden. I’m talking about the fact that SD wasn’t the only big winner on Sept. 11: the recently founded Nuance Party, whose aggressively pro-Muslim agenda includes proposals to limit freedom of speech and pass stringent blasphemy laws, also had a good day. It will now have seats on the municipal councils in Landskrona and Botkyrka and is now the largest party in Sweden without a seat in the Riksdag. But that day will come, too, in the fullness of time; and eventually — well — need I spell it out? The writing’s on the wall (although not in the New York Times or Guardian). As the Quran tells us (8:46), “Allah is with those who are patient.”