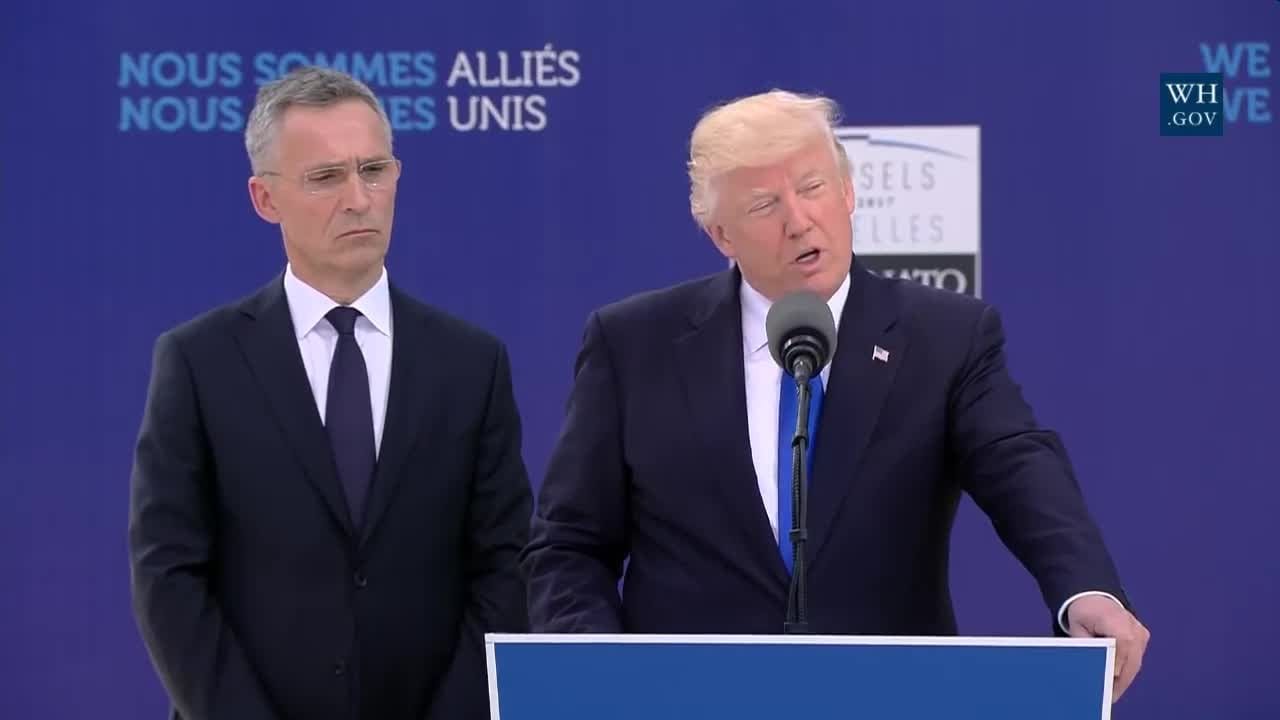 President Trump doesn’t think much of our NATO allies. In the 2016 campaign, he called NATO — among other things — “obsolete” and said that he’d bring a lot of our troops home from NATO nations.

Almost two weeks ago, in preparation for the NATO summit this week, Trump sent the NATO leaders a letter demanding, again, that they increase spending on their own defenses.

Over the past month, the president has also levied tariffs on steel and aluminum imports from the European Nations. The EU membership is almost identical to NATO’s so the effect is much the same. At the G7 summit a few weeks ago, the NATO/EU clique severely criticized Trump for pretty much everything he’s said and done in respect to them.

One thing the president hasn’t done yet is to order the return of our troops. At present, we have — excluding troops in conflict zones such as Afghanistan — about 62,000 troops in Europe, more than half of whom are in Germany, about 39,000 in Japan and 28,000 in South Korea.

Trump is questioning whether we should move some of those forces — perhaps a substantial number — back to the U.S. to save money and, aiming at the NATO nations, thereby forcing the host countries to put more money into defense.

That’s the wrong question. The president should be asking what missions our troops are performing in those nations and which can we afford to turn over to the host countries knowing that they won’t perform them?

I exclude special forces from this calculation for two reasons. First, that they are deployed in far more places, at least eighty countries around the world. Second, that they are performing missions far different from those we assign to troops garrisoned in other nations.

There are four missions that our troops perform in places such as Europe, South Korea, and Japan.

First, deterrence. Aggressor nations — as the Soviet Union was and Russia remains, as are China, North Korea and others — know that if they attack the nations where US troops are stationed, they either automatically — in NATO nations — or in all likelihood will start a war directly with the U.S.

Second, the presence of substantial numbers of U.S. troops is supposed to provide a core around which the host nations build their own forces. That has been done in South Korea and Japan but has not had the desired effect in the NATO nations which, as Trump repeatedly points out, are with too few exceptions, defaulting to us to provide their defense.

Third, our forces man bases in places such as Europe that provide our ability to strike regions outside Europe and to hospitalize critical casualties who are injured in the Middle East and Afghanistan.

Fourth, by stationing substantial troop strength in other nations, the Pentagon is not subjected to the substantial cuts in troop numbers and other assets (such as aircraft and ships) that Congress has made whenever large numbers are brought home.

Let’s take each in turn.

At the end of World War II, President Truman and Secretary of State George C. Marshall agreed with Winston Churchill that European economic recovery was essential and — a difficult decision after two world wars — Germany had to also be rearmed to hold back the Soviet threat. The Marshall Plan became the most generous exercise in history, enabling economic survival and then recovery at great sacrifice to our own economy. The Atlantic Alliance became NATO.

The great fear was that Soviet troops, massed in what was then East Germany, would surge through the Fulda Gap, two low-lying corridors near Frankfurt, and attack Western Europe. Our troop presence prevented that. With the fall of the Soviet Union in 1991, that threat was supposedly ended.

Deterrence was also provided by the NATO treaty which, in Article 5, provides that an attack on one NATO member would be regarded as an attack on all, mandating a very large war. Deterrence, like all strategies, must evolve because the threats and the enemies that make them also evolve.

The NATO Treaty still provides that kind of deterrence to which our troop presence in Europe adds strength. But that doesn’t mean we have to continue having the same troop strength in Europe.

The second mission has failed utterly. Our core military strength in Europe has not served its purpose of providing a base around which other NATO members build their own forces. As a foreseeable result, Germany and France in particular, have been freeloading for decades.

Strangely enough, the foreseeability of that was first voiced in 1961 by then-French President Charles de Gaulle. He said:

It is intolerable for a great State to leave its destiny up to the decisions and actions of another State, however friendly it may be.… [T]he integrated country loses interest in its national defense, since it is not responsible for it.

De Gaulle withdrew French forces from NATO command but sought to keep France’s own forces, including his nuclear “force de frappe,” relatively modern. Every French leader since de Gaulle has let it slip into dependency on U.S. defense just as he predicted.

Germany slipped into that dependence more quickly and deeply than France. After the Soviet Union’s demise, only a few NATO nations have made any effort to maintain their defenses. As a result, the third reason for us to keep large numbers of troops there is largely gone.

But not entirely. The third reason for us to maintain troop strength in Europe — and bases from which they can operate — is even stronger than it was at the end of World War II.

Consider some of the assets we have in NATO nations. For example, Ramstein Air Force Base near Landstuhl, Germany is the headquarters of Third Air Force. It houses air mobility operations that are key to moving troops and aircraft anywhere in the region and beyond. Another example is the Landstuhl Army Hospital, which receives and treats casualties from the Middle East, Africa, and Afghanistan.

Another example is even more valuable and our grip on it more tenuous. Incirlik Air Force Base near Ankara, Turkey provides an enormous ability for us to strike targets all around the Middle East. Turkey’s Erdogan regime has sometimes cut off electric power to the base and has tried to impose restrictions on our operations from it.

Yet another is our Sigonella air base in Italy. As I’ve written before, Sigonella is only forty-five minutes flying time (at Mach 0.7) from Benghazi, Libya. It is the only alternative to Incirlik but is too small to provide Incirlik’s forces with full mission capability to be a real substitute. These bases are keys to our ability to operate in all of those areas.

Similarly, our naval bases in NATO countries are keys to our operations beyond Europe. The naval base in Naples, Italy — and a few others — enable operations all around the Mediterranean Sea.

The missions performed from these bases aren’t going to be performed by the NATO nations if we leave. Even if they did, their national governments cannot be relied on to do what we need done, where we need it done, and at the time we need it done. They simply lack the will or the means to do so. The president would be terribly wrong to withdraw our forces and assets from them in any random fashion.

The fourth reason to maintain troops and assets in Europe is historical. The idea that Congress would cut forces in proportion to those brought back to the U.S. is the weakest reason to keep troops in Europe or anywhere else. But it is still valid because neither the president nor Congress has been willing to seriously address the comparison between needed assets and mission requirements.

We can reduce our troop strength in Europe, especially Germany, without affecting mission requirements. To do so will require a serious analysis of missions and assets that we’ve been unwilling to do.

The president’s other method of stimulating European defense spending — imposing tariffs on European exports — could actually be a better idea.

A couple of weeks ago, I was on Fox Business Network with Neil Cavuto. When I suggested tariffs on German car exports linked to defense spending, he called me “scary.” Neil may be right, and as reluctant as I am to go far beyond my expertise and into the economics of trade, I think the idea isn’t a bad one.

If the president did, as he has threatened, impose a big tariff on European car exports, the nation most affected would be Germany, which exports over twenty percent of its cars to the U.S. France and Italy would also suffer.

If the president imposed the tariffs but said that they would be relieved in proportion to European nations increases in defense expenditures, leading to the NATO-agreed minimum of 2% of GPD, Germany would revolt. The Merkel government might fall. The EU would, as it has already done in response to Trump’s tariffs on steel and aluminum imports from Europe, slap more tariffs on American exports.

Nevertheless, an American tariff on European cars linked to defense spending might be enough of an incentive to bestir Germany, France, and even Italy to invest more in their own defense. The faster they did, the lower the tariffs would become. They’d be down to zero when the nation’s defense spending reached 2% of GDP.

The president may want to threaten troop reductions at the NATO summit this week. If he does, the NATO leaders will call him everything but a gentleman. He may reiterate his threat of tariffs on European cars. Any of those threats can either be empty or too severe if they’re not done right.

The president should remind them all of de Gaulle’s words. If they remain content to rely on us to defend them, they are going to have to understand that their sovereignty depends on us, and that we will extract the large cost from them one way or the other.