The New Horizons spacecraft flawlessly accomplished its designated mission. It explored the dwarf planet Pluto and will be sending back to Earth a treasure trove of data that astronomers are salivating to analyze as it continues to soar out beyond our solar system.

New Horizons has joined four other unmanned U.S. spacecraft hurtling out of our solar system: Pioneer 10, Pioneer 11, Voyager 1 and Voyager 2.

Voyagers 1 and 2, which were launched in the 1970s, are still transmitting data back to Earth. NASA gets about 16 hours of information a day from the Voyagers, but they’re losing fuel and power, and soon will die and go silent.

Pioneer 10 and Pioneer 11 explored Jupiter and Saturn in the 1970s, but died relatively prematurely and stopped sending information back to NASA in 2003 and 1995, respectively. However, both of those spaceships have heliocentric escape velocity, meaning they have the ability to leave the sun’s gravitational pull. So, eventually, they will leave our solar system and continue into the deepest reaches of outer space… in Star Trek speak, “where no man has gone before”.

Eventually, both of the Voyagers and New Horizons will “die” and stop sending information back to NASA. But even then, like the Pioneers, they’ll serve as permanent ambassadors of Earth.

Each of these spacecraft contains some kind of message from Earth, and ominously, charts on how to get here. The two Pioneer missions feature a gold anodized plaque that has drawings of nude humans and some symbols meant to represent the mission and where we are. 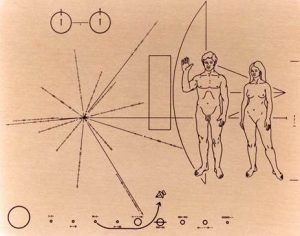 The Voyager spacecraft contain golden records full of sounds, greetings, and pictures that are meant to symbolize mankind and send greetings of peace and friendship to any alien beings who stumble on them.

New Horizons carries a number of objects, including an American flag, the state quarters of Maryland and Florida, the ashes of Pluto discoverer Clyde Tombaugh, and a CD with more than 400,000 names, including former TV host Bill Nye, “The Science Guy,” and Elon Musk, CEO of Tesla Motors and SpaceX.

The simple, consistent message crafted by the missions’ scientists seems to be something along the lines of, “Hello from our brilliant blue marble paradise known as Earth. Here’s where we live. We come in peace to promote intergalactic understanding. Come on down, it’s wonderful here!”

One scientist said these messages are the equivalent of putting a note in a bottle into the surf in Atlantic City in hopes that someone in Europe would get the message. But that analogy is flawed. As inhospitable as some Europeans can be, at least we know who they are, that they are human, and that they are much like us (at least remotely so), even if they speak funny.

Now, I’m certainly not an alarmist or an isolationist, but I don’t think that unbridled scientific zeal or the short-sightedness of astrophysicists should govern our intergalactic immigration policy. After all, the alien invitations carried by these four spaceships hurtling into deepest outer space make several very serious assumptions:

Worse yet, these invitations to potential alien enemies are irrevocable. The message we launched in Pioneer 10, 45 years ago during the Nixon administration, continues to be official Earthling policy (albeit a diplomatic gesture never approved by our Congress, the UN Security Council, or even NATO).

Now, I suppose we could rush to develop and launch another, much faster rocket to intercept and destroy Pioneer 10 and the others to formally withdraw our invitation to space aliens. But, even if we could, such a “Star Wars” strategy might be too little, too late. Those evil aliens may be studying the road map to planet Earth right now — planning their visit, or God forbid, their invasion.

Back in 2010, revered British astrophysicist Stephen Hawking warned it’s extremely risky for us Earthlings to try to communicate with space aliens. He says that while most extraterrestrial life will be microbes, more advanced life forms would likely be “nomads, looking to conquer and colonize.”

Ominously, he opined that a visit by space aliens to Earth would be like that of Columbus arriving in the Americas, “which didn’t turn out very well for the Native Americans.” So, Hawking debunks any notion that visitors from outer space will be friendly, cuddly ET types who will only want to “phone home.” He predicts we will face frightening, predatory creatures whose mission will be to conquer or destroy plant Earth.

Energized by the success of the New Horizons mission to Pluto and Cassini to Saturn, NASA scientists and astronomers will be pushing to move other space exploration missions from the drawing board to the launch pad.

But, on these future missions into deep space, let’s not invite “them” (those yet unidentified extraterrestrials) home for dinner and give them a detailed roadmap on how to get here… at least until we know who the heck they are.