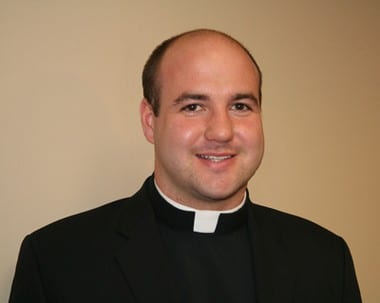 One of the appalling figures at the center of the Monsignor Walter Rossi scandal is Matthew Riedlinger. A former priest nabbed by police during an underage sting operation, he used to live at Rossi’s Atlantic City beach condo. He was even registered to vote there and to this day gets mail at the condo, according to a mailman with whom I spoke last year. I have previously reported the allegations from well-informed sources within the D.C. archdiocese about him and Rossi: that they were once sexual partners, that Rossi pulled strings with the rapist Theodore McCarrick to make his absurdly checkered boyfriend a priest in the diocese of Trenton (where McCarrick’s crony from seminary days, John M. Smith, served as bishop at the time), that Rossi most egregiously introduced Riedlinger to Catholic University students upon whom he preyed, and that Rossi played a role in trying to suppress the Riedlinger scandal after the freshly minted priest got popped for sending over 1,000 obscene texts to a cop posing as a 16-year-old.

“Rossi had an affair with Matthew Riedlinger,” a Church insider told me last year. “Riedlinger was an Ohio seminarian whom Rossi got moved to the diocese of Trenton. Rossi leaned on McCarrick to move his lover there.”

Riedlinger reportedly had been booted from an Ohio seminary for presumed gay misconduct and turned up at Catholic University, where Rossi had his gay-mafia cronies turn him into a priest conveniently assigned to Catholic U. Around 2013, Riedlinger got into trouble for attempting to sext underage children during a sting operation, which had been organized by a Catholic University graduate angry at Riedlinger’s sexual advances upon him. The New Jersey Star-Ledger reported on the scandal: “[Riedlinger] is a priest of the Diocese of Trenton, and while exchanging more than 1,200 text messages over four weeks last year, he thought he was talking to a 16-year-old boy.”

Sources with whom I spoke last year insisted that “Rossi tried to protect him.” Rossi, according to these sources, got Trenton Bishop David O’Connell to try and cover up Riedlinger’s scandal. O’Connell, a former president of Catholic University, “comes out of the gay cesspool at Catholic U and would do whatever Rossi and McCarrick wanted,” one source said.

According to the Star-Ledger, “For more than a year, O’Connell refused to tell parishioners at [Riedlinger’s parish]” why the priest had left. When O’Connell did finally fess up to the reason for Riedlinger’s absence, he shaded the full scandal, failing to note that the wayward priest intended to sext an underage male.

Due to technicalities, New Jersey prosecutors never brought a case against Riedlinger. Before he left the priesthood, Riedlinger tellingly served as an assistant to McCarrick pal John M. Smith.

“Riedlinger used to brag about his sexual relationship with Rossi,” a D.C. source recounted to me last year. The Star-Ledger hints at that relationship by noting an allegation from the sting’s organizers that Riedlinger was introduced to his prey by Rossi. The men said “They met Riedlinger, a Catholic University graduate who was approaching ordination, through the shrine’s rector, Monsignor Walter Rossi.”

So where is Riedlinger these days? He is in northern New Jersey, working as a manager at the Paramus location of Raymour & Flanigan Furniture and Mattress Store. I had heard this tidbit from concerned Catholic Mary Lou Riley, who, with her husband Jim, had met Riedlinger while shopping over a year ago.

It just so happened I was close to Paramus last week, and I asked the Rileys to show me where Riedlinger works. They kindly complied, ferrying me over to his place of business. Unfortunately, he wasn’t working that day, but I caught him on Friday.

“I have been waiting for you, George,” he said ominously to me as I turned a corner at Raymond & Flanigan and found him pecking away at a computer. He stoutly refused to answer any questions. But, as you will see in the accompanying video, his defensive silence broke a few times. (Click here.)

How much, I wondered, did his bosses and colleagues at Raymour & Flanigan know about his past as an ensared pederast-priest?  It turns out not much, given the fearful expressions on their faces as I discussed the charges. I encouraged Riedlinger to call the cops on me. Naturally, he didn’t. A balding nebbish well short of middle age, Riedlinger appeared to perspire as our exchange continued. The last thing he wanted to do was bring in the police. After all, his last encounter with them entailed having to explain to them why he was grooming and propositioning children.