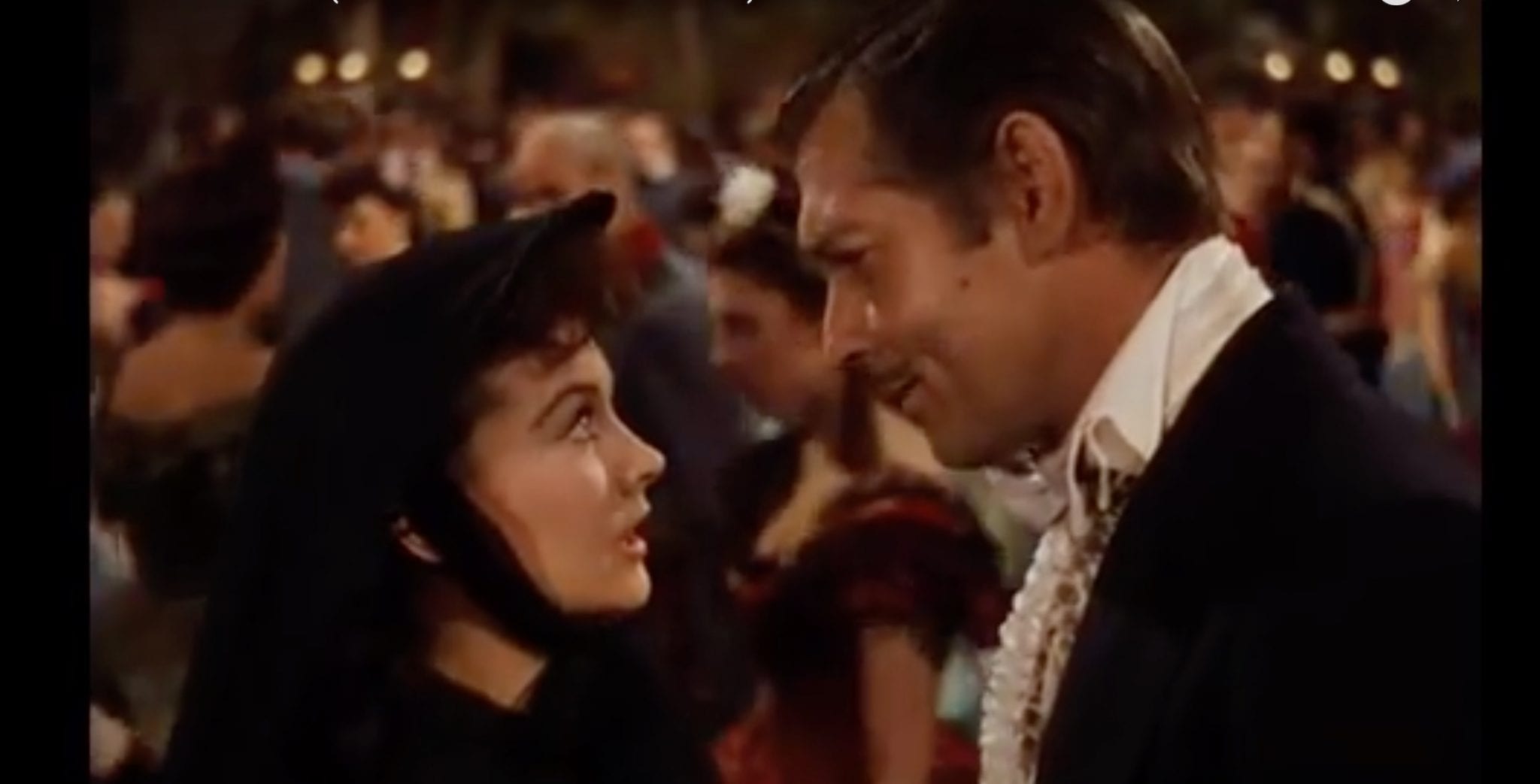 One of my favorite scenes in Gone With the Wind is when Rhett Butler scandalizes Atlanta society by bidding $150 in gold for a dance with Scarlett O’Hara. As she has been recently widowed — Mrs. Charles Hamilton is supposed to be in mourning for her first husband — Scarlett is expected to refuse Rhett’s offer. She accepts it nonetheless, causing Aunt Pittypat to faint in shock. They begin with the Virginia Reel, and later, as they dance the waltz, Scarlett says, “Another dance and my reputation will be lost forever.” To this, Rhett coolly replies, “With enough courage, you can do without a reputation.”

So it has been for conservatives for many years, as their antagonists in the Democrat-controlled media have assailed them with accusations of Wrongthink — racism, sexism, homophobia, etc. — in an effort to smear and discredit anyone who successfully opposes the Left’s agenda. If a conservative has ever made any casual remark that might possibly construed as evidence of “hate,” the Left’s organized smear squads will dig it up and publicize it in an effort to destroy their target. Too often in the past, conservatives have cooperated with the Left in this project, seemingly without recognizing that such cooperation would only encourage further smear attacks. Since the election of President Trump, however, many conservatives have begun to realize they can ignore the Left’s predictable smears, and, indeed, liberals are now discovering to their chagrin that the Right can employ the same tactics.

The left-wing site BuzzFeed pioneered the practice of destroying people — not just people in politics, but any random person with a social-media account — for comments transgressing the narrow limits of progressive “woke” ideology. (BuzzFeed played a particularly prominent role in the infamous 2013 episode of internet shaming known as “Has Justine landed yet?”) That tactic was then embraced by major media organizations, including CNN, which hired BuzzFeed’s Andrew Kaczynski and has evidently assigned him to do his search-and-destroy operations against anyone CNN decides to target as an enemy. Last year, the Washington Post profiled CNN’s internet hit man in an article with the headline, “Said something you’d like to forget? CNN’s Andrew Kaczynski won’t let it go.” The article described Kaczynski as the head of a four-person squad assigned by CNN to “the journalistic equivalent of dumpster diving.… They dig through social-media posts, old audio and video recordings and forgotten speeches, articles and books to find troubling comments uttered or written by the people they’re investigating.” It goes without saying that “the people they’re investigating” are almost exclusively Republican officials or conservative public figures whose destruction CNN considers helpful to advancing the liberal cable network’s anti-Trump agenda.

As this modus operandi was popularized, it became known as “cancel culture,” a term derived from the slang young social-media users who would wage hashtag campaigns to #cancel some internet personality whose behavior was deemed “problematic.” The high-speed flow of information online has a tendency to produce so-called “viral” moments when it seems that everyone with a Twitter account is talking about the same topic, and if you should happen to be the hate-object at the center of one of these digital firestorms, God help you. Having seen friends and colleagues targeted by these Twitter mobs of “social-justice warriors” (SJWs), I know what destructive power they can wield. Thus, I am hesitant to endorse the use of these tactics against anyone, but when “cancel culture” comes boomeranging back to strike its habitual perpetrators … Well, there is at least some delicious irony in this.

Aaron Calvin is a former BuzzFeed writer and a 2013 graduate of Hofstra University who somehow talked himself into a job as a reporter for the Des Moines Register in Iowa. Calvin had been working for the paper about seven months when he was assigned to do a profile feature about Carson King, a young man who “went viral” by waving a sign asking for beer money on an ESPN broadcast of a University of Iowa game. King’s sign not only got him hundreds of dollars in contributions to his online fundraising account; it also made him a national phenomenon. Anheuser Busch brewery offered him a year’s supply of his favorite beer brand, and King declared he’d donate his Venmo proceeds to a children’s hospital. He eventually raised more than $1 million for this worthy cause. When Calvin was assigned to profile King for the Register, it seems he decided to do a BuzzFeed-style hit job on the 23-year-old football fan. Calvin conducted what he described as a “routine background check” on King, which is to say he dug deep down into King’s social-media files to unearth two tasteless tweets from 2012. These were arguably racist jokes that King said he had borrowed from popular cable-TV comedian Daniel Tosh. King profusely apologized for the tweets, which he had posted as a high-school kid and long since forgotten. Beyond those jokes, there was zero evidence to suggest King is a racist. Nevertheless, Anheuser Busch publicly dissociated itself from King, who was thus “canceled.”

And then the internet mob turned on Aaron Calvin.

“Judge not, that ye be not judged,” a certain Nazarene carpenter once warned. “For with what judgment ye judge, ye shall be judged: and with what measure ye mete, it shall be measured to you again.”

Americans have become sick and tired of this journalistic “gotcha” game that our media elite have made a habit of playing. So after Aaron Calvin decided to incinerate Carson King’s reputation over Twitter jokes from 2012, he provoked people to begin researching his own social-media history. It turned out that Calvin had posted quite a few offensive messages on Twitter several years ago and, while there is no reason to believe that Calvin is a racist, a homophobe, or a pedophile pimp (who wants to teach kids to “turn tricks”), he had to be canceled according to the standards he had applied to Carson King. In short order, public pressure forced the Des Moines Register to fire Calvin.

Predictably, however, Aaron Calvin has learned nothing from his experience, whining that his old tweets were “taken out of context” (presumably unlike King’s teenage jokes) and that he was the victim of a “campaign … by right-wing ideologues” (as if Calvin himself is not a left-wing ideologue). Liberals believe they should be exempt from the standards they would impose on others. Rules are for little people, and Our Moral Superiors (as liberals consider themselves) do not consider themselves bound by any rules. Thus do allegedly “objective” journalists act as shameless propagandists for the Democrats, and anyone who complains about the media’s obvious bias is dismissed as a “right-wing ideologue.”

In the Trump era, however, conservatives have begun to muster the kind of courage that Rhett Butler would admire. Trump himself fiercely counterattacks his “fake news” critics, and his example has inspired the president’s supporters to “punch back twice as hard” (to quote Obama’s 2009 deputy chief of staff Jim Messina). Punching back takes many forms, including James O’Keefe’s recent undercover videos exposing bias at CNN. In the wake of the Carson King/Aaron Calvin imbroglio, Silicon Valley investor Balaji S. Srinivasan coined the term “mutually assured cancellation” to describe a deterrent effect, if BuzzFeed-type dirt-diggers were to face effective counterattacks to their smear tactics.

Now, however, journalists are begging Twitter to provide them with a function that would automatically delete old tweets after a certain time limit, thus preventing anyone from suffering the kind of career destruction that took down Aaron Calvin. This prompted pioneering blogger Ed Driscoll to remark:

As long as everyday people were having their lives destroyed via ill-conceived tweets … Twitter’s ozone layer of management were happy to turn a blind eye. In the past couple of years it’s been discovered that leftist journalists and political operatives (not always the same thing) had a penchant for writing racist tweets as a form of identity politics shock theater during their younger days.… Now that the left are no longer guaranteed at having the exclusive right to blow up someone’s life, suddenly — unexpectedly! — Twitter management has the “desire to make tweets more ephemeral.”

All this, you see, because a handful of journalists got a taste of their own destructive medicine. Our Moral Superiors in the media, as they think of themselves, don’t like it when they are forced to play by the rules they impose on others. When liberals find their own careers in jeopardy because of some long-forgotten joke on Twitter, we discover they lack the courage to “do without a reputation.”