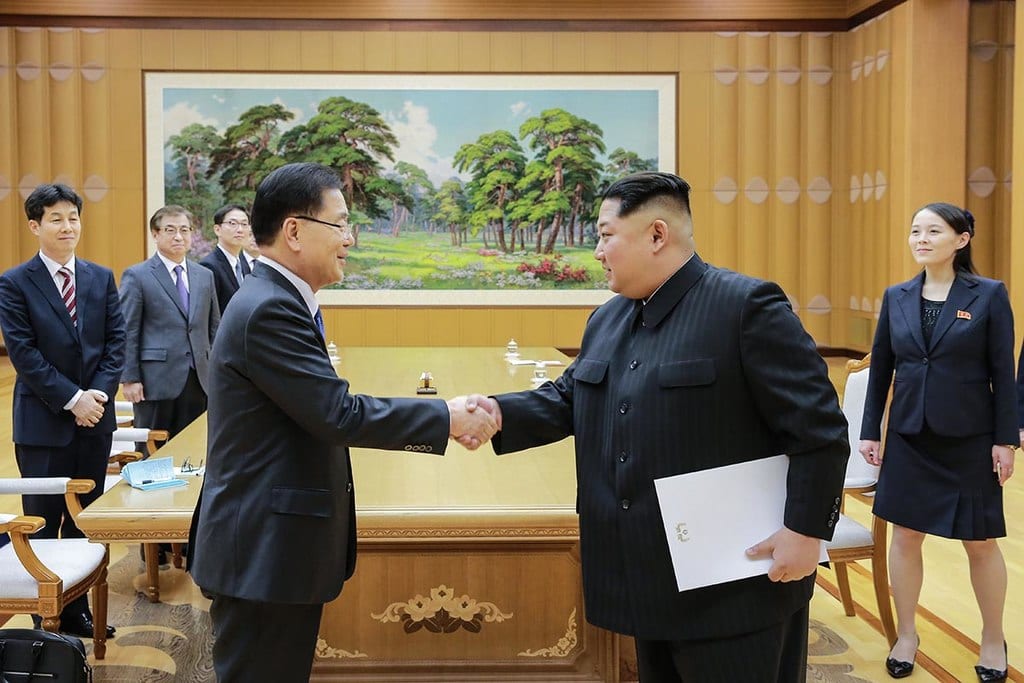 They have met on Twitter, but not nose to nose. They dreamed up nicknames for each other, with President Donald Trump dubbing Kim Jong Un “Rocket Man” and the North Korean strongman calling Trump “a mentally deranged U.S. dotard.”

Their schoolyard taunts have spawned countless comedy opportunities, even though their relationship could not be more serious for the world around them.

As Sen. James Risch, R-Idaho, recently warned at the Munich Security Conference in Germany, if North Korea deploys its nuclear arsenal, “it’s going to be probably one of the worst catastrophic events in the history of our civilization.”

Thursday night, South Korean National Security Advisor Chung Eui-Yong announced that Trump and Kim had agreed to meet. In front of the White House, Chung said that, thanks to Trump’s “maximum-pressure policy” and international efforts, Kim declared his commitment to denuclearize and expressed his eagerness to meet the president “as soon as possible.”

Trump agreed to a meeting by May. On Twitter, he signaled that he would keep the heat on high until an agreement is reached.

What happens when the two wild cards meet? There are reasons to fear that the U.S. gets rolled again, reasons to assume that nothing will come of the whole exercise, and yet slim hope that Pyongyang decides disarmament is in its national interest.

So much hinges on Trump. The president clearly believes that his “maximum-pressure” approach — a mix of harsh economic sanctions, bellicose threats and personal insults — drove Kim to ask for a meeting.

Asked if Trump’s unpredictability factors in this dance, Jonathan Schanzer, senior vice president of the Foundation for the Defense of Democracies, mused, “How would I put this? His unpredictability and his unwavering commitment to maximum pressure has undoubtedly brought us to this place. But that is not the victory. The victory would be denuclearization.”

Bruce Klinger, a former U.S. intelligence officer who is now a senior fellow at the conservative Heritage Foundation, saw Trump’s decision to meet face-to-face with Kim as “impetuous” and “a bit premature.”

Klinger gave voice to the same criticism lobbed at Trump after he announced he would move the U.S. embassy to Jerusalem.

“If the first summit is the highest coin of the realm,” Klinger said, “President Trump seems to have spent it without getting anything in return” — not even the release of three Americans detained in North Korea.

Trump’s highly personalized style has a way of cutting through the restraints of diplomacy. When Trump met Russian President Vladimir Putin at the G-20 meeting in Germany last July, for example, the two got on so famously that a scheduled 30-minute session exceeded two hours and ended with a Syrian ceasefire agreement.

But later that night, the downside of Trump’s freewheeling style became clear. During a dinner for world leaders, Trump wandered over to where Putin was seated and the two spoke with the help of a Russian interpreter. With no American interpreter, there is no U.S. record of what was said.

Klinger noted that when Trump invited Chinese President Xi Jinping to Mar-a-Lago last year, the White House suggested the president would be tough on Xi. Trump no doubt impressed the Chinese president when he told him over chocolate cake that the U.S. had bombed Syrian forces in retaliation for Bashar al Assad’s use of chemical weapons against his own people.

But also, Klinger noted, Trump showed he can be played. Xi gave Trump a “ten-minute lecture” on North Korea and Trump emerged with a different view.

Republicans and Democrats have been aghast at the number of empty positions in the State Department and the fact that Trump has not nominated an ambassador to South Korea. Klinger doesn’t see how Trump expects to prepare for a summit in less than two months with a hollowed-out foreign policy shop.

Schanzer is less concerned. He noted that the Obama administration had very sharp operatives working on the Iran nuclear deal, “but they folded in the face of Iranian negotiators.”

Schanzer also is heartened by the administration’s focus on North Korea, which “has been the No. 1 issue for the National Security Council.” When you add staff from the Pentagon and intelligence agencies, he said, “it’s not as if we don’t have manpower on this issue.”

After more than three decades of U.S. presidents trying but failing to tame Pyongyang, Trump at least benefits from the effects of international isolation and trade sanctions that have deprived North Korea of oil imports and other resources.

At the same time, Sanders said, “The United States has made zero concessions.”

While past international agreements have failed, Klinger said that doesn’t mean that this effort absolutely must fail. The key is to not fall into two familiar traps. “We accepted very vaguely worded agreements in order to reach an agreement,” Klinger said, and, “we had insufficient verification.”