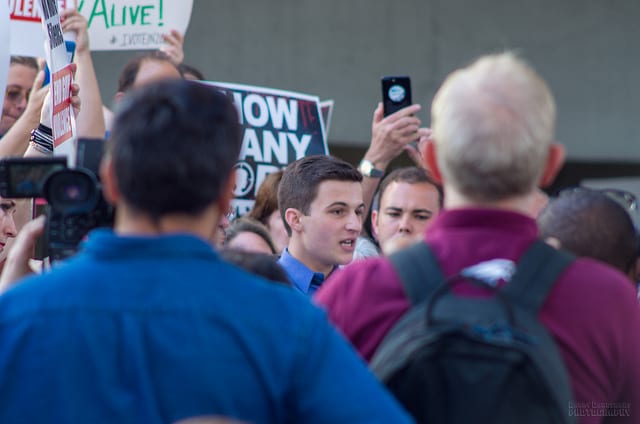 Just last Saturday, members of the media gathered for their version of the Oscars at the White House Correspondents’ Dinner to celebrate all the wonderful journalism that they truly believe they are doing.

The only thing more unseemly than watching journalists act like giddy school girl fans around every Democrat they run into is their new habit of celebrating every unfortunate thought that issues forth from one of the brains of the anti-gun Parkland activist kids.

Let’s be clear here: most adolescent boys are barely functioning chimps. I was an idiot when I was seventeen. Thankfully for all concerned, there weren’t any adults around me who pretended to be interested in what I thought.

These Parkland kids, however, are being used as human shield virtue proxies by the mainstream media. Every utterance from one of the little marchers is swooned over by the press as if Jesus, Gandhi, and Plato had become one and crafted each syllable.

At first I truly believed that these kids were just being used as puppets and were having their lines fed to them by activist adults. Now I sincerely hope that’s not the case because almost everything one of them says is really, really dumb. True, it is possible that their adult handlers are paste-eating morons too, but we may as well end the human experiment now if they’re this stupid:

The NRA has evolved into such a hilarious parody of itself. pic.twitter.com/6Pw6NTQAe6

Since he tweeted this on Saturday, almost every mainstream media outlet seized on Kasky’s less-than-insightful comment as if it were news. They ran stories celebrating the cleverness of the lad and never getting around to the truth of the matter, which is that this is a Secret Service call and has nothing to do with the NRA.

This went on for almost two full days before some rather weak corrections like the one below were issued:

AP has deleted a tweet that incorrectly said the NRA had banned guns during Trump and Pence speeches at its annual meeting. The ban was put in place by the Secret Service. A corrected tweet is coming.

How on Earth did one of the largest news organizations get it so wrong?

Simple, they wanted to.

As of late Monday, ABC News is running an article that gets the facts right but is still promoting it with this disingenuous tweet:

Politico has an article that sticks to the narrative then finally gets around to a quick quote that provides the facts at the end of the piece. It’s at the end because it was (by their admission) added after the original, completely untrue post ran.

The examples go on and on but I think you’re getting the gist now.

The MSM are so devoted to pushing a progressive agenda that almost every major outlet in the country ran with some snark from a testosterone-addled 17-year-old kid as news. Surely someone at ABC or Politico has dealt with Secret Service security protocol for the President or Vice President, right.

Facts aren’t really important in the postmodern social media news world. Most people just read the tweets or the headlines. If you’ve made it this far into this relatively short post you are probably a true 1%-er.

Hang onto this story for the next time someone from the mainstream media insists that they don’t pick sides.