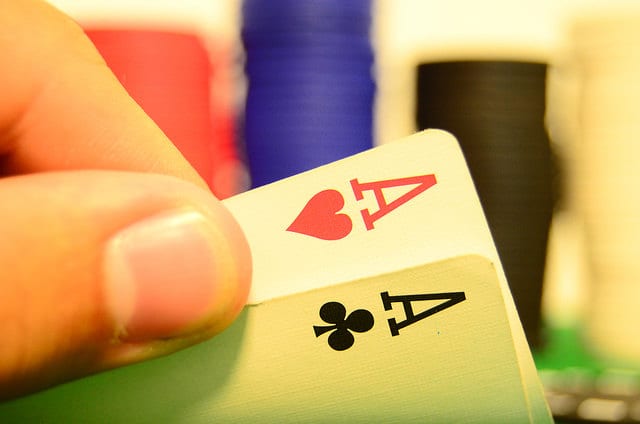 Heads-up play is poker at its most basic, yet it’s also among the trickiest aspects of the game. If you’re predictable when facing only one opponent, you’re going to get beat. (And when I mean only one opponent, I mean both heads-up matches and situations at a full table when you constantly find yourself up against the same foe.)

You’ll have to mix it up, pulling off check-raise bluffs and checking in position with good hands to induce bluffs. You’ll need to play the same exact hand several different ways so your opponent can’t get a good read on you.

Let’s take a look at a sample hand from no-limit Texas Hold’em and different ways you can mix up your play.

You have As-Ks, raised the pot, and your foe called and you take the flop heads up. The flop is Kd-6c-2h. You flopped top pair with top kicker and there are no straight or flush draws to worry about. Fantastic, huh?

You could be beat and you could get outdrawn, but the likelihood of each is pretty slim, so that fact gives you plenty of options for how you choose to play the hand. So how will you play it? Let’s look at some options.

There’s numerous more ways this hand could play out, but that’s a list of some of the basics, and I didn’t actually talk about the pot size. That variable alone creates many more dynamics on how a hand like this can go.

At various times during the game you should play a hand like this in ALL of these ways. Why? Playing like this makes you very unpredictable and will greatly confuse your opponent. If your opponent held a hand like 8-8 in this example he might have folded on the turn if you bet the flop and the turn, but if you check the flop, he might call the turn and the river, earning you more profits as he looks up your bets because he thinks you might be trying to steal the pot.

The disadvantages of using a tactic like checking the flop to induce calls or bluffs on later streets include the possibility of getting outdrawn or missing out on bets that would have been called on earlier streets, but not on later ones, such as when a player is drawing at a straight or flush. That’s why you don’t want to get cute when the flop is dangerous, giving your opponent a free card. But if the flop looks like the one in the example above, don’t be afraid to mix up your play.