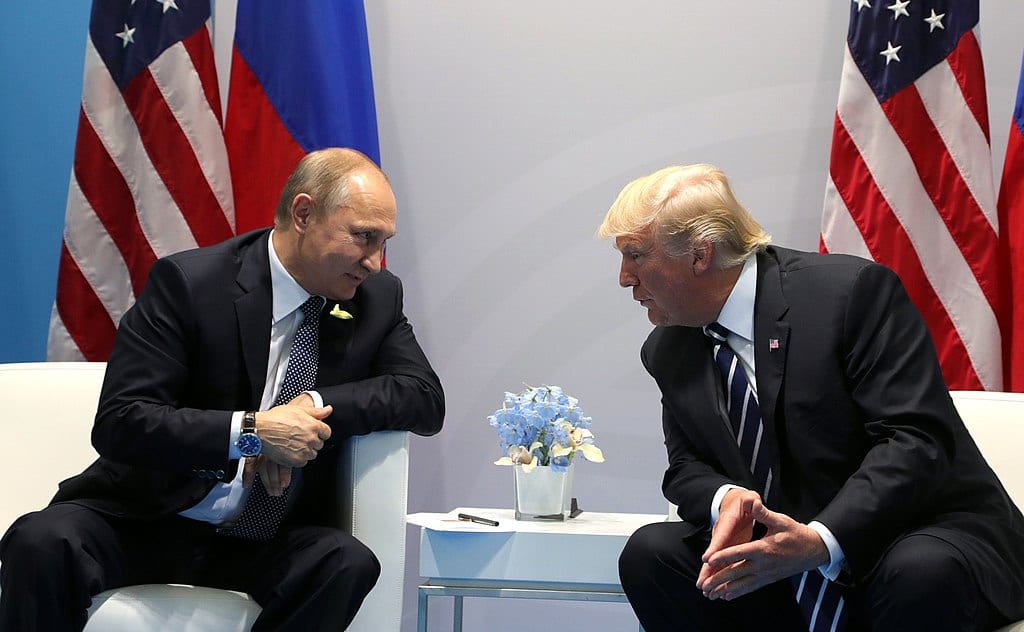 A door creaks — metaphorically, of course — and a metaphorical breeze slinks into the room.

American foreign policy is beginning to change; possibly renewing itself after an unprepossessing time of small-beer actions interspersed with grand apologies for past actions.

As always in the World of Donald Trump, grand predictions dangle dangerously, awaiting refutation. That’s not to say there isn’t something soul-satisfying about the U.S. government’s announced expulsion of Russian “diplomats” — a category often found to overlap the category of intelligence agent, or just plain spy; meaning, in essence, the category of foreigner who wishes America no good. And maybe the White House means what it says, with or without advice from the estimable John Bolton, the incoming national security advisor.

That Germany, Poland, Italy, Denmark, and France have joined the U.S., and previously Britain, in throwing out their own components of Russian bum, is great news, wonderful news, due to the symmetry of aims and actions it represents. And, oh, do the Russkies, as we used to call them in more clear-eyed times, have it coming to them.

The spy evictions announced Monday are meant to punish Russia, and send a warning as to the bad and dangerous behavior that has become state policy in Moscow. As practically everyone knows, the Russians poisoned one of their former spies, and the man’s daughter, in England. The Russians deny their culpability; but, then, they deny everything prejudicial to their goal of restoring to Russia a measure of greatness and pride.

Normal people would suppose long-distance murder attempts — for whom no one else could possibly be blamed but the Russian secret service, controlled by Putin — represents something other than national greatness. But the Russkies, no longer a power of the first rate, will take what they can get.

And to think! — the U.S. got in on the action; not just got in on it — helped to lead it. The diplomatic expulsions, coupled with Bolton’s ascent to influence within the administration, not necessarily will but certainly might influence expectations as to American behavior in the face of serious challenge.

It is a sad fact of history and human nature — yet a fact all the same — that the expectations of outsiders depend on what they think they have reason to expect; namely, the kind of behavior they’ve seen before. Weak behavior in the past points to weak behavior in the present. So with strong behavior: the more so as underestimating the strong can be infinitely more dangerous than low-rating the weak.

Vietnam damaged U.S. self-respect so seriously that Jimmy Carter and Leonid Brezhnev never negotiated at eye-level. Carter sold himself as a peace-seeker, seldom to be feared: until the Soviet invasion of Afghanistan peeled the scales from his eyes. And he saw. Just as Ronald Reagan had seen all along: knowing the very worst way to deal with the Soviet enemy was from perceived weakness. Accordingly, he signaled the Soviets, in word and deed, that the United States was not to be trifled with. And it wasn’t.

The disappearance of the USSR and, for a time, the ideological pullback of China left the U.S. free to concentrate on fighting terrorism. It should never have left us with the lassitude we mistake for generosity and kindness.

One major reality of life is un-dodgeable by the kindest and lithest of us. It is that the strong and the powerful, unwilling to brook nonsense, far less existential threats, normally earn exemption from the plots of those who plant fake election news and try to turn someone else’s citizens against each other.

An ancient rule of thumb has it that nations happy to prove their strength seldom need to prove it. They get believed. They excite respect, and some measure of apprehension — as perhaps a secret policeman-turned-national leader has more reason than most to acknowledge.