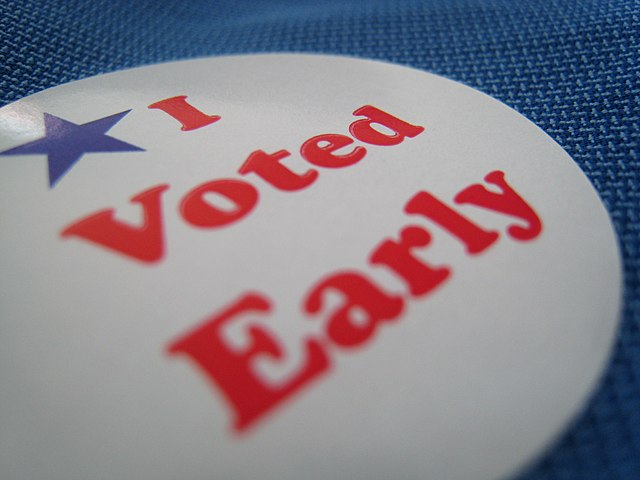 The Democrats typically lead Republicans in early voting during midterm and presidential election cycles. In 2016 the Democratic lead in early voting was such that it inspired major news outlets, AP for example, to run articles with titles like “Early voting: More good signs for Clinton in key states.” Among the states in which early voting portended a victory for Hillary, according to AP, were Florida and North Carolina. The story went on to quote her spokesperson as follows: “The Clinton campaign describes both North Carolina and Florida as ‘checkmate’ states.” Trump won both of course.

Oddly, most of the major media have been reluctant to report early voting trends in the current cycle. AP has reported on it only when there are vague complaints about alleged voting machine problems. The Washington Post, which was just as anxious as AP to run stories about early voting in 2016, now tells its readers that these ballots have no significance: “Who’s voting early? Mostly people who would have voted anyway.” What has caused such a reversal in media attitudes? To paraphrase Dana Carvey’s SNL character, Enid Strict: Could it be the surge in early voting by Republicans?

And, make no mistake, there is a GOP surge that has rendered this year’s early voting pattern unique. Interestingly, the only major network that has covered this story in detail is by no means remarkable for its Republican-friendly reporting. On Monday NBC reported, “The data suggests enthusiasm among early GOP voters that could put a dent in Democratic hopes for a ‘blue wave’ in the midterms.” Early GOP voters were leading Democrats by large margins in Arizona, Florida, Georgia, Indiana, Montana, Tennessee, and Texas. And that was not an anomaly. By Thursday NBC reported:

So, there are two unusual phenomena associated with this year’s early voting — the overall participation has been far higher than is usually the case in a midterm election, and Republican ballots are materializing in significantly higher numbers. At this point in the 2016 election, early Democratic ballots led early GOP ballots by 45 percent to 38 percent. This cycle, the Republican percentage has increased by 7 while the Democratic percentage has dropped by 5. Does that mean the oft-predicted blue wave was BS? Who knows? But it’s a sure bet the legacy “news” media won’t tell you.