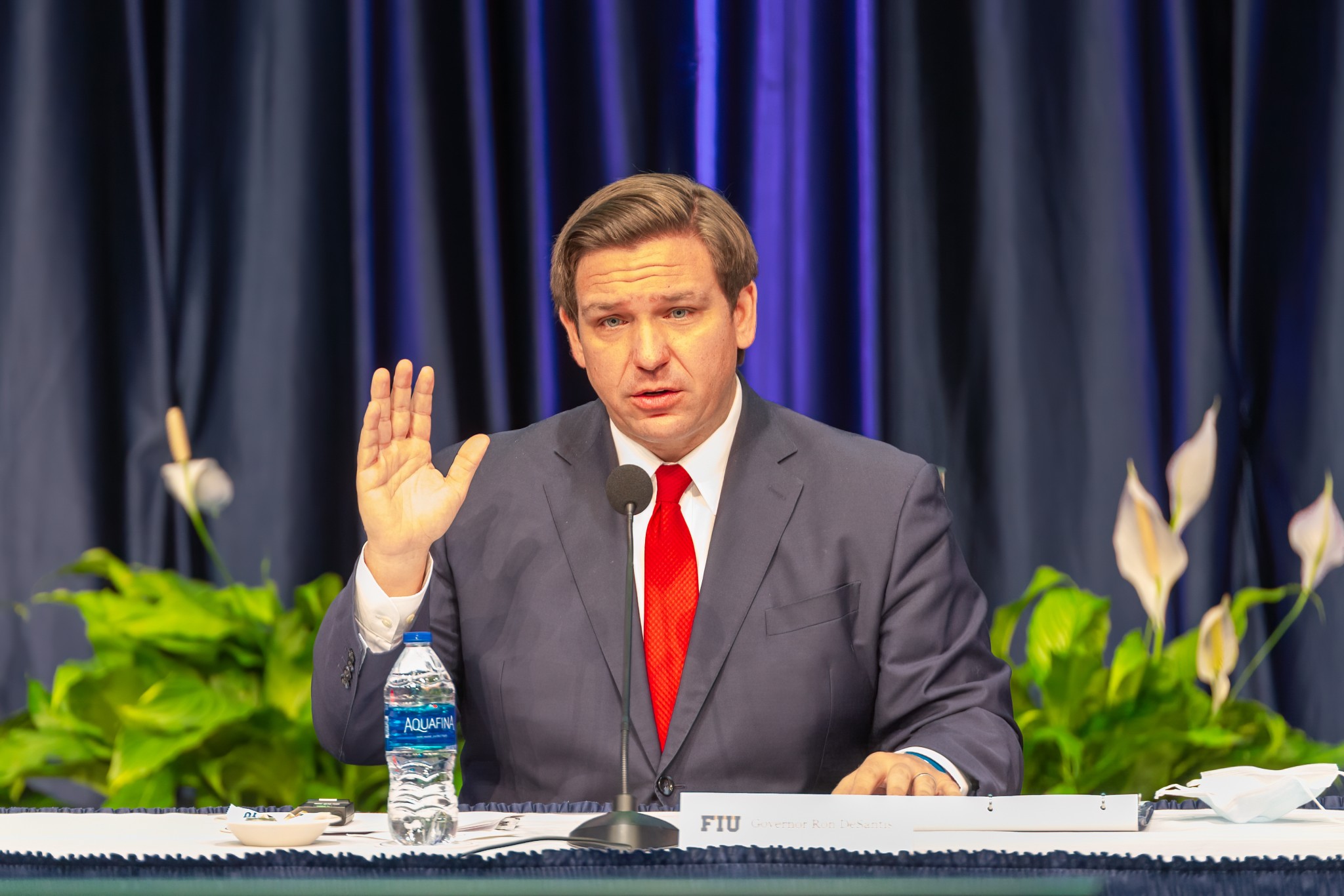 Florida Gov. Ron DeSantis will run for president in 2024, or at least that thought is depriving Democratic strategists of sleep. And one does not need years of expertise to know why. At first glance, it becomes self-evident: the governor manages himself in a compelling and effective way.

He evokes the attention-capturing Trumpian persona that has allowed him to bolster his name recognition and become the anti-Biden nationally. But unlike the former president, he tries hard to appear assertive, not arrogant, industrious, not overambitious, and vigilant, not impetuous. Hence, he is a threat to the current establishment and all of its corporate backers. So logically, since actual assassination is unplausible, the next step is assassinating his character. And it’s clear that such a process has already begun.

This week, MSNBC opinion columnist Dean Obeidallah published a piece titled “Why Ron DeSantis is more dangerous than Trump.” The attack began by stating that “[t]here should be a special place in hell — or potentially in prison — for politicians who put their political goals ahead of the health and safety of our children.” After accusing the governor of putting pure self-interest over the lives of innocent kids, Obeidallah concluded that although “Donald Trump is a clear and present danger to our nation,” DeSantis is even more so.

The article references a Florida Politics poll which shows that 62 percent of the Sunshine State’s voters support mask mandates for schools and health experts who advocate for masking in schools. This leads the author to conclude that “DeSantis, like Trump, is focused only on the GOP base,” even if that means it will cause children to “get sick — or worse.” It makes DeSantis sound like a tyrant, right? That’s the goal.

Eliciting emotion is the goal, but dare mention that the fatality rate for children under the age of 16 remains under 0.003 percent as compared to “0.006 percent during the severe flu epidemic of 2017-2018,” as Eugene M. Chudnovsky did for The Hill, and risk getting labeled “anti-science.”

There is nothing inherently wrong with criticizing DeSantis’ policy on masks; if anything, that should be expected in a free country. Yet, what catalyzes news stories today is not a particular desire to uncover the truth or challenge dogmas. The goal is political, and the author exposed this himself.

The MSNBC columnist argued that what makes DeSantis dangerous to the nation — which translates in mainstream media lingo as “bad for the Democratic Party” — is that the governor knows how to wield “actual government power.” He continues by pointing out that “while Trump reportedly was able to get into the University of Pennsylvania’s Wharton School of Business only with the help of a family member, DeSantis graduated from Yale University and Harvard Law with honors. And DeSantis, who served in the Navy as a JAG officer, at 42 is far younger than the 75-year-old Trump.”

Can he make it any more obvious? Yes, and that is why he follows that by explicitly stating that he thinks “DeSantis is the future of the GOP.” Hence, revealing the true intentions behind the critique. It is dishonest, fear-mongering, and partisan. In other words, it is what they say they hate, but also what they do every day.

What is also fascinating is how contradictory the DeSantis obsession is when assessed with liberal standards. The vaccination rate in Florida at the moment is above 60 percent. And the Mayo Clinic’s U.S. COVID-19 vaccine tracker shows that this makes Florida the most vaccinated state among those won by the former president in the 2020 election. And not only that, but Florida outperforms many Democratic-led states too. Additionally, it makes sense to consider that the state has the highest percentage of senior citizens and the third-most immigrants.

To this day, New York, Massachusetts, and New Jersey remain the states with the highest coronavirus death rates, and more than twenty slots behind those states lie Florida and Texas. Has it been the best week for Florida and Texas? Not at all, but the hyper-focus on them from the very beginning has become exhaustive. Spikes elsewhere seem to go unnoticed, but in crucial states for Republicans? They are covered as if they were genocide, and all nuance is taken off the table. For instance, in March, the currently hospitalized state comparison showed that Florida, with close to 21 million residents, had 3,307 hospitalized patients. New York, with close to 19 million residents, had 4,789 hospitalized patients. And when comparing Texas and California, the former had 4,721, and the latter had 4,291. But guess which states attained harsh criticism and which ones were praised even when controversies were ubiquitous? We all remember.

Last year, the Washington Post and several left-wing outlets couldn’t stop talking about the fact that people were going to the beach. But that obsession made them ignore that despite Florida’s freedom-oriented approach to governance, numbers were better in Florida than they were in lock-downed California. And when it came to holding Gov. Andrew Cuomo responsible, the New York Times tried its best to editorialize the truth to make Florida look like hell and New York like heaven. And when it came to reopening schools, the #WeBelieveInScience crowd ignored the pediatricians who went on their channels to say that masks would not be effective for children in elementary school, and stated that they would send their own kids back without hesitation. Months later, that same crowd led by MSNBC’s Joy Reid is shrieking about Republican governors “killing children.” Has science done a 360 or is this another case of immeasurable hypocrisy?

Population density, age disparities, policy, and public opinion are just some factors that need to be accounted for when rationalizing how to cover COVID-19. Most of us might not be epidemiologists, but we can all spot ill-intention. And the spotlight given to DeSantis stems from political animosity, not reasonable disagreement.