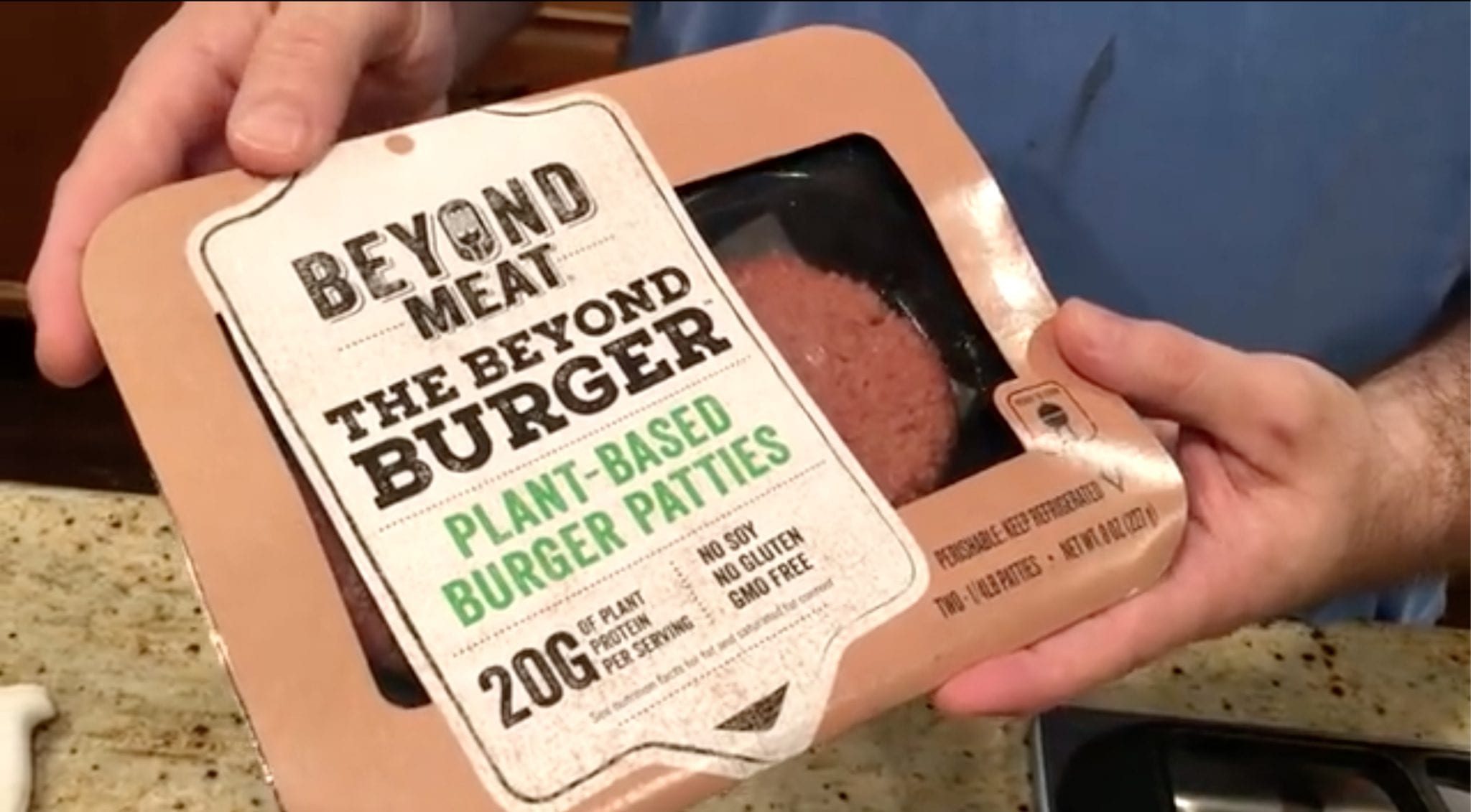 Is it better to have been a cow who, after spending a few years in a pasture or a feedlot, gets sent to a slaughterhouse — or to have never been a cow at all?

Animal-rights activists and ethicists might want to start pondering that ethereal question now that a couple of California-based companies have developed plant-based meat substitutes that taste remarkably similar to ground beef.

One of those firms, Beyond Meat, announced that it’s ready to offer a public stock offering. The El Segundo company’s products are available at thousands of U.S. grocery stores and restaurants. Redwood City’s Impossible Foods burger already is on the menu at Red Robin and other places, while Burger King test-markets the Impossible Whopper in St. Louis.

If they catch on, there’s a possibility that the demand for cattle will ultimately fall. And that’s before we ponder the future of lab-grown meat. Here’s one sign the threat is serious: Some ranchers are lobbying for new labeling laws and other restrictions on plant-based and lab-grown foods. (The Guardian quotes one farm-industry official saying, “If farmers and ranchers think we can mock and dismiss these products as a passing fad, we’re kidding ourselves.”)

There are so many thought-provoking lessons to be drawn from this developing industry, beyond the above-mentioned one about the lives and welfare of the lowly cow. The main one centers on the way that the free market resolves problems — real or perceived — through abundance and choice rather than regulation and edicts.

Environmentalists and the professional nannies have long been decrying our reliance on meat in our diets. “Meat consumption in the United States — and across much of the Western world — has reached a level that is unsustainable, both for our planet and for our health,” wrote Laura Wellesley, a researcher on climate change and food security, in a 2016 Washington Post column. The headline asks the usual, infuriating question: “Should the government step in?”

That argument is jaw-dropping. The entire history of human existence has been defined by a mad search for calories. Hunger, poverty, and short lifespans are the norm, not the exception. I feel a combination of optimism and dread about the state of humanity when the biggest “food security” problem is that delicious, life-sustaining food is too inexpensive and readily available.

Writing on a full stomach, I suppose, Wellesley complains that global consumption of red meat is expected to rise by 76 percent by 2050 because of growing demand in “emerging economies.” She praises China’s government for introducing a new set of dietary guidelines pushing its citizens to cut its meat-consumption levels in half.

It’s apparently a bad thing that people living in poor nations are now eager to enjoy what Americans and other westerners have long taken for granted: access to a diverse diet of sumptuous meat-based offerings rather than subsistence on rice and vegetables. Of course, demand for beef is growing in developing countries that have long been impoverished, which should be celebrated as a great advancement in global health.

The meat nannies worry about the impact of livestock on global greenhouse emissions. They bemoan the supposed health effects — diabetes, obesity, heart disease — of eating too much processed meat. Whatever one’s views of the climate-change issue, it’s clear that market changes are going to do far more to address any potential problem than punitive regulations that will drive up the cost of food and leave much of the world hungry.

Giving people fewer dietary choices is not going to improve public health. I’ve been at my leanest and healthiest after embracing a low-carb, meat-based diet. It’s not exactly news that poorer people tend to be the most susceptible to diabetes and other diseases — and it’s probably not because of the intake of too much beef, chicken and pork.

Nevertheless, many people have the legitimate desire (health, animal welfare concerns, and religious observance) to cut back on their red-meat consumption. I’m not a dietician, but the more quality, affordable food choices, the better. Toward that end, the new meatless meat products are an amazing creation, no matter how you cut it or slice it.

I recently tried the Beyond Famous Star at Carl’s Jr. (Hardees, for those not living in the West) and — covered in cheese and condiments, and sitting within a bun — it tasted surprisingly close, but not indistinguishable, from 100 percent beef. Imitating a fast-food beef patty isn’t the highest bar, but this is a far cry from veggie patties. The manager told me some customers had returned the sandwiches, thinking the restaurant had mistakenly given them beef burgers. I also grilled Beyond Sausage, and it was nearly as satisfying as my usual bratwurst.

The next day I headed to Red Robin, which was out of the Impossible Burger given strong demand. I headed to a local burger joint (along with others who were turned away). Impossible uses something known as heme, described by the company as “an essential molecule found in every living plant and animal.” These burgers use a yeast-based version. It was a dead ringer for a 100-percent beef burger.

The Food and Drug Administration has found that heme is safe to eat, but is dragging out the process for approving heme as a food coloring. Likewise, state efforts to demand labeling rules highlight the usual government impediments. These burgers are marketed specifically to people who want a meat alternative. No one is going to get fooled into buying them given they cost more than the cattle-based product. Do we really need the feds to remind us that processed cheese is a “cheese product” or that vegan burgers aren’t flesh meats?

Some vegans believe that people should be eating vegetables rather than imitations of anything. Others complain that the fast-food sandwiches are unlikely to be totally vegan because of the buns, condiments and other additions. Fine, then don’t buy them. Even some conservatives are leery because, well, real men apparently ought to eat real meat.

Despite the picayune complaints and government barriers, the meatless meats are the latest example of how capitalism can address concerns about animal welfare, healthy diets, and the environment — without subsidy or coercion. We’ll see if these tasty new choices are a fad or a revolution, but don’t be surprised if one day the animal-rights community will have nothing better to do than worry about how to save cattle from joining the endangered-species list.