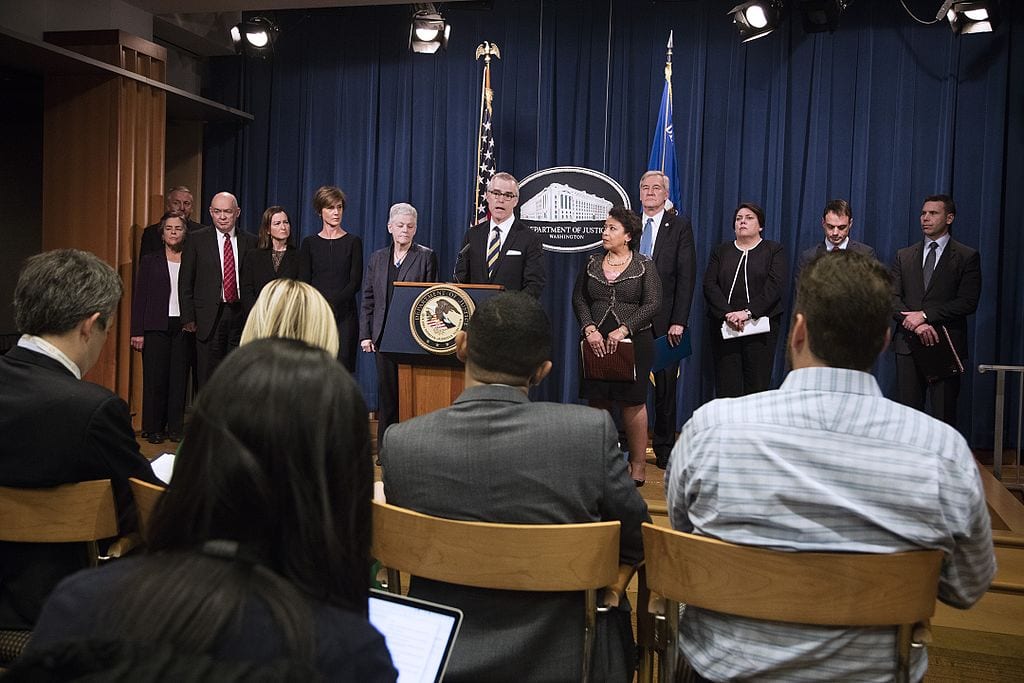 So on Monday, Andrew McCabe, the FBI’s deputy director, abruptly resigned his position. We should all be happy to see that given McCabe’s record of behavior not quite up to the standards Americans are used to from the nominally-nonpartisan and incorruptible Federal Bureau of Investigation.

This is someone whose wife took some $2 million, most of it raised by Clinton crony and governor Terry McAuliffe, in 2015 while running for a state senate seat in Virginia while he was second-in-command at the FBI during the time the Bureau was participating in what sure looks like a cover-up of the Clinton emails investigation AND the use of a Clinton-campaign-produced oppo research document in order to secure a FISA warrant for the intelligence community to spy on the Trump campaign. McCabe was up to his neck in both those disgraces.

Sure, it’s reasonable to think that’s someone who ought not continue as the Number 2 man at the FBI.

But McCabe’s ouster Monday should feel a little better than it does, shouldn’t it?

After all, it was demanded that McCabe go sooner, but current FBI director Christopher Wray reportedly blocked that firing. Wray supposedly threatened his own resignation if McCabe was packed off. This might be supportable on grounds other than a defense of McCabe, of course — Wray, who was named to replace the regrettable James Comey atop FBI, would be justified in insisting that he be given the freedom to have his own people and choose the timeline of their comings and goings, even though when reports surfaced last week of the director’s refusal to move McCabe much of the reaction cast perceived doubt on Wray’s fitness for his position.

But the inference being made among many in Washington and elsewhere is that Wray saw the soon-to-be-made-public House Intelligence Committee FISA memo — there was a vote Monday evening to release the memo to the nation, and within five days it will be everywhere for us to see — over the weekend, and on Monday the bell tolled for McCabe.

We say five days, because after the House Intelligence Committee voted on a 13-9 party-line vote to release the memo the Trump administration has five days to object to the release. The president has already said he wants the memo out; he isn’t going to object to its release.

The bell tolled for McCabe, supposedly, because his name is all over the document for all the wrong reasons. McCabe’s fingerprints are all over the FBI’s worst moments over the past couple of years. For example, one report has McCabe calling then-White House chief of staff Reince Priebus to inform him the FBI did not believe there was any collusion between Donald Trump or his campaign and the Russians. Then, when Priebus responded by asking McCabe to relay that finding to the media to put the Trump-collusion story to bed once and for all, McCabe is said to have leaked that conversation to the media as evidence Trump’s camp was attempting to obstruct the investigation.

And of course there’s the famous text by the FBI’s most infamous marital cheat Peter Strzok, the Democrat Party activist who sent 50,000 text messages to a woman named Lisa Page with whom he was engaged in an adulterous sexual relationship while both were plotting against Donald Trump’s prospective election…

I want to believe the path you threw out for consideration in Andy’s office — that there’s no way he gets elected — but I’m afraid we can’t take that risk. It’s like an insurance policy in the unlikely event you die before you’re 40.

There is also the matter of, according to Rep. Ron DeSantis of Florida, McCabe having instructed FBI agents not to refer to the Benghazi massacre as a terrorist attack. There is the fact that Alvi Awan, wife of suspected Pakistani spy and criminal House IT specialist Imran Awan, boarded a plane for Pakistan with an illegally large sum of cash under the nose of federal investigators perhaps with the permission of McCabe.

We could go on.

And yet Monday McCabe was allowed to take “terminal leave,” meaning he’ll be using up accumulated vacation days until he retires. He wasn’t frog-marched out of the J. Edgar Hoover building on his way to federal court.

Not yet, at least.

It just feels emptier than it ought to. But of course this story is just getting started, and once McCabe goes he’ll only be one piece of a large pie. By next week we’ll be poring over the House’s FISA memo, and pulling at the threads it presents us.

One wonders why Rod Rosenstein, the Number 2 man in the Justice Department who appointed Robert Mueller to conduct what appears to be an endless probe of the Trump-Russia collusion narrative despite an absence of evidence there is reason for such a probe a year on, is still around. Word has it the FISA memo is covered with Rosenstein’s name just as it is McCabe’s.

“When I walked down the aisle and saw that Walmart had placed all of the African American hair and skin products under lock and key, I had to pause; I had to step back; I was in shock. I realized that all the similar products for other races was freely available,” Ms. Grundy said.

And Allred was more demonstrative. “We think that it perpetuates a racial stereotype that African American customers should be suspected of being thieves and criminals,” she howled.

That this is transparent idiocy goes without saying, but this ought to be said: There is a reason the hair extensions Ms. Grundy is insulted to see locked in a glass case are so situated while others are not, and that reason is those products are far more likely to be shoplifted than the standard Wal-Mart item.

Anyone who’s ever been in a Wal-Mart knows very well that Wal-Mart is hardly unfriendly to black employees and customers. To take the extra steps to lock those hair extensions in a glass case can only be explained by hard data.

Wal-Mart’s response to the suit was, essentially, “We’ll see you in court.” The guess here is Allred and her client will go away long before this case ever gets in front of a jury, because she’ll not only lose, and badly, but some truths will be told in that case a lot of people would rather not see discussed. Whatever pittance it settles for will more than satisfy the plaintiffs, who had their press conference and thus are satisfied.

Gotta love it because the official name for the nation of Mauritania is the Islamic Republic of Mauritania. And that there are 40 different words for “slave” in Arabic, the holy language of the Quran. And that African slavery is being practiced primarily — exclusively? — by Muslims (as in the case of the open-air slave markets in Libya you’ve probably heard about) today, as it has been for more than 1,000 years.

And yet you find people in America of African descent who will convert to Islam and change their names to something Arabic because they believe America was founded in slavery.

Sunday night Hillary Clinton, who might be the most obnoxious and least meritorious individual ever to grace the American political stage, appeared in a skit airing during the Grammy Awards to read passages about Trump’s weight from Fire and Fury, the mostly-fiction political bestseller by the fabulist Michael Wolff.

A very appropriate entry by David French at National Review decried the “enduring awfulness” of Clinton, noting that just recently she was revealed as covering up sexual harassment by her “faith adviser,” a man named Burns Strider, who subsequently committed a similar offense while later under her employ.

French mentions that following the disclosure of that regrettable-yet-typically-Clinton fiasco, Clinton appeared in a video message “to all the activist bitches supporting bitches” of the Left. Then on Sunday she read from a book trashing Trump on national TV.

I’ll echo French’s sentiments. But I would also point out that it should be remembered that after she lost the 2016 election Hillary Clinton had armies of trolls bombarding Republican electors in states Donald Trump won with emails and phone calls for weeks trying to pressure them to become faithless and deny Trump the presidency.

Politico had a piece over the weekend mocking what it said were “millions of Americans” who saw Trump’s election as a kind of divine providence at work. That’s all fine, and well worth a few yuks from the Capitol smart set, but it doesn’t take much of an objective look paid to Clinton’s antics after she lost what looked like an unlosable election to believe, at least semi-seriously, that The Man Upstairs was looking out for the country not to allow her in charge of the country.

You don’t have to believe Donald Trump is the Lord’s representative on earth, and you probably ought not to believe that, to think God did us all a solid not putting Hillary back in the White House. That’s a minor miracle with major implications, and you should see that even if you’re not an evangelical Christian.