Amid the ceaseless cultural and political aggressions of America’s malign Left, occasionally there are moments of sublime entertainment.

Perhaps not so much for the few acts, in themselves, of political recrimination and revenge the Right is able to summon up, but for the sheer rage those acts bring forth.

The Left, as it happens, cannot abide a loss of any kind in the public square. It’s a movement comprised almost solely of dysfunctional and unstable people, miserable in their personal lives and living vicariously through the exploits of celebrities and politicians they favor, and they can no more process an election or a news cycle going wrong than, say, the most unhinged and delusional University of Alabama Crimson Tide fan could swallow a loss to Louisiana State University or the University of Georgia.

So, imagine what it does to them when Republican governors ship illegals dumped in their states by the Biden administration to blue locales that have declared themselves virtue-signaling “sanctuaries” for the world’s downtrodden.

Actually, you don’t have to imagine it. Because it’s happening, and it’s glorious.

On Wednesday, Florida Gov. Ron DeSantis, who has bristled for almost two years about the fact that Team Biden has been flying and busing illegals from the border to his state and has threatened to visit this affront upon the president’s party in turn, sent two planeloads of illegals to the progressive tourist paradise of Martha’s Vineyard.

And all hell broke loose.

Dylan Fernandes, the Massachusetts state representative for the island, couldn’t help himself, and he screeched about the migrant airlift:

If you got a kick out of Fernandes calling it “inhumane” that people were put on a plane to Martha’s Vineyard for free, you aren’t alone.

And then there was filmmaker Ken Burns comparing this to a “holocaust” on the supposedly newly centrist CNN:

It’s a profoundly stupid to propose that somehow it’s morally wrong to “use” illegals as political pawns when red-state governors do it if you’re unwilling to make the same criticism of the presidential administration, which is doing the same thing on a far greater scale. (READ MORE: Biden’s Border Cover-Up Becomes Border Standoff)

And yet that’s the argument the Left — to a man, woman, or in-between — is using now. With zero qualms or hesitations. It’s really something, isn’t it?

Unlike the Biden administration, which flies and buses illegals to red states under cover of darkness and gives no warning or explanation for any of it, DeSantis’ administration is perfectly happy to discuss the issue:

“States like Massachusetts, New York and California will better facilitate the care of these individuals who they have invited into our country by incentivizing illegal immigration through their designation as ‘sanctuary states’ and support for the Biden administration’s open border policies,” Fenske said.

“As you may know, in this past legislative session the Florida legislature appropriated $12 million to implement a program to facilitate the transport of illegal immigrants from this state consistent with federal law,” she added.

DeSantis was pretty matter-of-fact about the Martha’s Vineyard Holocaust. Asked a couple of questions on the subject during a Thursday press conference in the Florida panhandle, he didn’t back down for a second, and he calmly explained that what’s happening is simply “sanctuary” jurisdictions getting precisely what they’ve asked for:

What does Ron DeSantis do on the start of Hispanic Heritage Month? Funds the deportation of refugees to another state.

These are families who've risked their lives to flee Maduro's socialist regime for the promise of freedom — children and families used for political theater.

He sent them to Martha’s Vineyard, you nonce. Do you really think the people of Florida are going to punish him for that?

But for sheer comedic genius, DeSantis might actually have to take a back seat to this:

Texas Gov. Greg Abbott wins the day, because of this:

Vice President Kamala Harris is the border czar, she says it’s secure, and then three buses full of Venezuelans who waded across the Rio Grande into Del Rio, Texas, without anybody stopping them show up almost on the front lawn of her residence at the Naval Observatory.

But Abbott, who like DeSantis is going to win reelection handily over a washed-up claiming horse of a Democrat retread opponent, might own the advantage of having provoked the most unhinged response of all. Just five busloads of migrants sent to Chicago led to this:

Somehow Illinois Gov. J.B. Pritzker thinks that he’s going to — what? Arrest Abbott for busing illegals to Chicago? What an embarrassing blowhard.

This feels like the farting sound a balloon makes when it’s deflated.

Perhaps we’ll call it “social justice.” But what it really comes down to is an example and a new standard for how conservatives and Republicans should govern.

At every turn they should be seeking to humiliate and expose incompetent leftist clowns like Harris, Pritzker, Lightfoot, Washington, D.C., Mayor Muriel Bowser, and others. For another example, there’s Mississippi’s erstwhile mild-mannered Republican Gov. Tate Reeves, who, faced with the Jackson water crisis, stepped in to bail out that Democrat-ruined city. But Reeves insisted on taking the water system away from Jackson Mayor Chokwe Lumumba, who once boasted of creating a majority-black independent nation out of the states of Louisiana, Mississippi, Alabama, and Georgia. And even better, he made Lumumba stand next to him at the podium when he announced that Jackson wasn’t capable of managing its water supply.

So, you had this: 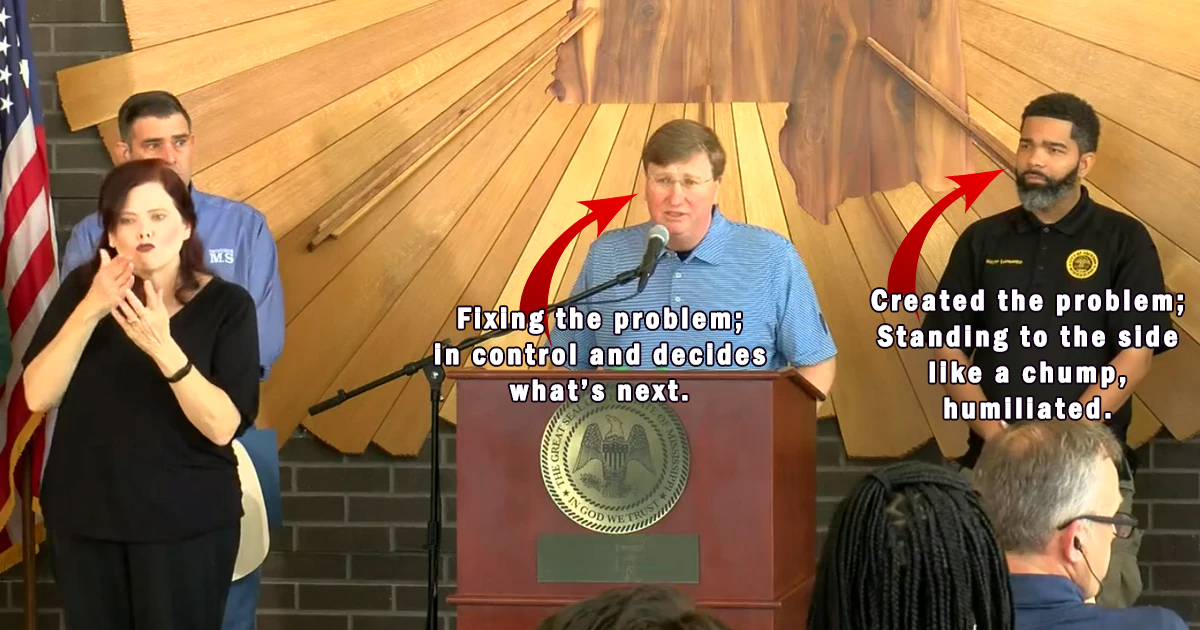 The old Stupid Party GOP specialized in jumping in to save Democrats from themselves, thinking that somehow that was going to earn them positive press or some sort of political consensus in their favor. If that was ever operable, it clearly stopped being so decades ago.

DeSantis and Abbott get that, and the new standard is very different.

Which is a good thing.

Democrats create hellscapes wherever they’re in charge, and then they seek to blame Republicans for their malign incompetence and outright malfeasance. They’re owed nothing but contempt in return.

Florida and Texas save money by shipping illegals, who are let into the country by a Democrat president, to Democrat jurisdictions that call themselves sanctuaries for illegals.

And those Democrat politicians who are getting precisely what they’ve asked for look like unmitigated morons for complaining about the cows coming home.

That’s the bottom line. It’s a moment of clarity. And it should be cherished.