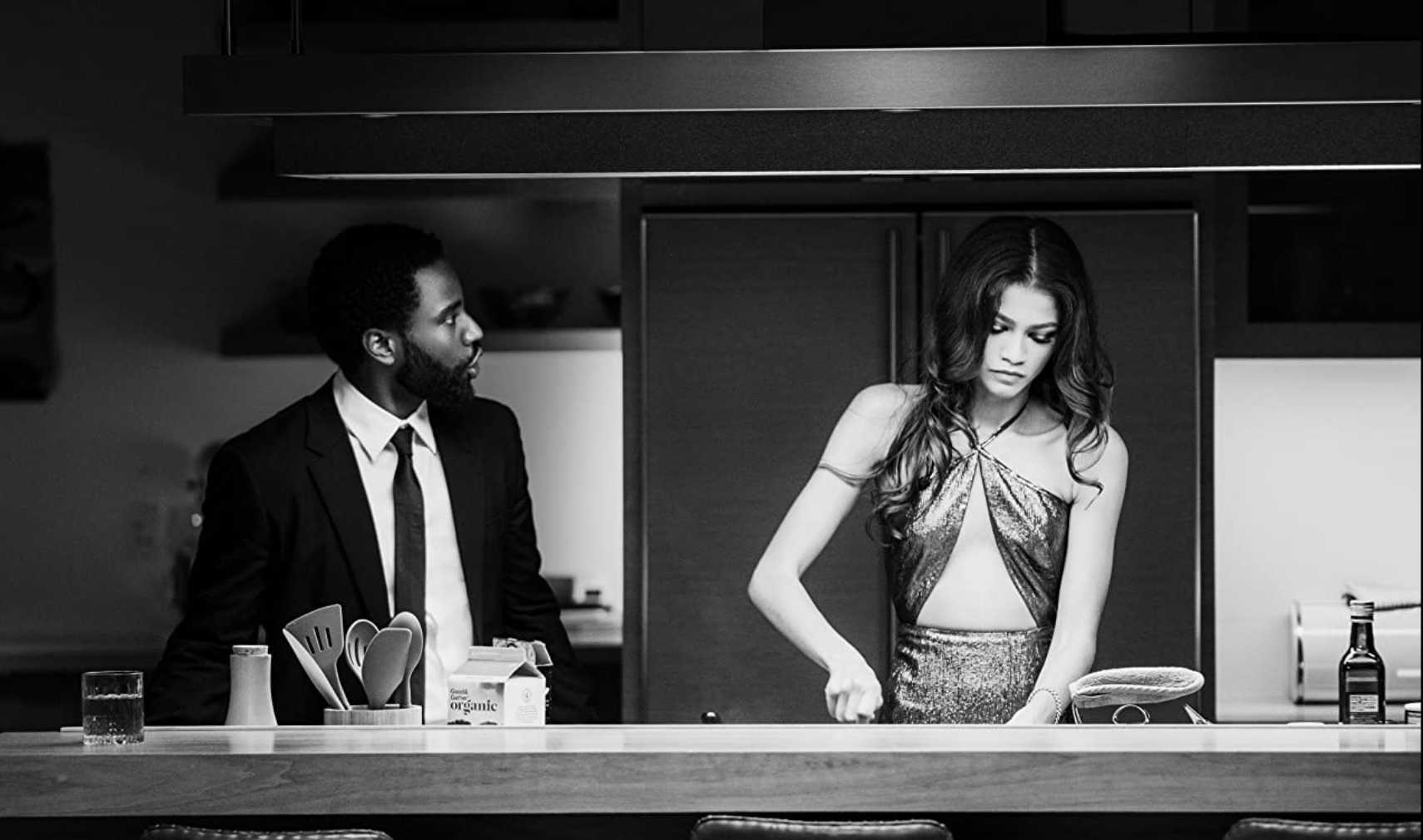 The only reason I watched Malcolm & Marie on the first day of its Netflix release was that the reviews piqued my interest: they were so unrelentingly negative that I felt I just had to see this monstrosity. As you’ll see, I didn’t end up loving the movie, but I’m impressed by some of the views that the director — mostly through his alter-ego protagonist — dared to express.

But first, to the critics. Calling it a “pulverisingly smug romantic drama,” the Telegraph‘s Robbie Collin summed up the premise of Malcolm & Marie: Malcolm (John David Washington), an acclaimed movie director, and Marie (Zendaya), his girlfriend, return home from the successful premiere of his latest release. He’s elated. But she’s angry because he forgot to thank her in his speech. There ensues “an epic yelling session” in which they air their gripes with each other and the world.

Collin’s description of the film immediately brought to mind Who’s Afraid of Virginia Woolf? (1964), directed by Mike Nichols and based on Edward Albee’s play. Christopher Pahle’s Malcolm review in Norway’s Dagbladet drew the comparison only to make the point that Sam Levinson, the writer and director of Malcolm & Marie, “is no Albee.” Malcolm, wrote Pahle, operates in two gears, “enraged and horny,” while Marie specializes in “scowling passive-aggressiveness,” and the film itself is as “self-absorbed and pretentious as the characters.” Vulture’s Angelica Jade Bastién, calling the film “wholly rotten … a failure on nearly every level,” also brought in Virginia Woolf, arguing that while works like Albee’s “burnish our curiosity,” Levinson’s film “nullifies it.”

What do I think of Malcolm & Marie? Although I agree with some of the criticisms, I found it thoroughly watchable. Not much more than that, but definitely not “wholly rotten” either. The actors throw themselves into the story with gusto. The black-and-white cinematography by Marcell Rév is absolutely gorgeous.

And the movie certainly echoes Virginia Woolf. The first few moments, in which the title characters’ car drives slowly up to their house, bring to mind the opening credit sequence of Woolf; when they walk inside, one almost expects Marie to say “What a dump” — although their fancy digs are anything but a dump. As in Woolf, the two leads reel back and forth between rage and ardor, ultimately questioning each other’s mental health. One difference: whereas Martha, in Virginia Woolf, resents George’s professional failure, Marie is triggered by Malcolm’s success.

Yes, Levinson’s film is yet another example of Tinseltown navel-gazing — Hollywood people thinking that their own lives are fascinating. But it’s refreshing to see a movie with a totally black cast (two out of two, in this case) that isn’t set in the hood or in a Mississippi shack; where the leads aren’t butlers, maids, chauffeurs, crooks, cops, athletes, blues singers, or jazz pianists; and where the script isn’t preaching about racism but complaining about preaching about racism. (And I say this as a big fan of Green Book and The Butler.)

When Malcolm isn’t arguing (or snuggling) with Marie, he’s ranting about movie reviewers, especially a particular white woman at the Los Angeles Times. She’s given his new film a rave, but he’s irked nonetheless at her patronizing race- and gender-centered take on it. In her review she mentions the “white savior trope.” She’s reflexively PC. “She’s not looking at the film!” Malcolm shouts; she’s just seeing him as black and male. “You can’t hang everything on identity!” he insists, asserting that critics such as that woman “don’t know about film, they know about ‘authenticity.’ ” You can get authenticity, he fumes wonderfully, on YouTube! You don’t go to Citizen Kane or The Best Years of Our Lives for authenticity — you go to them for the glory and mystery of art! In an impressive soliloquy, Malcolm savages “woke” thinking, the notion of “systematic racism,” the current obsession with identity groups, and the widespread belief — among mainstream reviewers, anyway — that a movie populated by blacks needs to have a political message.

I loved hearing this character say all this stuff. I loved that Malcolm is irked that the Times lady compared him to Spike Lee and not to William Wyler — who, Malcolm has to explain to Marie, directed The Best Years of Our Lives, The Heiress, Roman Holiday, and Ben-Hur. I loved that he loves Wyler. I loved hearing him, a black man in the year 2021, singing the praises of The Heiress (1949), a story about upper-class white people based on the 1880 novel Washington Square by Henry James. Malcolm’s additional name-checks of movie legends Billy Wilder, Ben Hecht, David O. Selznick, and George Cukor were also music to my ears. Ditto Marie’s mockery of PC actresses “talking about socialism on a red carpet.” And, not least, Malcolm’s taste in music: during one of the romantic lulls amid the fighting, he and Marie make out to John Coltrane’s recording of Duke Ellington’s “In a Sentimental Mood.”

The dialogue in Malcolm & Marie has been criticized for being contrived, inauthentic. In fact, what Levinson is being faulted for is writing like, well, Ben Hecht and Billy Wilder. Or Joe Mankiewicz, who won Oscars for writing and directing A Letter to Three Wives (1949) and for writing and producing All About Eve (1950). At midcentury, Mankiewicz’s sophisticated, dialogue-heavy scripts were considered models of the genre. In later years, however, when movies like Marty (1955) and Rocky (1976) won Best Picture Oscars despite screenplays that were largely a series of grunts, Mankiewicz’s style was considered highbrow and overly talky.

Well, I like talky. I miss talky. I enjoyed hearing Malcolm toss off words like “solipsistic.” The angry but articulate back-and-forth between him and Marie brought to mind Bette Davis’s fierce but witty arguments with Gary Merrill in All About Eve. Reading the reviewers on Levinson’s dialogue, I got the impression that there’s something wrong with writing literate dialogue nowadays, especially for black characters. It seems to me that one of the goals of the civil rights movement was, or should have been, to end up with a society in which impeccably dressed black people living in a luxurious dwelling could have incredibly literate squabbles with each other.

Yes, part of the reason why Malcolm & Marie got bad reviews is that, well, it’s not all that great. But part of the reason is also that Malcolm is right: movie reviewers today are uncomfortable with films about black people that don’t foreground racial politics. The Guardian reviewer Robert Daniels made this attitude explicit. Responding to Malcolm’s frustration with being judged through the lenses of race and gender, Daniels lectured that even a light comedy like the Eddie Murphy vehicle Coming to America (1988) has deeper layers of meaning related to racial pride and the legacy of slavery.

Levinson’s offense, in Daniels’s view, is that he “uses Malcolm as a black shield.” What’s the logic here? Well, try to follow this: when Malcolm’s rage at white critics comes to focus on that one white female critic, Levinson is, according to Daniels, crossing a line — because Levinson, a white man, is using a black male character to attack a white woman, who may or may not be entirely fictional. Now, while the current identity-group hierarchy allows a black man to criticize a white woman, it doesn’t allow a white man to do so, because, as Daniels puts it, the white man — Levinson, in this case — doesn’t “carr[y] the weight of systematic oppression” that a black man does. Blacks, you see, still live under the shadow of slavery, but Jews and the Holocaust? Nope! Get that?

Bottom line: for all its failings, Malcolm & Marie has a moral seriousness that most contemporary films don’t. And the main reason why so many critics have gone after it so aggressively is, quite simply, that Sam Levinson has dared to condemn their lazy ideological groupthink and to tip his hat unashamedly to the aesthetics of the Golden Age Hollywood of the pre-1970s. More power to him.