My MAGA review of 2017, the year America became great again, continues today with a day-by day look at March. 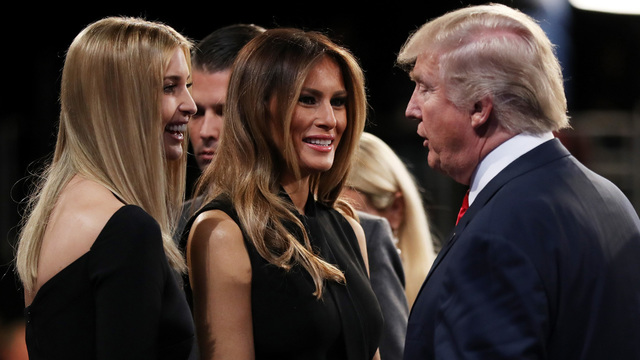 March 2: “Two illegal immigrant gang members from El Salvador who had a Satanic shrine in their Houston apartment are suspects in the killing of one teenager and the kidnapping of another, authorities said.”

Dreamers? Call them what they are: Nightmares.

March 3: “Juan Thompson, the St. Louis native arrested for making bomb threats against Jewish centers, used to write at left-wing website The Intercept before being fired for fabrication.”

Once again, the anti-Semite is a liberal.

There go the hopes for a Democratic Party revival in the Mountain State.

March 5: “The Supreme Court on Monday sent a dispute over a Virginia transgender student’s bathroom access back to a lower court, without reaching a decision.”

How did the federal government become the school bathroom monitor?

March 8: “Samsung Electronics Co. is planning a major investment to expand its U.S. production facilities, according to people familiar with the matter, with at least five states in discussions. The initial capital investment is expected to be around $300 million, several of the people said, with Samsung shifting some production of oven ranges to the U.S. from Mexico. The move could generate around 500 jobs, those people said.”

The polls are catching up with the American people.

Guess not everyone wants to Make California Mexican Again.

They are immigrants from Nigeria.

Public money is like holy water in Washington. Everyone takes some.

I thought “Punk’d” was on MTV, not MSNBC.

March 15: Snoop Dogg releases a video showing him shooting the President of the United States.

Kids, just say no to pot.

March 16: “Humpback whales are organizing in huge numbers, and no one knows why.”

Have some political pollsters ask them. We still won’t know why, but we will have plenty of pretty numbers and charts, and Nate Silver will come around later and explain why Hillary still has a 71% chance of winning.

March 17: The Washington Post reported, “Immigrants are now canceling their food stamps for fear that Trump will deport them.”

March 18: “The global economy enjoys a synchronized upswing. The past decade has been marked by a series of false economic dawns. This time really does feel different.”

This time we elected a president who knows what he is doing.

I remember when Disney was a pro-American, law-abiding company. I feel so old now.

March 21: “In an Unprecedented No-Show, the U.S. Pulls Out of Planned Human Rights Hearing.”

The press immediately demanded that Nunes be kicked off the intelligence committee. I’m serious.

March 23: “FBI Director James Comey is unpopular across the political spectrum, according to a new poll that finds voters have a negative opinion of Comey by a more than two-to-one margin. According to data from a Harvard-Harris Poll survey of registered voters provided exclusively to The Hill, only 17 percent have a favorable view of Comey, compared to 35 percent who have a negative view of him.”

Six weeks later, Trump fired him, and Comey became a darling of the Left again.

They go there because that is where the illegal aliens are.

March 25:
You know who else didn’t use a lot of electricity?

March 26: “An unauthorized immigrant kidnapped  a woman who had been providing him food and water for three days in South Texas, officials said.”

Trump has been using executive orders to tie the hands of rule makers. He put in place a regulatory freeze during his first hours, mandated that two regulations be repealed for every new one that goes on the books and ordered a top-to-bottom review of the government with an eye toward shrinking it.

Any day now, Trump is expected to sign an executive order aimed at undoing Obama’s Clean Power Plan and end a moratorium on federal-land coal mining. This would ensure that the U.S. does not meet its commitments under the Paris climate agreement.

The administration is also preparing new executive orders to re-examine all 14 U.S. free trade agreements, including NAFTA, and the president could start to sign some of them this week.

Just thought I would throw that in there amidst the daily doses of Trump not “acting presidential.”

North America’s Building Trades Unions sent the White House the wish list of 26 projects, including more than $80 billion worth of energy transmission lines, water and wind projects, and pipelines across the country.

More than half of the projects on the list given to Trump aide Stephen Miller are privately financed. All but one are in the midst of permitting and could use the Trump administration’s help in the form of regulatory relief.

Using the bureaucracy to get work done instead of blocking it. What a concept!

March 29: From Foreign Policy magazine, “Trump Has a Strategy for Destroying the Islamic State — and It’s Working.”

In December, the Times Washington bureau announced it was hiring a fact-checker.

March 31: “Millions of gallons of raw sewage and untreated runoff have poured into the United States’ second-largest estuary since a massive sewage treatment plant experienced equipment failures that forced it to stop fully treating Seattle’s waste.”

Industry cannot compete with government when it comes to polluting. Ain’t that right, Animas River?