My MAGA review of 2017, the year America became great again, continues today with a day-by day look at April. 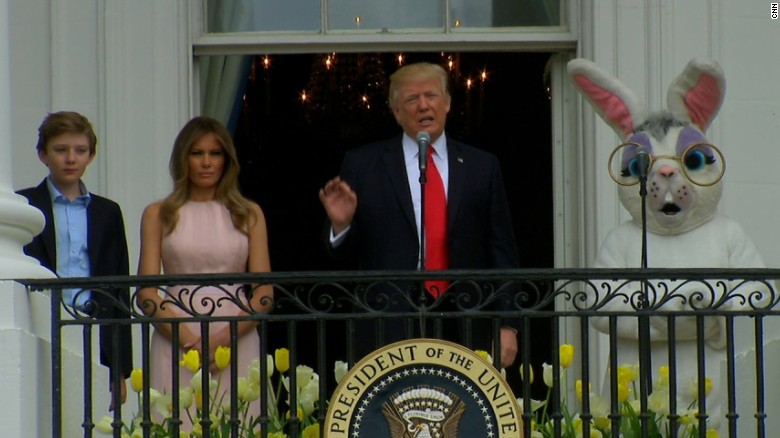 April 1: “Together, 27 White House officials had assets worth at least $2.3 billion when they joined the administration.”

Most of them took pay cuts to serve America.

April 2: The richest man in the world got a taste of his “Democracy Dies in Darkness” politics last night as hundreds of gay protesters hit the streets near his mansion in the Kalorama neighborhood of Washington, which is one of the wealthiest neighborhoods in the world.

They went to protest at Ivanka Trump’s home. She and her family were in New York visiting relatives. I trust Bezos enjoyed the disruption.

Newt Gingrich, the former House Speaker and presidential candidate, said Sunday that the evidence of collusion with Russia points to Democrats, not Republicans.

“It is ironic that all of the real evidence of real money and real influence-buying relates to Democrats,” Gingrich told Fox News’ “Sunday Morning Futures with Maria Bartiromo.”

April 4: “CNN Had a Problem. Donald Trump Solved It.”

April 6: “The United States fired 59 Tomahawk cruise missiles at Syria overnight in response to what it believes was a chemical weapons attack that killed more than 100 people.”

President Trump did this over dinner with Chairman Xi at Mar-a-Lago. Ho-Ree Sheet.

April 7: “Judge Neil M. Gorsuch was confirmed by the Senate on Friday to become the 113th justice of the Supreme Court, capping a political brawl that lasted for more than a year and tested constitutional norms inside the Capitol’s fraying upper chamber.”

Which is better? Liberal tears or Never Trump tears?

Trick question. They are the same.

Actually, it said “you can keep your doctor” was true before it voted it Lie of the Year five years later.

April 10: “The Kremlin said on Monday that U.S. Secretary of State Rex Tillerson will not meet President Vladimir Putin when he visits Moscow on Wednesday, a move that could point to tensions over a U.S. missile attack on a Syrian air base last week.”

Don’t know which Trump sucks at worse — being Hitler or being Putin’s puppet.

April 11: “Bill O’Reilly Is Going on Vacation. Will His Show Return?”

In three months, Trump did what Obama was unable to do in eight years.

April 13: “The U.S. dropped a bomb with an explosive force equal to 11 tons of TNT on a cave complex used by the Afghanistan branch of the Islamic State of Iraq and Syria on Thursday, the Pentagon said.”

The Mother Of All Bombs was dropped on my mother’s 93rd birthday.

April 14: “Democratic lawmaker on voucher-bill sponsor: ‘I wanted to punch her in the throat’.”

The war on women continues.

April 16: “Immigration arrests rose 32.6 percent in the first weeks of the Trump administration, with newly empowered federal agents intensifying their pursuit of not just undocumented immigrants with criminal records, but also thousands of illegal immigrants who have been otherwise law-abiding.”

April 17: “Kellyanne Conway on Monday chalked up a fresh wave of protests directed at President Donald Trump over the weekend, some of which turned violent, as attempts by stubborn liberals to relitigate last year’s presidential election. It should fall to the leaders of the Democratic Party, the counselor to the president said, to quell the violence that has marred some anti-Trump demonstrations.”

His amnesty had expired in August 2015. He was caught trying to re-enter the United States.

But otherwise, he is law abiding.

April 19: “An illegal immigrant, along with another man, is accused of kidnapping and repeatedly raping a woman with autism while holding her against her will.”

But otherwise, he is law abiding.

Sources? When you stop taking the meds, the voices in your head return.

Well, that was where the Founding Fathers sent the letter.

April 22: “President Trump will hold a rally in Pennsylvania the night of the White House Correspondents Dinner, he said Saturday.”

He went where the votes are.

April 23: “The proposed wall along the U.S.-Mexico border could be paid for by reducing erroneously issued tax credits that go to “mostly Mexicans,” said Attorney General Jeff Sessions on Sunday.”

Erroneously paid? That’s how it was set up.

April 25: “Senator Ted Cruz wants to use assets seized from drug lords such as El Chapo, the Mexican kingpin who was recently extradited to the U.S., to pay for border security and the border wall.”

Hillary wasn’t the only bullet we dodged in 2016.

Otherwise law-abiding people no longer have to obey laws in Baltimore, the wackiest city on Earth.

Melissa Mackenzie
Follow Their Stories:
View More
Melissa Mackenzie is Publisher of The American Spectator. Melissa commentates for the BBC and has appeared on Fox. Her work has been featured at The Guardian, PJ Media, and was a front page contributor to RedState. Melissa commutes from Houston, Texas to Alexandria, VA. She lives in Houston with her two sons, one daughter, and two diva rescue cats. You can follow Ms. Mackenzie on Twitter: @MelissaTweets.
Most Popular
1
Hither and Yon
POTATUS Speaks, A Nation Groans
by Scott McKay