Serve and Volley French Africa,Mother’s Day,Novak Djokovic,Spain,Tennis Madrid Maestros … y Madres - The American Spectator | USA News and Politics
Menu
Serve and Volley
Madrid Maestros … y Madres
They made it all possible, but the rest is up to you.
by Roger Kaplan
Carlos Alcaraz Garfia interviewed after defeating Novak Djokovic in Madrid (YouTube) 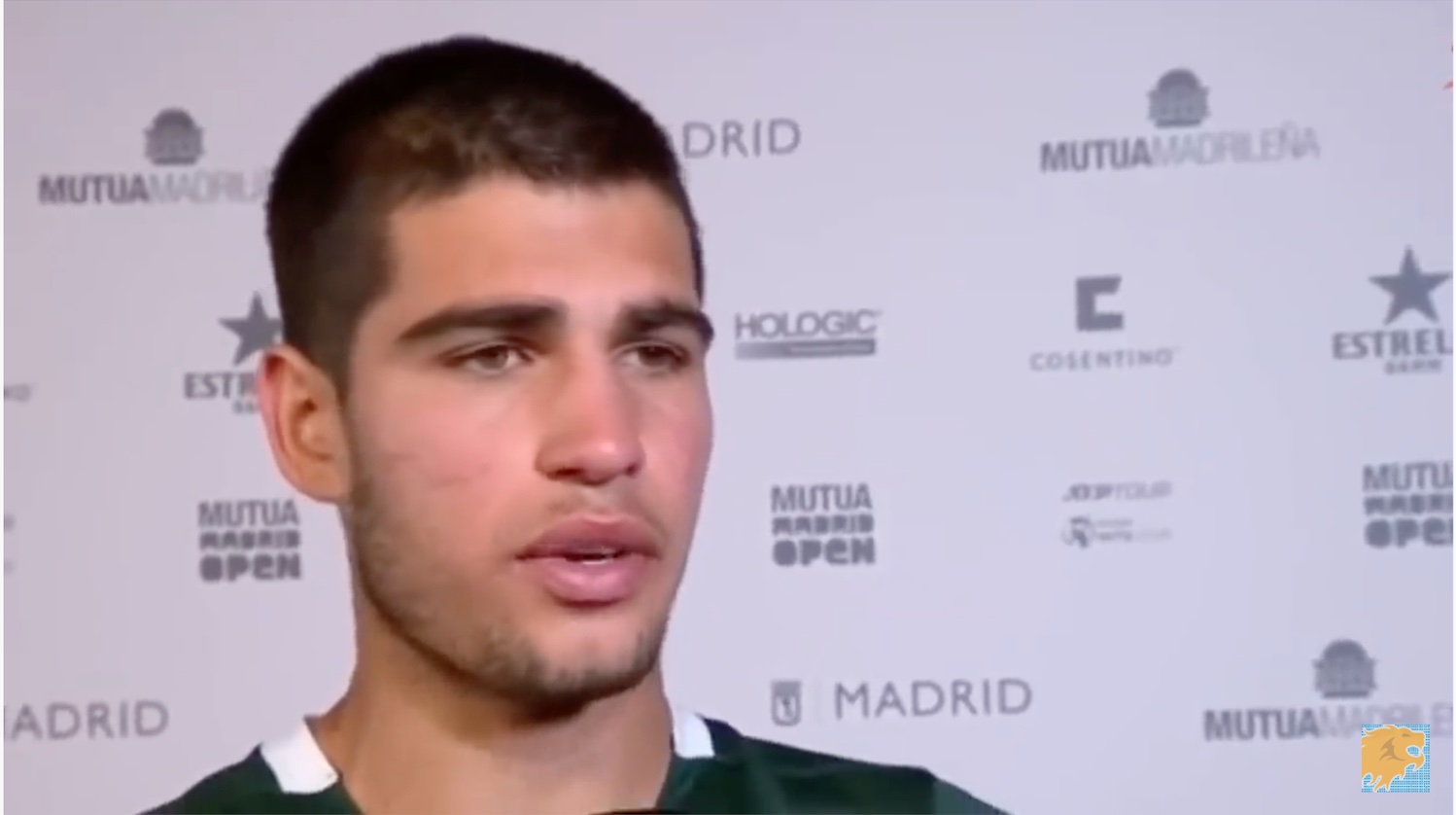 Funny thing about victory speeches on the tennis Tour, you get the winner standing there, the adrenaline still flowing, listening to the emcee; retired American Great Jim Courier has been a witty and popular regular in this slot. He says bravo and wow and what a match and then pushes the mike at the champ.

Any question, especially a deep-think question like “Are you happy?” gets them going, all the pent up tension and self-control can be released and the excitement and the joy moves into the sudden void as they stutter a little and compose themselves and grin at Courier’s gentle ribbing and shake their heads and move their toes and blurt out…

… It’s the happiest day of my life I love this place it’s such a great place it’s one of my favorite places I wanna thank the tournament organizers they’re such great guys and all you guys in the stands and I gotta say my opponent what a great guy he (or she; guy has become intergenderal) is and it could’a gone either way but I just played my game and I was able to play at the highest level which is the only way you can win against these great players I have faced all week and I gotta thank my team I couldn’t do it without you guys and I’ll be back next year I can’t wait this is my favorite place what a scene thanks…

Then it is off to the airport to catch the plane to Rome, if this is Madrid, just a short flight and even though play already has begun over there, as a top player you will be in a position in the draw where you have plenty of time to settle in and warm up with a little practice and be rested recovered ready for your first match and — what’s missing here?

Mothers. They thank everybody, they are effusively nice about winning (or losing if they came in runner-up, which is still winning against sixty-two other guys, or girls), they are happy because they are very young and very talented and very rich. The purse at the Mutua Madrid this year was thirteen million euros, men and women’s draws combined, it is nearly as much at Rome, and at Paris it will be about 46 million in real money (American), but there are twice as many players there. And if Nike or Uniqlo thinks you look good advertising their names, the sky’s the limit.

The Mutua Madrid final was on Mother’s Day, so I, this is an editorial intruding into a facts-only report now, but I cannot resist, I hope they remembered their mothers and in fact from diligent study of the sociology of this sport I am pretty confident they did.

Even so, they rarely thank their mothers in these breathless speeches. Lately at least, with the exception of the best women players, Venus and Serena Williams, I’ve rarely heard any of these post-match thankyouguys speeches directed a anybody’s mother. Emma Raducanu, the young Brit star of last year’s U.S. Open, mentioned the work ethic her mom infused in her at a young age, but frankly all that did was remind me of P.J. O’Rourke’s warning to hard-driving Chinese moms: “A students work for C students.” If memory serves, she was speaking in a post-tournament interview, not on the legendary floor of Arthur Ashe Stadium right after the final.

In Madrid, to take the place that gripped the world in the first week of May, these mighty caballeros de las pistas, these maestros de las raquetas, sure, they have plenty people to thank. For example, Juan Ferrero, Spanish Immortal and world No. 1 in the early aughts, now a superb coach. His star pupil is Carlos Alcaraz Garfia, the sensational teen who beat Rafael Nadal on his 19th birthday despite spraining an ankle in the second set and then beat the world No. 1, Novak Djokovic, in another three setter.

Nadal, who is 35 and who has been champion here five times, played with a stress fracture sustained at the Indian Wells tournament earlier in the year. He took the second set 6-1 though, and the third required a tie break which by itself rendered the match priceless, even watched on screen. Ankle or no, the phenom — the natural — from Munar (southeast Spain near the coast), caught everything sent to him, racing to the sidelines and catching shallow drops just inches before the second bounce. He seemed to catch his breath in the second set, which Nadal won 6-1; in the third, his tactic was to let the greatest clay champion in the history of the sport attack, get him into a rally, and then abruptly turn the tables with a risky but obviously self-confident passing shot that never missed, no matter how hard the pace put on the ball.

You would think after that, he would say either say I’ve done the job, beaten the man I grew up idolizing, but the job was not done yet and a day later the young caballero was at it again, this time against world No. 1 Novak Djokovic. Like his great rival, the mighty man of Belgrade labored under a handicap, mental more than physical, in that he had not been playing since the covid-control fiasco that kept him out of the Australian Open — and deported from Australia — despite Tennis Australia having assured him that he would be given a medical exemption to his no-vax status. Mental or physical, the toll weighs; and on the Tour, not playing for weeks against the best has a price that even practicing with hitting partners or against the wall cannot compensate.

Djokovic was in good form in Madrid, and he is no slouch on clay, having won the French Open twice (including last year). Nadal is the defending champ at Rome. But Alcaraz had just won Barcelona. Nadal, twelve times the winner, was absent and Djokovic was in Belgrade, where he lost the final to Andrei Rublev, who with other Russians and Belorussians has been banned from Wimbledon due to Putin’s criminal aggression in Ukraine. Also Alcaraz had won on clay at Rio de Janeiro during the winter, as well as on hard at Miami a few weeks ago. It took three sets again, each of them very close (tiebreaks in the first and third) but somehow even more than against Nadal, Alcaraz seemed to be dictating against Djokovic, controlling the pace and finding the opportunities to pull the trigger to end rallies.

The final, against defending champion Alexander Zverev, was, to the untrained eye, a formality, 6-3, 6-1. In fact, Zverev was relentless in his big forehands, his immense serve, his reach from either corner. Alcaraz had to play his best to keep things under control, with his own powerful and precise winners and his surgical drop shots from way back, which Djokovic in particular had admired even as they cost him dearly.

Whether or not Carlos Alcaraz mentioned his mother in the post-tournament interviews I cannot report, but it is certain he could not have accomplished this feat but for her. And what about the fathers? Carlos Alcaraz’s father was a journeyman tennis player in his time and instilled the passion of the sport in his middle child. I am sure he is proud and happy. Rome is next, and it is a big tournament, but inevitably all eyes and expectations are on Roland-Garros, which closes the clay season. The competition at Rome will be fierce, but it is at the French Open in Paris that Rafa Nadal (13 trophies), and Novak Djokovic (defending champion) will be waiting.

There have been some off the charts crazy dudes in the tennis father category, but I am not naming names. However, I noticed a recent marketing ploy by the only acceptable after shave for American men, Old Spice. “If your grandfather hadn’t worn it, you wouldn’t exist.” Neat point, made me buy a few extra bottles of the stuff, and I bet the Madison Avenue fella who thought it up got a raise.

Richard Williams, portrayed by Will Smith in a recent biopic, certainly deserves credit along with his ex-wife, Oracene Price, a physical ed instructor and tennis coach. Richard gave what he could, obsessive drive to be the best, but can we doubt Oracene’s contribution?

Mothers’ contributions, who can ever give a full accounting? Oumou Sangaré, one of the best known of the great vocalists from Mali, is herself the daughter of a singer, Aminata Diakite, who was as well. Oumou Sangaré praises and thanks her mother, and mothers, in many songs. A good example is “Minata Waraba.”

Oumou, which comes in various versions and spellings , or transliterations — the Hebrew would be Ima — is not uncommon for first-born daughters in the regions of my own Oumi’s extended family. The parents expect to have many children, as her parents did. They take for granted the first daughter will help raise them, even as the first son will help provide for them. As will all the others, of both genders, but in diminishing degrees of authority and responsibility. This may have something to do with why they all call me papa unless they are close enough in age to say brother.

Oumi thinks we should eventually develop a tennis program at the school she is building in Abidjan, which is focused on crafts and trades and language and computing and accounting skills, since the aim is to give kids from poor neighborhoods a chance to earn the living by which they can sustain their families and contribute to their communities. You give what you can, from the Creator and from your mother.