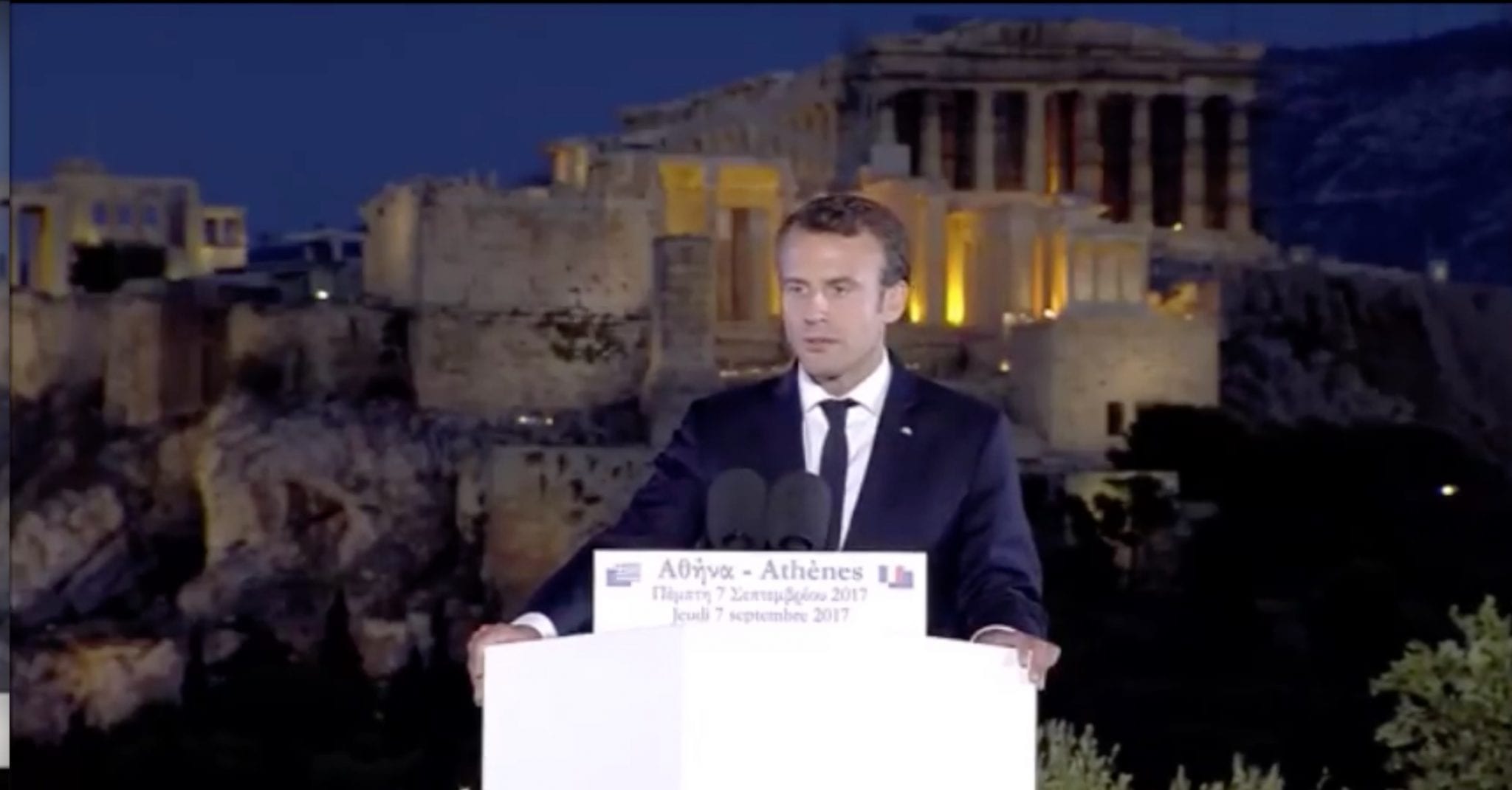 Media coverage of French President Emmanuel Macron’s meeting with President Donald Trump predictably focused on the banal, dandruff-brushing aspects of the burgeoning bromance. Some liberal outlets highlighted lines in Macron’s address to Congress that reproached his host, the insolence made more delicious when uttered by their favorite world leader next to Justin Trudeau. But Macron’s speech reveals a deep fissure within the West about its most fundamental values — a fracture that comes as the West faces powerful challenges from outside its borders.

Macron’s speech to Congress represents one set of values: the statist orientation of the bureaucratic EU elite. Leaving aside the incongruities any sweeping address may have — saluting “the #MeToo movement” in one breath and praising Simone de Beauvoir, a Marxist atheist who serially seduced her underage female students, the next — such a vapid moral basis renders even a well-delivered speech hopelessly self-contradictory.

He dubbed the U.S. and France the defenders of “universal values,” which have somehow, despite their purported universality, fallen under attack. He then offered his own Credo, significantly longer and less compelling than the one drawn up by the Nicene Council.

In brief, it consisted of his proposal for judges to censor “fake news” shortly after extolling Thomas Jefferson, who opposed all efforts “to silence by force & not by reason” the “complaints or criticisms” of the press — even if the headlines were “unjust.” Macron expressed support for both the Paris climate agreement and “the middle classes,” although Green energy policies have separated families from larger slice of their income and, sometimes, from one another. And he opposed deregulation, which has been President Trump’s greatest accomplishment not surnamed Gorsuch.

Grounding such thin grueling morality agrees with the regnant European self-conception, which is suffused with secularism and, for lack of a better word, science-ism. It is telling that the first standing ovation Macron received — from the Democratic half of the chamber – came when he mentioned science. When German authorities proposed rebuilding the Berlin Palace exactly as it was, topped with a Christian cross, a liberal group petitioned to replace the cross with a microscope.

However, science is descriptive, not prescriptive. Moreover, the Left’s selective enthusiasm for science focuses almost exclusively on government programs to combat man-made climate change, bypassing such disciplines as embryology or human biology.

If a synthesis of Judeo-Christian religious and moral principles, Greek philosophy, and Roman law flowered into European civilization, these are its weeds.

In this outlook, the highest moral good comes in creating more government programs or — if possible — new layers of government. Hence, Macron’s speech last summer at the Acropolis proposing a new parliament for the 19 member states of the eurozone — on top of the European Parliament and the European Commission — which would have its own budget worth “several percentage points” of the zone’s GDP.

In the EU’s technocracy, values are the product of remote scientific and economic experts who determine whatever-it-is-we-believe-this-week.

Such “European values” are not confined to Europe. New York City Mayor Bill de Blasio announced through his secretary that Hizzoner would join an anti-Trump rally in Germany before the G-20 summit because its organizers expressed “New York and American values.”

Historically, the West rested upon a firmer foundation. Perhaps the best articulation of Western values in recent memory came from Donald Trump, not in Germany, but in Warsaw last July. Of all 17 Republican presidential hopefuls, Trump seemed least likely to incite teeming crowds of foreigners to “fight… for God!” Yet that exhortation formed part of his speech, which defined faith, family, and free markets as core values of Western Civilization.

“The steady creep of government bureaucracy that drains the vitality and wealth of the people,” Trump said. “The West became great, not because of paperwork and regulations, but because people were allowed to chase their dreams and pursue their destinies.”

His words echo Pope John Paul II’s words in Centesimus Annus that the welfare state “leads to a loss of human energies and an inordinate increase of public agencies.” One may also recall Tocqueville’s observation that government regulation “does not break men’s will, but softens, bends, and guides it …it hinders, restrains, enervates, stifles, and stultifies” to the point that society becomes “a flock of timid and hardworking animals with the government as its shepherd.” Suspicion of government taps into the West’s innate and fundamental beliefs in a way “tax avoidance” never can.

Trump’s view of the West placed “faith and family, not government and bureaucracy, at the center of our lives.” He upheld the importance of debating every topic freely. “Above all,” he said, “we value the dignity of every human life, protect the rights of every person, and share the hope of every soul to live in freedom.”

“The fundamental question of our time is whether the West has the will to survive” by embracing these values, which forge “bonds of history, culture, and memory” — a phrase reminiscent of Lincoln.

But can those ties intertwine nations separated by oceans if they no longer tie Europeans to their own civilization? Today’s (childless) EU leader has an entirely different conception of society its innovators, whom (s)he sees as, if not deplorable, then hopelessly outdated. Observers, ecclesiastical and secular, have asked whether the freedoms that grew out of the Christian faith can long endure if belief flags. Douglas Murray wrote in The Strange Death of Europe that, in their haste to jettison its religious trappings, European politicians had “left unresolved the question of whether or not our acquired rights were reliant on beliefs that the continent had ceased to hold.”Will the West be able to uphold its timeless values based upon nothing more than EU rhetoric about an “ever-closer union,” especially in light of a determined and epistemologically certain subgroup that does not necessarily share them?

Forgive us if we do not follow Europe down a path so inclined to lead us into perilous uncertainty and, possibly, oblivion.

Rev. Ben Johnson is an Eastern Orthodox priest and the senior editor of the Acton Institute’s Religion & Liberty Transatlantic website. His views are his own.