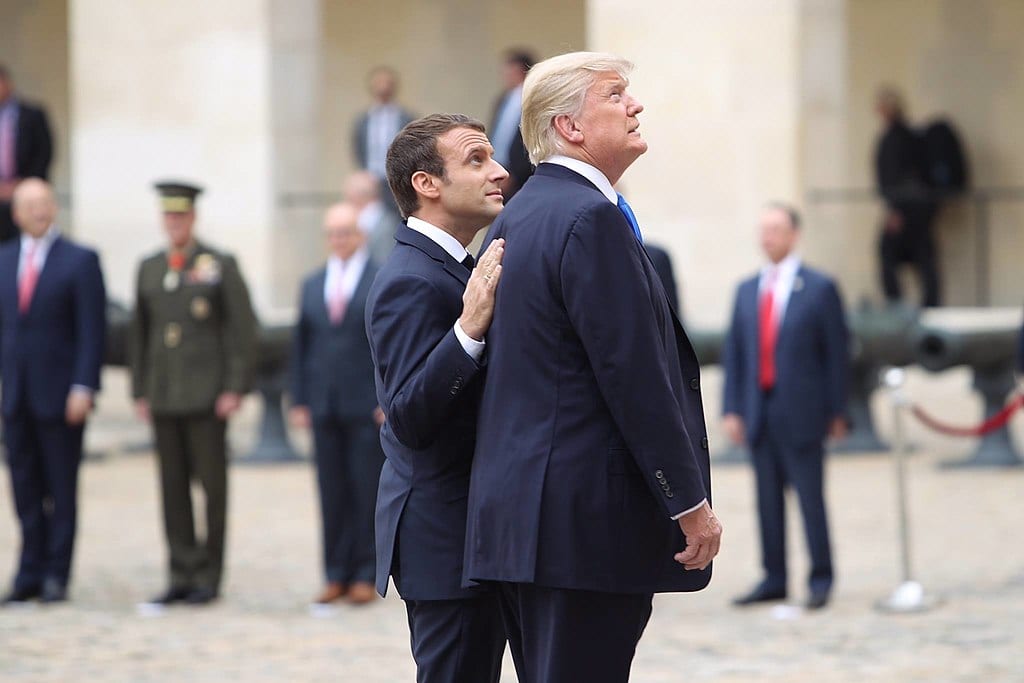 It was perfectly stupid of French President Emmanuel Macron to say nice things about Marshall Philippe Pétain as commemorative ceremonies were getting under way to mark Armistice Day. General Pétain, as he then was, commanded French forces during the year-long battle of Verdun in 1916, World War I. About a million men died, with neither side, French or German, gaining any ground.

He could have put in a word for the men who lived in trenches, with rats and lice and the fear of officers who sent them over the top knowing they would not return, or who ordered them shot for what they called mutiny, a reluctance to commit suicide. Instead he praised the “great soldier” who, twenty years later, surrendered France to the Germans and commenced, voluntarily and without prodding, the murder of about a third of France’s Jews while launching a civil war against the patriots who wanted to continue the fight against Nazism. Granted historians have judged Pétain variously, notably in view of his very long life and career; this was the most gauche moment conceivable to start a historical inquiry.

Like many callow men with power — the French president is scarcely 40 — foolishness begun seems to beget ever more of the same. Just a few weeks earlier, he had insulted most French people by telling a Danish audience the Gauls (old-time Frenchmen) are stuck in the mud and cannot adapt to change, and moreover who is French, anyway — meaning a Moroccan sex pervert or a Caribbean rapper was as French as a Norman carpenter. Then he followed up the Pétain fiasco by bringing up the topic of an anti-American European Army just as President Donald Trump was arriving in France for the same anniversary, which we call Veterans Day.

It is to be expected the Americans would be invited, seeing as how the Great War ended the way it did due to our intervention; hence Donald Trump’s obligatory presence. And maybe it was insensitive of Mr. Trump to miss his first scheduled event, at a military cemetery where lie thousands of WW I Doughboys and Marines, on a legitimate and yet somewhat weak excuse. The weather made a quick transport by helicopter impractical; but the roads and trains were available.

He could have said he was sorry for the poor planning and mentioned that he had other commemorations on his program. He was duly present for the main event in Paris yesterday, a reminder that one hundred years ago Europeans put a stop to the biggest mass suicide attempt in human history. They were at it again, 20 years later. The USA was indispensable to saving them both times. You could argue there was a third time, too, the American tenacity (even in the face of repeated insults) that saved a kind of suicide-by-despair by the free half of Europe threatened by Soviet conquest.

Regardless of how you feel about the American cemetery goof-up, it would seem the normal reaction to such discourtesy would be to urge the prez to turn on his heels and go home. But you would then reconsider and say, As long as you are here, find an occasion to say something about American boys who died not for anyone’s gratitude, but because it seemed the right thing to do, and this is so even if it seems dubious in the great sweep of historical hindsight.

At any rate, this was an American matter. By bringing up the Euro army issue as the president was landing, Mr. Macron was creating an international row. Where state visits are concerned, when you invite someone, you show him proper courtesy and respect. Mr. Macron’s way of greeting his guest was to announce Europe needs its own army because of threats from China, Russia — and the USA. It was a direct affront by a man who seems incapable of indicating where the real threats to his country are coming from.

The French president objectively was not incorrect; the decades-long idea of real Euro army remains pertinent. However, making an issue of it last week was insulting and moronic to an astonishing degree.

Mr. Macron’s gratuitous insult represents a subversion of the Atlantic alliance as grave as France’s then-foreign minister Dominique de Villepin’s treachery, when the G.W. Bush administration was trying to assemble an international coalition to beat the Islamofascists.

It is easy to say years later could’a, would’a, the fact remains that a review of the situation in 18 years ago shows that had we got together an alliance of the kind President Bush the first assembled in 1991, we would have had a much better chance to pull off the expedition, saving many thousands of American lives and, though Mr. Macron will never see this, quite possibly sparing Europe its current real and present threat, which comes neither from West nor East but from the Islamic South. Speculation is only that, but the French certainly did not help send a clear, united message to Arab enemies of the Free World, just the opposite.

History is not made of what-if’s and if-only’s. Right now the prospects for a European army, beyond the institutional staff infrastructure already in place, called the European Defense and Security Policy (which has deployed peacekeeping and policing missions to a number of trouble spots in and outside Europe) are not very high, not least because Europeanists like Mr. Macron are deliberately alienating leaders of member countries of the Union with whom they have, or pretend to have, a beef.

The case in point is Hungary’s Viktor Orban, prime minister and boss of the governing party, Fidesz, an abbreviation for Hungarian Civic Alliance. From center-left to center-right, the Europeanist mainstream has turned on Mr. Orban, and Mr. Macron was in full form again yesterday when he chose the Armistice Day commemoration in Paris to attack the Hungarian by way of denouncing “nationalism” in the name of “patriotism.” Mr. Trump, sitting nearby and already insulted by the Euro army jab, knows the code word and could readily feel targeted as well. He was too polite — or too disgusted — to take a moment to remind Mr. Macron that he had just been praising one of the top nationalists — in the sense that Mr. Macron intends the term to be understood — Philippe Petain.

There are nuances, certainly, but Mr. Macron did not linger. Nationalism is the term of choice these days for insulting and attacking democratically elected leaders who feel international institutions like the European Union or the UNRWA are abused and need fixing. Which cannot happen if members of said institutions are used as bogeymen.

When he makes use of Mr. Trump and Mr. Orban this way, Mr. Macron sows discord and distemper. He does it for personal reasons: his popularity has sunk since his surprise win a couple years ago. He does not want to admit this is to a large degree because he wants people to accept that the Europe they thought they knew is a mirage, which when it dissipates will reveal a continent they no longer recognize, right down to their neighborhoods.

That, it would seem, is why Mr. Macron seeks to distract the French people with the old snake-oil of anti-Americanism. It is, too, the basis of the conflict Mr. Macron has sought with Mr. Orban. It requires further reporting and elucidation; it is, in any case, most unfortunate that the French president, on a day that should be filled with regret and sorrow and, perchance, glimmers of hope for the future, chose to rub in ill-feelings and castigate individuals with whom he should be working for a common good — the defense of the West.