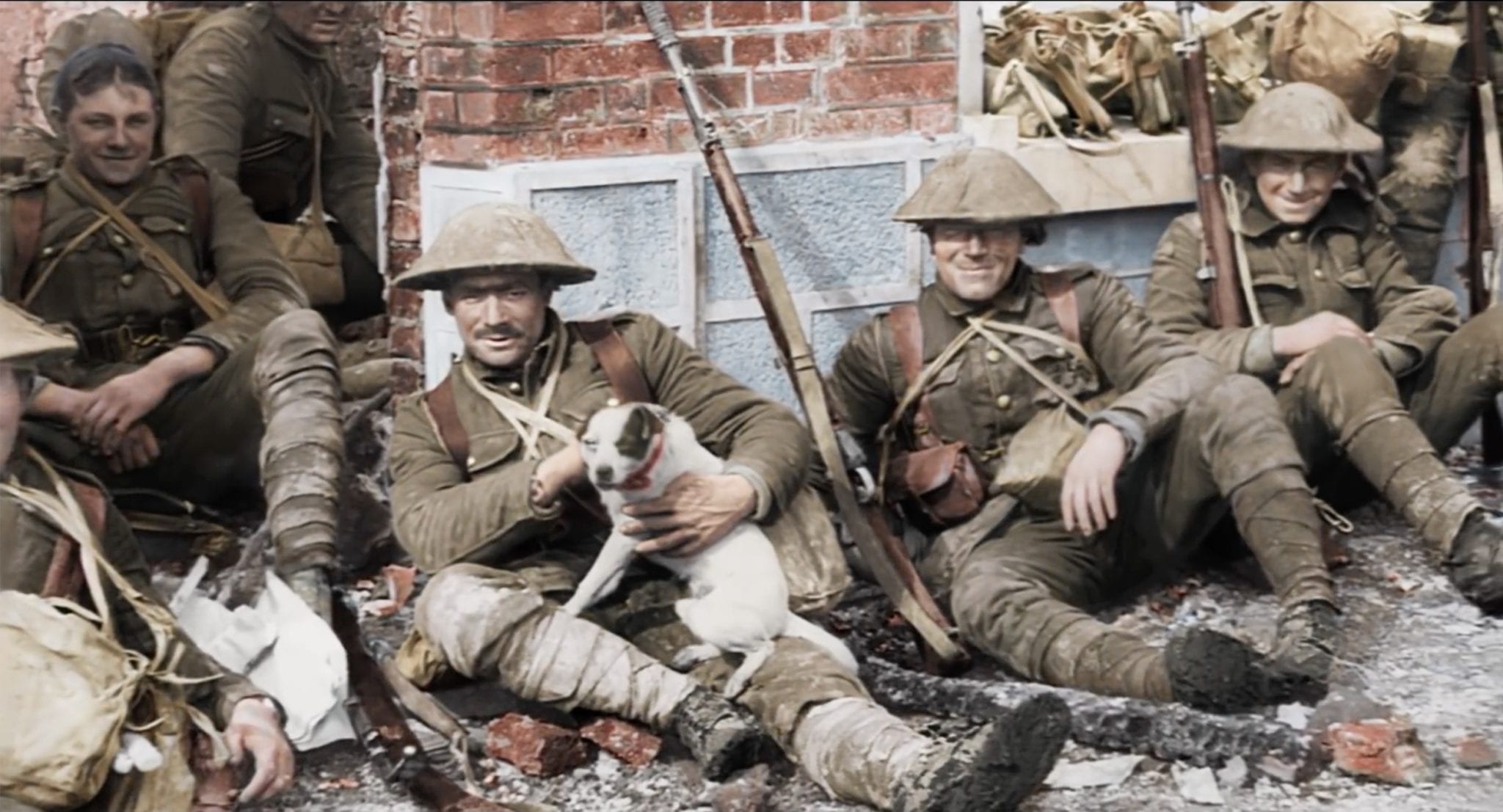 There is much to recommend the film They Shall Not Grow Old, which allows the viewer to imagine with some specificity just what life must have been like in the trenches of the Western Front, an ordeal that still haunts the general imagination and which pretty much finished the naive hopes and optimism that prevailed before the war. As the famous Hemingway passage puts it, once the War took hold:

There were many words that you could not stand to hear and finally only the names of places had dignity. Certain numbers were the same way and certain dates and these with the names of the places were all you could say and have them mean anything. Abstract words such as glory, honor, courage, or hallow were obscene beside the concrete names of villages, the numbers of roads, the names of rivers, the numbers of regiments and the dates.

In the early days of the 20th century, it was possible to believe that humanity had at last climbed out of the mud and was now walking in broad, upland fields of sunlight.

Then came 1914 and we slipped back into the mud.

The literal mud, that is, of trench warfare.

Portions of which were recorded on film, by primitive equipment and, of course, in black and white, with no sound. Technology has made it possible to make segments of that old film, archived in the Imperial War Museum, look as though it might have been recently shot. In color. The soldiers inevitably stare into the camera since this is, no doubt, the first time most have ever seen one. This does not apply to the wounded, who are beyond that kind of curiosity. And, then, there are the dead, whose wounds are visible and ugly.

But it isn’t the images of death that haunt the viewer so much as those of life. The trenches were muddy, at best. And submerged, at worst. And the water might as well have been raw sewage with some body parts added. When a man had been wet long enough, he developed “trench foot” — a euphemism for gangrene — and amputation became necessary. The images, in the film, of those rotten, diseased feet are particularly forceful.

According to the literature, men moving up to the line could smell the trenches before they could see them. The film makes this seem entirely plausible.

Then, there were the rats. And the lice.

Not to mention shell fire and gas.

The viewer sees it all, though you suspect there was footage that was not used because it was simply too much.

There is a soundtrack consisting, mostly, of the voices of men who were there, reflecting on the experience many years later. Their voices are astonishingly free of bitterness or self-pity. A recurring theme, among many of the voices, is that “it was a job that had to be done and so we went over and did it.”

You even detect a surprisingly wistful note, here and there. The film’s point of view is pretty much strictly that of the British infantry in Flanders and France, and the aging Tommys sometime seem to feel something that might be called a “nostalgia for the trench.”

The Great War was an undeniable tragedy and waste and we still live with its baleful consequences. Yet in the vast literature of that war — and now in this film — one is able to find this one hopeful element. This sense of brotherhood. This affection — even love — for one’s mates.

You had enemies of one sort to your front, lobbing gas and shell into your foul and flooded trenches, and indifferent leaders to your rear urging you on “over the top” and into the wire and machine gun fire.

And then, to your right and left were your mates.

Guy Chapman put it this way in A Passionate Prodigality, his memoir of the Great War:

The battalion is moving as one man; very strong, very steady, with a sway in the shoulders and a lilt in the feet. We are content to live in the moment, to feel the warm sun, to enjoy the strength of our bodies, and to be lulled by the rhythmical momentum with which we march.

Few had forebodings. At the halts they lay in the long wet grass and gossiped, enormously at ease. The whistle blew. They jumped for their equipment. Hump your pack and get a move on, the next hour, man, will bring you three miles nearer to your death.

Your life and your death are nothing to these fields — no more than it is to the man planning the next attack at headquarters. You are not even a pawn.

Your death will not prevent future wars, will not make the world safe for your children. Yet by your courage in tribulation, by your cheerfulness before the dirty devices of this world, you have won the love of those who have watched you.

And bless him for making it.