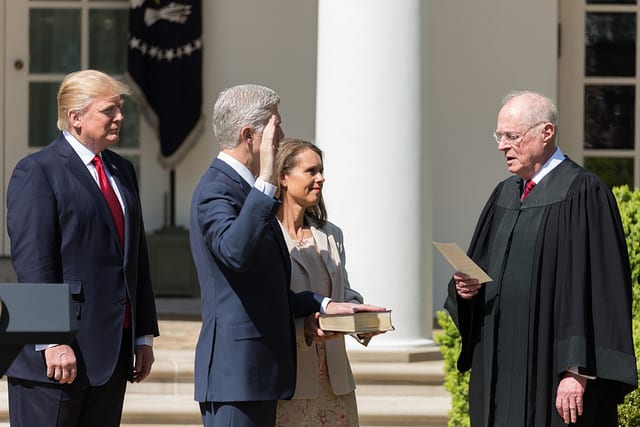 A prime example of just how trivial much of the daily noise that the mainstream media creates about President Trump is that one hardly hears a peep out of them about something that they should legitimately be concerned about: his packing the courts with conservative judges. There have been some grumblings, but they are usually lost amid the din about the thread count in Scott Pruitt’s sheets or the desperation to prove that he once talked to a Russian.

One reason for keeping the reaction subdued is obvious. The press is attempting to manufacture drama every day in an attempt to disrupt Trump’s presidency. Stories about him quietly going about his business and doing things that would make 2020 voters very happy don’t fit the narrative.

The other is that they’re probably all ready to drink themselves into oblivion knowing that the courts will no longer be filled with progressive activist judges who are all too eager to bypass the legislative process and make laws by themselves.

Still, even the MSM has to occasionally report on the presidential things that the president does just to keep up appearances. Once they’ve created a little cover, they can let their editorial board let its leftist freak flag fly:

As you have no doubt heard, rumors of your impending retirement are, for the second year in a row, echoing around Washington and across America. While you and your colleagues on the Supreme Court were listening to the final oral arguments of the term in recent days, those rumors were only growing more insistent.

How can we put this the right way? Please don’t go.

It gets worse. I’ll spare you.

CNN, of all outlets, took a more sober approach, examining reasons why Kennedy may not want to retire. Some seem realistic, but the whole thing is written as if they really, really hope he will read it.

On Thursday, an American writer for the UK Guardian accurately and honestly said it would be the “Liberals’ worst nightmare” if Trump got a second Supreme Court pick.

Camilla Taylor, the director of constitutional litigation at Lambda Legal, a national civil rights group focused on LGBT issues, said Kennedy’s previous decisions in the LGBT community’s favor “helped bring our relationships and our families out of the shadows and recognized the full humanity and citizenship of our community on the court”.

“Another conservative Trump justice would jeopardize our right to marry who we love, and also our fundamental equality under the law including protections from discrimination in housing, public accommodations, employment and education.”

Sure, just like the conservative Chief Justice jeopardized Obamacare.

What another conservative Supreme Court justice would actually do is, of course a mystery. Liberal activist judges are easy to predict on their way up the food chain. Conservatives, not so much. David Souter is the obvious example of how horribly it can all go awry for conservatives even with a Republican appointee.

At best, what we can hope for from another conservative judge is that he or she won’t be a brazen activist who is more interested in the social justice warrior hot button topic of the day than the United States Constitution.

Liberals are terrified of that kind of thing.