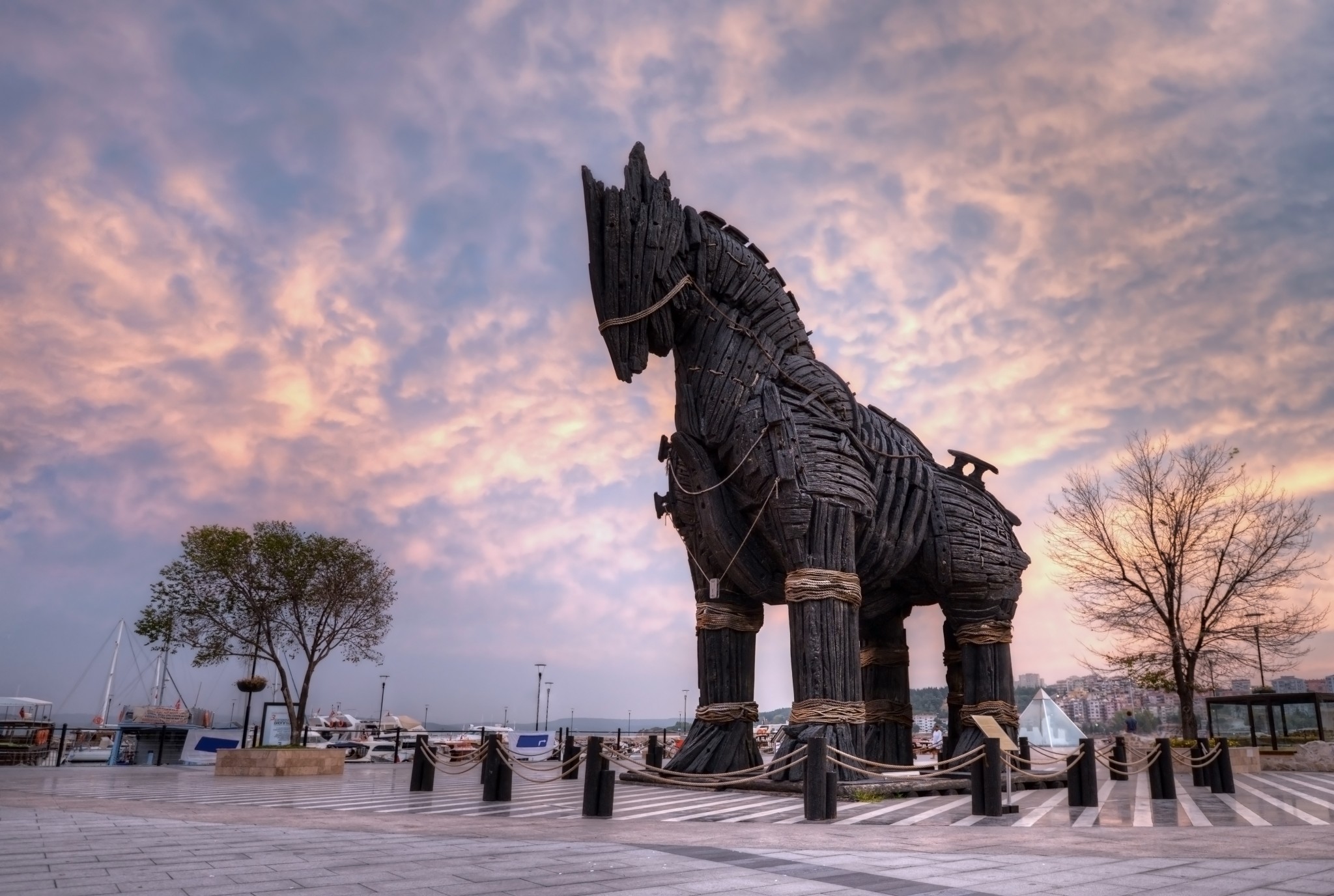 [Ty] calls shows like ours “Trojan horses” because you sneak in there and make people feel comfortable [about homosexuality in society]. And then maybe you show a little bit of an [LGFBTQIOA+] agenda. But the audience is acclimated to it at a very comfortable rate.… Obviously, our main objective is to be funny and make people laugh, and whatever comes out of it, comes out of it. But there were certain times, especially in our first season, when we didn’t have any gay writers, when it was harder. Then in our second season, we acquired … our two gay acquisitions.

It indeed is an agenda, a Trojan horse aimed at sneaking something into my guarded environment that I prefer not admitting for entrance. The thing is — and no offense meant here — but lesbian-gay-homosexual issues are not part of my agenda, OK? Are they part of yours? I am an Orthodox Jew, a rabbi also, and I don’t ask and don’t want to know. I don’t want to know what LGBTQs do behind their closed doors, and frankly I don’t care about what heterosexual marrieds do. That is personal stuff, none of my business. I do not appreciate “Trojan horses” working to make it my business.

Only last month two “Conservative lesbian rabbis tied the knot.” (There is nothing “conservative” in the denomination of “Conservative Judaism” except for a historical quirk that gave it that inapplicable name merely because it is less radical-left than “Reform Judaism.” I explain that more here.) In Israel a colleague whom I knew once to be a sensible Orthodox rabbi when he practiced in Southern California thirty years ago, stepped beyond everything that normative mainstream Orthodoxy holds dear when he ordained a fellow whose flaming  homosexuality-centric public writings, focus, and public behavior even transcend what a left-wing ordaining body could bear.

Contemporary sensitivities are such that the LGBTQIA+ subject barely can be discussed safely by faith-based Christians or Jews in the secular world from our Bible-based perspective. Right away, the LGBTQIA+ Lobby erupts, and the epithets start flying: “Homophobe! Gay basher!” Just say the word “Bible” or “Torah,” and the invective flows. Ironically, I probably have pastorally counseled and stood by more LGBTQ men and women than have 99 percent of the general population. Most of those whom I have counseled have been colleagues in secular law practice or law students whom I have taught the past two decades.

(Because most non-Jews, at least in Southern California, are not acquainted with the nuances of Orthodox Judaism, just as the typical Orthodox Jew does not know a Presbyterian from a Methodist to a Lutheran — and certainly not a Missouri Synod Lutheran from a Wisconsin Synod Lutheran — and because people like me do not dare discuss or reveal our religious views at secular work because of “cancel culture” (and also because of simple propriety and rudimentary common sense) — many in pain just naturally assume that a rabbi will be more sympathetic than will a regular law professor or big-firm litigation associate. And they are correct. Then word of mouth spreads from those whom I helpfully have counseled, giving rise to more individuals privately seeking my guidance and caring.)

I don’t like being pushed with others’ “Trojan horse” LGBTQIA+ agendas. Here are some of my much deeper concerns when it comes to the priorities that resonate with me regarding personal matters impacting people’s lives:

We live in a world of so much goodness, but life also includes aspects of hurt and pain. College professors and The Woke and “Influencers” throughout the social and cultural Left have decided that the LGBTQIA+ cause needs to be among our society’s priority issues in this generation’s fight for freedom and social justice — along with others of their prioritized causes: aborting living fetuses, funding and marching with the Marxist-founded-and-based “Black Lives Matter” organization, teaching boys they may be girls … and girls they may be boys, defunding police in America’s inner cities as crime rates surge … while securing rights for undocumented people who break into America illegally unlike the way our grandparents entered at Ellis Island.

In the face of the LGBTQIA+ “Trojan horses,” no matter the personal cost, we Bible-based Christians and Jews of faith must not allow others to coerce us to adopt their alien values and priorities. We should do (i) what is right (ii) when it is right (iii) because it is right. Not because of external social pressure to adopt causes that are not compatible with our values. No virtue-signaling here.

We are so hammered by coarse liberal Western culture that we lose sight of how alien from our values so much around us is. Did you read recently of a “music” band that staged a sold-out concert at which the lead woman “singer” invited a man onto the stage so that she could urinate on him? And a man came on the stage. And she did it. It is on YouTube — over one million views watching her micturate on him and into his mouth. Similarly, a moral degenerate who goes by the name “Cardi B” has emerged in America as a major “influencer,” did a Zoom session with Joe Biden during his 2020 presidential campaign to help him attract younger voters, and recorded a song called “WAP” that was the #1 hit-song in all of America in 2020. It debuted atop the U.S. Billboard Hot 100, with the largest opening streaming week for a song in country’s history, topping the digital, streaming, and hip hop charts, and giving Cardi B her fourth number-one single in the U.S. The “song” has been met with widespread critical acclaim, as though it were Beethoven’s Ninth Symphony composed while he was deaf. There was a time when such a person with such a “song” would have been sent to reform school or had her mouth washed out with soap. Now, instead, presidential candidates vie for her endorsement, and she is lauded as an artist with vision, an “Influencer” among college and teen-age students. This is the revulsive, repugnant alien culture of woke filth that surrounds us.

As of this writing, Mayo Clinic still lists gender dysphoria as a mental illness with symptoms and complications: “Gender dysphoria is a diagnosis listed in the Diagnostic and Statistical Manual of Mental Disorders (DSM-5), a manual published by the American Psychiatric Association to diagnose mental conditions. This term is intended to be more descriptive than the one that was previously used, gender identity disorder. The term gender dysphoria focuses on one’s discomfort as the problem, rather than identity. A diagnosis for gender dysphoria was created to help people get access to necessary health care and effective treatment.”

Sexuality is personal — and the same for “straight” heterosexuality.

Take careful note the next time you read an article or view a television show or movie or play advocating for LGBTQIA+. Indeed, literally every few months, a new dimension is added to the acrostic that began once simply with “Gay and Lesbian.” Soon, “T” and “Q” — “transsexual” and “questioning” — were added, along with “bisexual.” Then the “T” was modified also to include “transgender” and the “Q” to include “Queer.” This website is one among many that now explains for newcomers and outsiders what else has been added to the acrostic:

We still must be respectful of all people. Never use derogatory language, certainly no epithets. Know that many in our orbits may have a close relative or coworker or neighbor or acquaintance who identifies among the LGBTQIA+ population. Our plates always will be full with so many other more urgent causes who deserve so much more of our focus and time … and who lack the backing of Broadway, Hollywood, and the Left media.

Not every cause is our cause. The right of women to drivers’ licenses in Saudi Arabia is a good issue, but not ours. Political freedom in Venezuela, another compelling issue, does not draw us away from our daily thoughts. I care more about freedoms being denied in Hong Kong or in the heart of China, about LeBron James and the NBA selling out oppressed Uighurs, about Hamas terrorism stemming from Gaza, the Hezbollah build-up for war in Lebanon, and Iran preparing to engage in nuclear war. I care about record crime surges in our inner cities, the lives of police officers and their loved ones who pray they return home alive every night, and artificial racial tensions drummed up with Critical Race Theory to divide and destroy our country. I care more about the brainwashing of kids in our public schools, where they are taught to pick non-binary pronouns and to consider changing genders without telling their parents.

In such a world, the LGBTQIA+ cause is not my cause. This law school exemplifies the way that Leftists go off the charts and try to impose their woke causes on people around them. No one will shove his or her cause célèbre down my throat. Guard your throat, too.