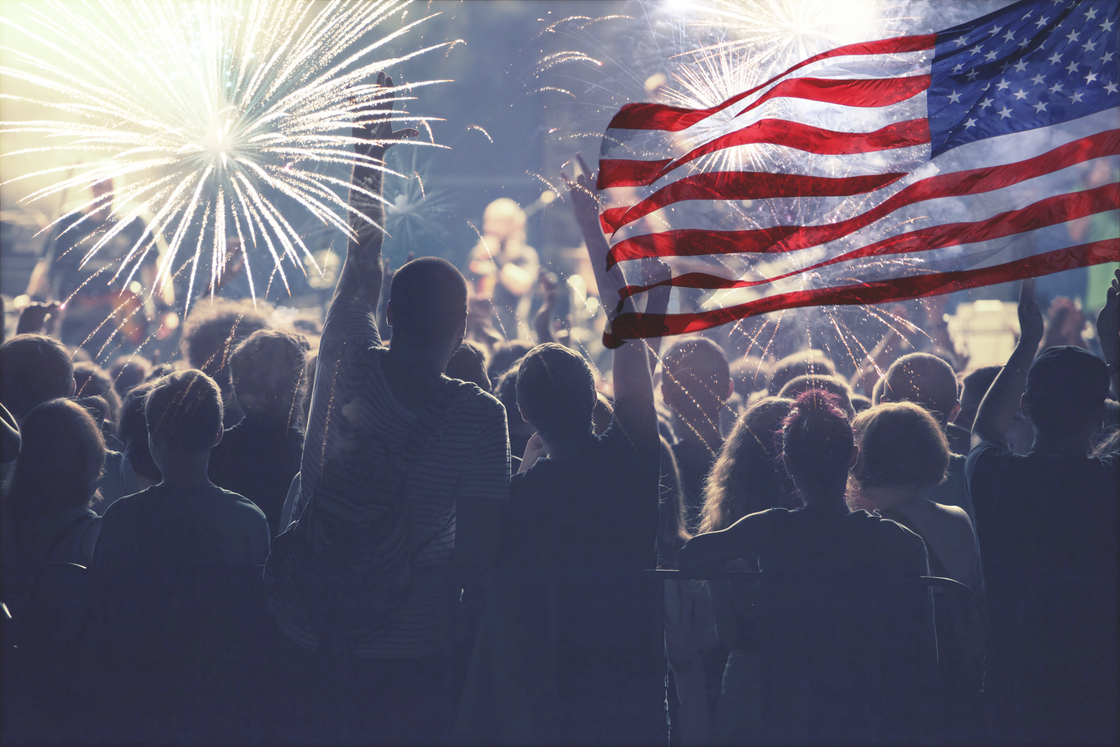 Proud Americans will be donning shirts, hats, socks, and masks patterned after the stars and stripes this Independence Day to celebrate our great nation.

But disaffected liberals will be protesting America’s supposedly inherent hatred and oppression by taking virtue-signaling to a new level: with anti-Fourth of July T-shirts. It’s just another leftist attempt at using this year’s holiday to trash America. 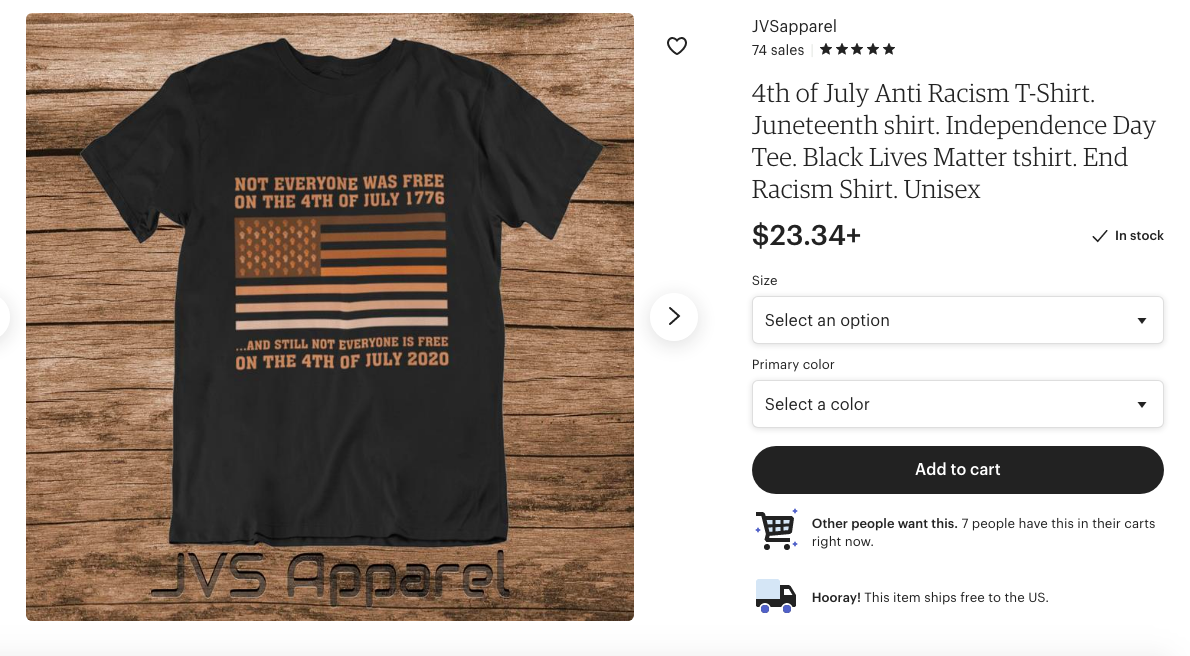 Another shirt suggests foregoing the holiday entirely: “Skip the Fourth of July,” reads the description underneath a picture of a marijuana plant. “Just get high,” the shirt advises instead.

Other shirts on sale for this year’s holiday, mostly sold by enterprising leftist individuals, include phrases like: “Modern Dystopia Est. 1776,” “Juneteenth is my Independence Day,” and “July 4th didn’t set me free.” 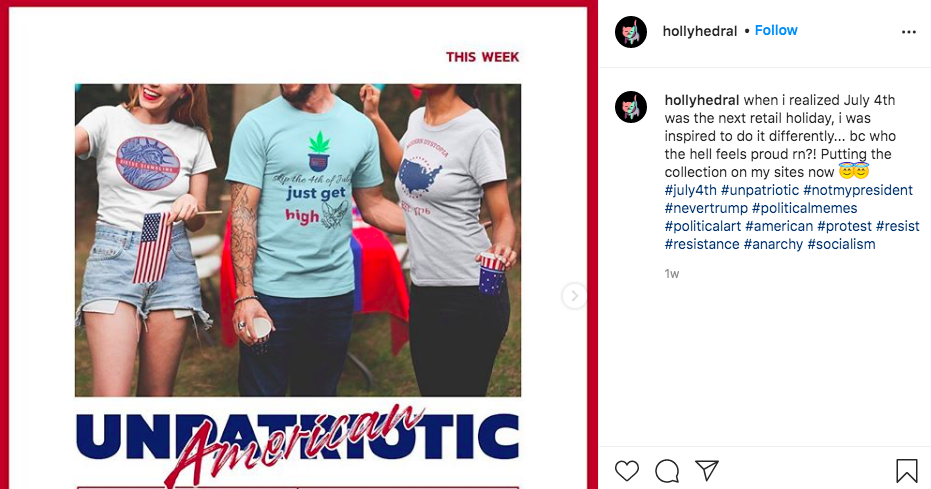 One company selling the shirts, Hollyhedral, tells customers, “Why pretend like you’re proud of where we are at when your standards are higher? America’s never been great but we can be if we stop lying to ourselves about history.”

“It’s difficult feeling proud and patriotic with the state of the United States,” the company said.

The shirts are just another example of the contempt for America plaguing this year’s Independence Day celebrations.

Elected leaders have attempted to stop Fourth of July festivities in the name of the coronavirus while at the same time propping up Black Lives Matter protests. Washington D.C.’s Mayor Muriel Bowser, for instance, spoke in the thick of the crowd at a Black Lives Matter protest on June 6, but tried to cancel the Fourth of July celebration planned to take place on the National Mall. “We’ve communicated to [the Department of Interior],” she said of the celebration, “that we do not think this is in keeping with the best CDC and Department of Health guidance.”

Writers at the New York Times are complaining about Mount Rushmore, where President Donald Trump will speak this Fourth. The presidents depicted in the sculpture — Washington, Jefferson, Theodore Roosevelt, and Lincoln — all have racist histories, they wrote, and Mount Rushmore stands on stolen land.

Activists have planned “Forget the Fourth” events to take place across Atlanta. “When you look at the history of July 4,” said Scotty Smart, the activist leading the events, “we weren’t necessarily free, so how can we celebrate our independence?” The events, however, were canceled after Smart fell ill, possibly with the coronavirus.

Nikole Hannah-Jones of the New York Times is at the center of this movement, which aims to replace pride in our founding ideals of liberty and equality with shame at our country’s allegedly inherent degeneracy. She recently tweeted that it “would be an honor” for the riots following the death of George Floyd and the toppling of statues of Founding Fathers to be called the “1619 Riots” after her “1619 Project” with the New York Times.

The 1619 Project’s very name seeks to move the founding of our nation’s history from the approval of the Declaration of Independence to the start of slavery in North America.

According to the 1619 Project, America is not a story of great ideals accompanied by many failures, but a country that at its core is founded upon the enslavement of black people. That thinking is what inspires Americans to no longer celebrate their day of independence with a patriotic shirt and a parade, but rather to use the day to argue America is intrinsically evil.

Abolitionist and former slave Frederick Douglass offers an alternative to Hannah-Jones’ framing with his speech, given July 5, 1852, to the Rochester Ladies’ Anti-Slavery Society, “What to the Slave is the Fourth July?”

Instead of arguing America is inherently flawed, like Hannah-Jones, Douglass argued that there was a gap between the great ideals of the United States and the reality of how those ideals were lived out.

“The principles contained in [the Declaration of Independence] are saving principles,” said Douglass. “Stand by those principles, be true to them on all occasions, in all places, against all foes, and at whatever cost.”

But Douglass, who had been enslaved, said that he was not included in the Fourth of July because the ideals promised in the Declaration were not extended to him as a result of the evils of slavery, racism, and oppression.

“The rich inheritance of justice, liberty, prosperity and independence, bequeathed by your fathers,” he said, “is shared by you, not by me.”

To Douglass, the promise of America could be brought to fruition by grounding ourselves upon the Fourth of July instead of basing our nation upon America’s evils.

“The 4th of July is the first great fact in your nation’s history,” said Douglass, “the very ring-bolt in the chain of your yet undeveloped destiny.”

Over 150 years after its founding, America is looking away from its founding and towards its faults. No longer fixated on an ideal to build towards, we are unable to most past our country’s history of slavery. The slogans on T-shirts that criticize America on the celebration of its independence serve to divide us rather than ground us the history we share, and struggle through together.