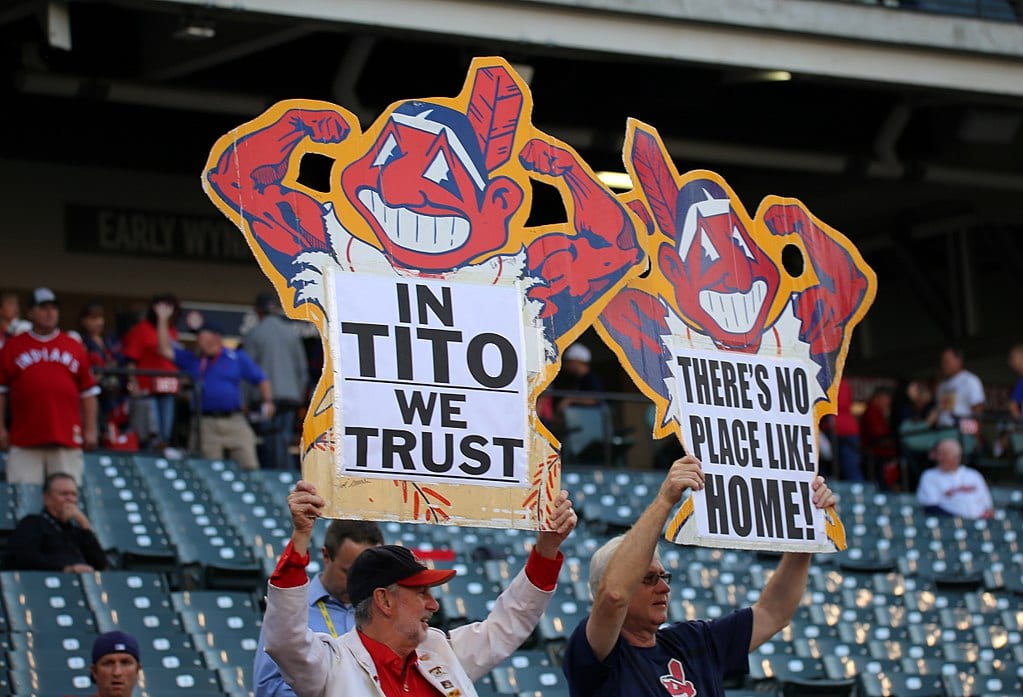 The forces of left-wing cultural intolerance have won another one. The ownership of the Cleveland Indians has finally given in to pressure from left social justice warriors at Major League Baseball, led by Commissioner Rob Manfred, and have agreed to drop Chief Wahoo from the team’s uniforms and promotional literature beginning in 2019.

Manfred has been pressuring Indians owner Paul Dolan to banish the smiling, cheerful, and totally harmless Wahoo since Manfred, a Harvard Law grad and corporate drone, was appointed Commissioner of Baseball, for reasons that remain unclear, in January of 2015. (Were there no baseball people available?) Dolan resisted for a couple of years, but finally caved, as it seems almost everyone eventually does these days in the face of PC pressure.

After the capitulation, Manfred put out this bromide: “Major League baseball is committed to building a culture of diversity and inclusion throughout the game. Over the past year we encouraged dialogue with the Indians organization about the club’s use of the Chief Wahoo logo. [Translation to plain English: We badgered them.] During our constructive conversations [see above re badgering] Paul Dolan made clear that there are fans who have a longstanding attachment to the logo and its place in the history of the team.”

Indeed, Wahoo has had generations of fans. (Obviously MLB inclusion doesn’t include these fans.) This charming little fellow has decorated Indians’ caps and uniforms since Hiawatha was a pup. Many Cleveland baseball fans, with nary a racist bone in their bodies, hold Wahoo in high regard and will hate to see him gone. These are the people who lose when Wahoo is shown the door. And who exactly benefits? Don’t say American Indians, because survey after survey of real Indians shows a large majority of the folks the hell-raisers claim to be advocating in the name of are not opposed to Wahoo, or to other Indian-themed mascots and logos. A clear majority either don’t care about the issue or like the logos and mascots.

A question the media have not asked on this issue (and don’t expect them to) is this: Is the life of any American Indian made even the tiniest bit better because Cleveland Indians players will henceforth and hereafter wear that charmless and boring block C on their uniform caps instead of the cheerful and lively Wahoo? The question answers itself.

Manfred, after his oh-so-slight bow to Wahoo’s fans, added: “Nonetheless the club ultimately agreed with my position that the logo is no longer appropriate for on-field use in Major League Baseball, and I appreciate Mr. Dolan’s acknowledgment that removing it from the on-field uniform by the start of the 2019 season is the right course.” (Translation to plain English: I finally wore the sumbitch down.)

No longer appropriate, according to whom? Left-wing geeks and chromic malcontents, that’s whom.

Dolan’s statement after giving up the fight is kind of squirm-inducing. Uncomfortable to read because he’s trying hard not to sound defeated, not to be so obviously put in his place: “We have consistently maintained that we are cognizant and sensitive to both sides of the discussion. While we recognize many of our fans have a long-standing attachment to Chief Wahoo, I’m ultimately in agreement with Commissioner Manfred’s desire to remove the logo from our uniforms in 2019.”

Perhaps not a total grovel, but one can be forgiven if one picks up a faint hint of the “confessions” at those Soviet show trials in the thirties. Dolan may be “cognizant and sensitive to both sides of the discussion.” But in the contemporary corporate and politically charged atmosphere of all Major League sports, only the left side of any discussion counts, even when, in almost all cases, the left side represents a small minority. Those baying for Wahoo’s scalp are made up of a tiny sliver of dedicated leftists, professional Indians, multi-purpose indignatos, identity politics red-hots, and sundry other disturbers of the peace. But no matter. Fanatics always punch above their weight in our post-everything culture. If those fanatics are on the left, of course.

It’s hard to place exactly when Major league sports took a wrong turn, even harder to say why. I can easily remember when sports commissioners thought it was their sole function to put on ball games for the entertainment of the fans of their sport and to make a buck or two doing so. Now we can’t seem to kick-off, tip off, or deliver the first pitch until every last item of left social etiquette has been exquisitely observed. Men must have access to the women’s room, players may diss the flag and the country and be praised for it. Sports leagues spend millions on crackpot “social justice” TV ads. We are all diminished by this insanity, more of which we were subjected to yesterday by big Chief Rob Manfred.