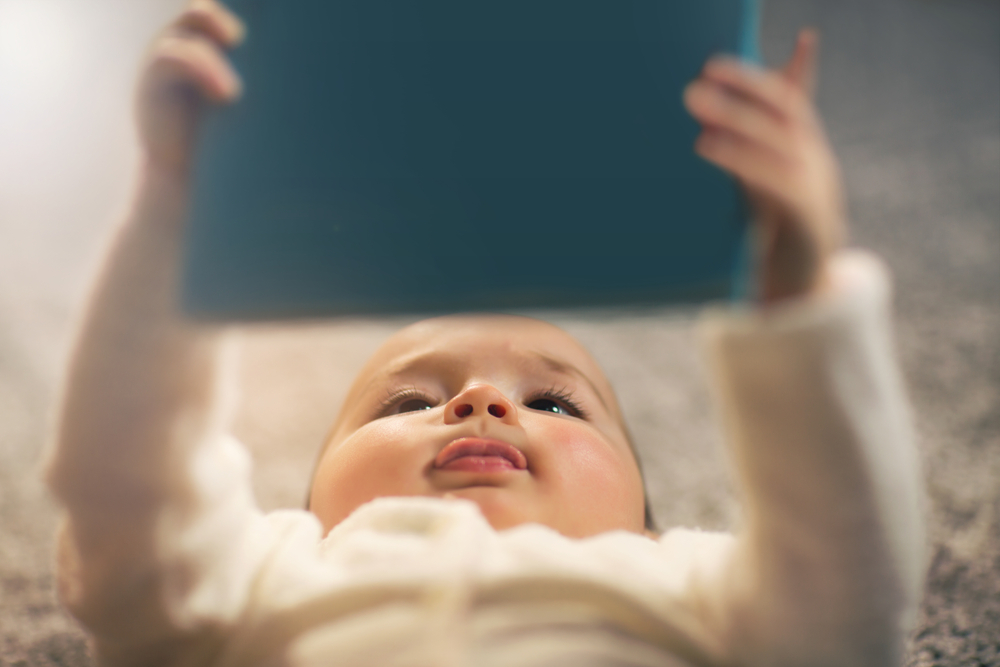 Marigold and Rose: A Fiction
By Louise Glück
(Farrar, Straus and Giroux, 64 pages, $22)

I’m not alone in responding this way, and this only increased my terror.

So I got the app. I downloaded Ovia Pregnancy Tracker and scrolled through all the fruits and small animals that matched the size of my baby. The first was a blueberry, about seven weeks. Early — I hadn’t missed much.

I checked every day. Until months after my daughter was born and I had graduated to the Ovia Parenting app, I read every article and listicle — some helpful (potential allergens to introduce to your baby), some not (how to talk with the folks about your gender-neutral parenting style).

I wish I could say that her birth was a catalyst that parted me from parenting by phone. But it didn’t, and it doesn’t for many nervous young moms. And that’s been the case for decades: parenting by proxy was made a famous (and lucrative) part of maternal culture by “pregnancy bibles,” like What to Expect When You’re Expecting and its many spin-offs. These books are solid long-term sellers; even in the post-pandemic era of paper shortages and slashed publishing lists, the increasingly stingy Knopf put out Penelope Leach’s hefty Your Baby & Child: The Classic Childcare Guide, Revised and Updated this fall.

There will be those who read it religiously. And the advice there will be perfectly reasonable, as useless as it is useful for parents who want to fend off all dangers and soothe all anxieties. Leach, a research psychologist who published the first edition of the guide in 1977, is revered as a “comforting voice” with a perspective that is “wise, empathic, and sensible.”

Unlike the apps, these book blurbs assure me, Leach will studiously avoid anything that sniffs of a parenting fad. To take one example trending among millennial moms: “baby-led weaning” — the idea that infants don’t need puréed “baby food” but should just eat what their family eats when they’re ready — receives no mention in Your Baby & Child. Its section on introducing solid foods arbitrates the great purée–versus–whole foods debate by advocating “balance.” After all, the sensible Leach presumes, a nonzero number of people reading the book must be presumed to have only yesterday’s Domino’s in the refrigerator. Being sensible can come at the expense of being helpful.

Reading baby bibles didn’t satisfy my need for reassurance as a young mom. They’re too solitary for those who crave the mass validation of internet parenting. For that, there’s Instagram. It hosts pages and pages of baby-led weaning accounts, managed by doctors, moms, chefs, and social media influencers. Contra Leach, to me it seemed everybody was in on the trend. The pediatrician-run @solidstarts has two million followers; @rebeccawilsonfood has over five hundred thousand. There are more.

Your Baby & Child claims on its cover, “More than 2 million copies sold.” It remains to be seen who, in 2022, comes out ahead in the end: the glossy, ephemeral infographic posters or the experts whose names exude authority from the bookshelf. But what’s interesting in the age of Google search, apps, and algorithms is that niches enforce and advocate for themselves: how many anti-baby-led weaning accounts will you find by searching the term on Instagram? Depending on parenting personality, trends can easily become dogma, no matter how studiously the establishment ignores them.

Online, you can find an expert who will tell you anything. So, baby-led weaning: why not give it a try?

This feedback loop taunted me as, a few months later, I watched my daughter refuse sliced apples but devour applesauce. Steamed carrots, no. Blended, yes. We were going to have to purée.

My baby seemed like a natural to lead her own weaning. She had a healthy appetite. She was bright and endlessly curious. Guilty and frustrated, I scrolled: meal plans and eating schedules promised to introduce a variety of textures, then told me that on the other hand I needed neither schedules nor plans — you do you, and, also, here are three more articles with three more baby menus that just might do the trick.

In the end, we made friends with the food processor — a move the internet and parenting bibles also validated. But the impression that I was always reading the wrong sources and asking the wrong questions persisted. Online, I was suspicious of specific advice — dogma! — and yet unconvinced by encouragement to relax and follow my instincts.

This nagging sense that there was something I wasn’t factoring in, someone whose opinion I hadn’t considered, only grew stronger as I continued researching. It wasn’t the facts I was missing; this wasn’t the anxiety of ignorance. It had more to do with the time and effort it takes to build trust in ourselves as these new creatures, mother and child, learn to communicate with each other.

A story to illustrate: One afternoon, as the purées were slowly being phased out by solids, I was debating over choosing more applesauce or more yogurt for her snack, weighing protein and carbs, and she slipped into the fridge and grabbed a tomato from the bottom shelf. Seeing the mischievous glint in her eyes, I laughed and said, “Go for it”; she’d just picked out the tomato chunks in her pasta the week before.

She bit down, bit again, brought me the fruit to slice into the tough skin, and ate the whole thing, sitting on the kitchen floor.

Okay, I thought. Message received: There is no program. We are not following any schedule or philosophy. That’s the sort of freedom that no one, expert or influencer, could give me. Only my girl.

But my feeling of inadequacy didn’t disappear overnight, and it still hasn’t. Instead, my daughter and I are slowly learning to read.

What we read is each other. She doesn’t yet talk, but we do talk — without words, she tells me what she needs with admirable clarity and concision.

The ineffable language of those who can’t yet speak is what animates Louise Glück in her new “fiction,” Marigold and Rose, where a pair of twins tell the story of their first year. Glück, a Nobel-winning poet, by reputation is more likely to leave one’s hair singed when she turns to domestic matters than to daydream about baby’s first words. “I hate them as I hate sex” is a classic Glück line from “Mock Orange,” whose title is a metaphor for the poem’s view of romantic love. It goes on, “We were made fools of.” Another of her famous poems is “The Drowned Children.”

So, I approached Marigold and Rose with trepidation. But the line drawing on the cover was sweet, and I was exhausted from chasing my one-year-old, and the book was fifty pages long.

“Marigold was writing a book,” Glück opens. “That she couldn’t read was an impediment. Nevertheless, the book was forming in her head. The words would come later.”

Marigold is the introspective twin. Rose is the social one. Taking turns, in fits and starts and with endearing misunderstandings — Marigold’s struggle to understand the meaning of “once upon a time,” attempts to hear Rose’s thoughts from outside her head, and great confusion over what it means that they “are one,” meaning one year old — Marigold and Rose compose (in their way) the epic of their lives. They share their first memories of climbing stairs and meeting rabbits (or “bunnies,” a diminutive from their children’s books that they note with the sweet seriousness of those just getting wise to “baby talk”) to their first birthday party.

What’s obvious here is also profound: the story is narrated from the perspective of two prelinguistic infants. This is attractive to a poet first as a challenge of language, primarily of voice and tone: how to channel the momentous precocity and pride inherent in discovering words or the mysterious occupations of one’s parents? So, when Father comes home from work, “There was always a festival.” That last, unexpected word in the mouth of an infant is just right, as is this gloss on a baby’s facial expression when a party becomes overstimulating: “Chaos and imprecision.” And here is the adorable dignity of simple categorical understandings and misunderstandings: “[P]eople they didn’t know were touching them and calling them lambs and chickens though it was perfectly obvious they were human babies.”

Marigold and Rose give Glück more than language lessons. Attention to the minds of infants reveals not just the ABCs of communication but also its heart: the ways familial sympathy — instinctual or “animal” connection — becomes conscious understanding.

And love. Rose intuits that something about this storytelling is essential to Marigold’s understanding of her place in their family, and she makes mute or telepathic suggestions for the book’s ending. After the party, Marigold lies awake in her crib “trying to make it real.” She goes on: “[N]othing could stop her, even words couldn’t stop her. All night she wrote. She wrote and wrote and wrote and wrote. The end was the morning.”

And the family’s story begins again, or continues. Marigold and Rose, speaking or not speaking, writing or not writing, share their story by the attention they give to one another. Not the successful writing of the story, but the sharing of it, is transformative. This is how poets and parents learn to read.

Here, getting the facts right is not the end or perhaps even a requirement for the powerful revelations that define childhood: “Rose was staring at her new feet which had purple bows in the middle of them. Rose was very pleased. They were not feet anymore. They were shoes.”

Soon after reading Marigold and Rose, I bought my daughter her first pair of sandals, and I did not think to ask Google if it was appropriate to do so. It was simple: she kept waving from her stroller at the children in the park. It was time. We knew.

Hannah Rowan is managing editor of The American Spectator.