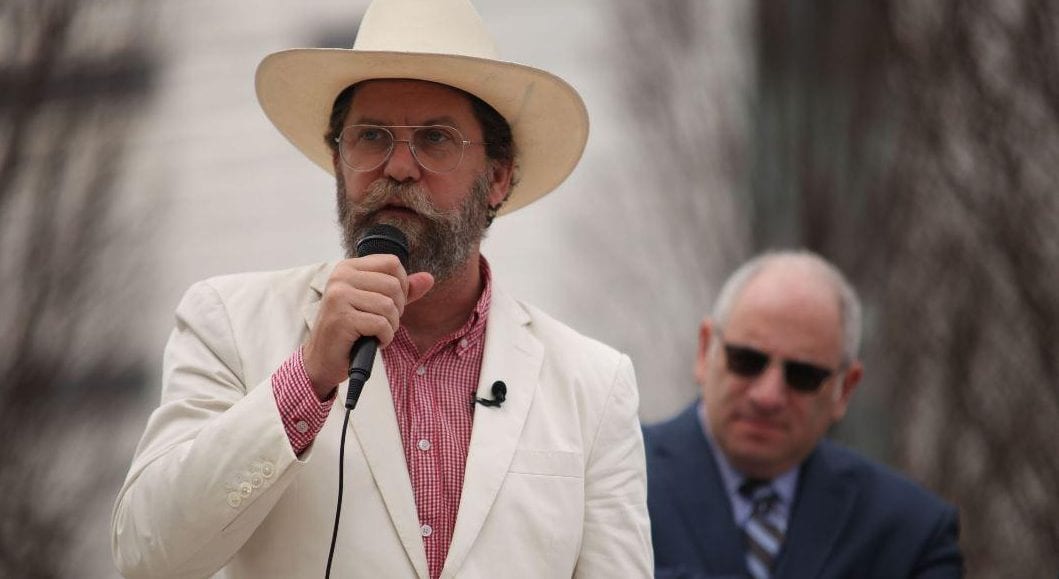 When he decided in 2016 to create a club for his supporters, Gavin McInnes says he had in mind something fun — like the “Loyal Order of Water Buffalo” lodge to which Fred Flintstone and Barney Rubble belonged in the old cartoon series. A humorist-turned-political commentator whose YouTube channel has nearly 270,000 subscribers, McInnes certainly didn’t intend the Proud Boys to be a “hate group,” but that’s what the Southern Poverty Law Center labeled them, and a federal lawsuit McInnes filed this week accuses the Alabama-based SPLC of “tortious interference with prospective economic advantage, defamation, and false light invasion of privacy.”

The 61-page complaint in the case details how the SPLC began targeting McInnes in 2017 and continued upping its characterization of him as an “extremist” and labeling the Proud Boys a dangerous “white nationalist” group until they succeeded in getting McInnes banned from Twitter, Facebook, and Instagram last year. Citing numerous articles on the SPLC website as “false and defamatory,” the complaint accuses the tax-exempt left-wing group of using the “hate” label in a deliberate campaign to “destroy” its chosen ideological enemies. It seems the SPLC considers more or less anyone who supports President Trump to be a “far-right” extremist.

“I made it fun to love Trump, and I’m effective — that scares the Left,” McInnes said in a telephone interview this week, explaining his opinion of how a comedian ended up being branded with what he calls the “Scarlet Letter” of the SPLC’s hate label. Employing a metaphor made popular by the 1999 film The Matrix, McInnes says, “I’m red-pilling an entire generation.”

Indeed, the trajectory of McInnes’s career from Generation X “hipster” humorist to conservative commentator reflects how much politics has changed in the past decade, with the GOP Establishment being upstaged by a surge of grassroots populism that elected Trump in 2016. The younger generation to whom McInnes provides the proverbial “red pill” are contemptuous of the polite go-along-to-get-along Republicans who act as a “controlled opposition” to the socialists and identity-politics militants who now set the agenda of Democrat Party. Trump’s outspoken style, which shocks many old-school Republicans and offends the media’s liberal sensitivities, doesn’t bother young men raised on irreverent comedy, heavy metal and gangsta rap music, and accustomed to free-wheeling Internet forums like Reddit and 4chan. McInnes has for years deployed his madcap sense of humor to mock political correctness. In 2014, for example, he published an over-the-top satirical takedown of transgender ideology: “We’re all transphobic. We aren’t blind.… These aren’t women trapped in a man’s body. They are nuts trapped in a crazy person’s body.” McInnes’s article at Thought Catalog drew so many complaints that it now comes with a gigantic disclaimer and readers must click “continue” to find it on the site.

Well, mocking transgender ideology is also “hate,” according to the SPLC, which quoted McInnes’s 2014 Thought Catalog article in its profile of the Proud Boys as an “extremist group.” When you strip away the guilt-by-association smears and other propaganda tactics employed by the SPLC to paint McInnes as a scary “extremist,” however, most of it boils down to his habit of making jokes about things the SPLC doesn’t think Americans should be allowed to joke about. And then there is the matter of violence: The Proud Boys on several occasions acted as volunteer security squads at pro-Trump events attacked by so-called “Antifa” (anti-fascist) mobs of leftists, but McInnes says, “We don’t go looking for violence.”

Instead, Antifa violence went looking for McInnes — 11 people were arrested after the left-wing mob attacked a February 2017 New York University event where he spoke to College Republicans. In October 2018, Antifa vandalized the New York Metropolitan Republican Club in advance of a speech by McInnes. After that event, a street brawl broke out between a group of Proud Boys and masked Antifa protesters, resulting in a total of 12 arrests (nine Proud Boys and three Antifa).

“I don’t think people understand how violent the Left is,” McInnes says, describing incidents in which Antifa hurled glass bottles of urine at him, and when a left-wing mob of hundreds actually threw feces at people attending a D.C. event celebrating Trump’s inauguration in January 2017. The feelings of rage that gripped Democrats after Hillary Clinton’s 2016 defeat were used to justify these acts of violence against Trump supporters, and McInnes says Proud Boys were smeared by the liberal media’s coverage that distorted the reality of what happened in such incidents: “Hit piece after hit piece, with lie after lie.”

Beyond the specifics of McInnes’s lawsuit, many observers have in recent years complained that the SPLC’s definition of “hate” has become infinitely elastic, expanding to include mainstream conservative groups that have nothing in common with the violent Klan or neo-Nazi groups which most people think of when they see the “extremist” label. Most notoriously, in 2012, a homosexual man named Floyd Lee Corkins shot a security guard at the D.C. offices of the Family Research Council (FRC) and confessed to police that his planned terrorist attack on the religious conservative organization had been inspired by the SPLC’s “hate group” designation. Corkins was sentenced to 25 years in federal prison, but the FRC continues to be listed as an “anti-LGBT extremist group” by the SPLC.

Last August, Attorney General Jeff Sessions spoke at an event sponsored by the Alliance Defending Freedom (ADF) and announced the Justice Department would no longer partner with the SPLC (as it had during the Obama administration) because of the SPLC’s defamation of conservative groups. “When I spoke to ADF [in 2017], I learned that the Southern Poverty Law Center had classified ADF as a ‘hate group’ [and] many in the media simply parroted it as fact,” Sessions said. “They have used this designation as a weapon and they have wielded it against conservative organizations that refuse to accept their orthodoxy and choose instead to speak their conscience. They use it to bully and intimidate groups like yours which fight for the religious freedom, the civil rights, and the constitutional rights of others.” And McInnes’s lawsuit is at least the fourth such legal action filed against the SPLC recently.

Last June, SPLC paid a $3.3 million settlement and apologized to British Muslim Maajid Nawaz, in response to his threat of a lawsuit after being included on the group’s list of “anti-Muslim extremists.” Nawaz said the SPLC, once famous for fighting the KKK, “have become the monster they have claimed they wanted to defeat.” In December, Baltimore attorney Glen Keith Allen sued the SPLC, accusing it of illegally purchasing stolen documents “with the intent of getting him fired by the city of Baltimore and permanently destroying his future prospects.” Allen’s lawsuit accuses the SPLC of fostering an “East Europe Communist thought-crime surveillance mentality.” Last month, the D.C.-based Center for Immigration Studies (CIS) sued SPLC President Richard Cohen and the group’s chief “hate” researcher Heidi Beirich under the federal Racketeer Influenced and Corrupt Organizations Act (RICO) statute. In announcing their lawsuit, CIS said: “Cohen and Beirich have been carrying out their scheme to destroy CIS through the SPLC ‘enterprise’ for two years and will not stop without judicial intervention.”

After SPLC settled with Nawaz, Tyler O’Neil of PJMedia reported that “no fewer than 60 organizations branded ‘hate groups’ or otherwise attacked by the Southern Poverty Law Center (SPLC) are considering legal action against the left-wing smear factory.” O’Neil quoted Mat Staver, founder and chairman of Liberty Counsel, as saying that “a number of organizations have been considering filing lawsuits against the SPLC, because they have been doing to a lot of organizations exactly what they did to Maajid Nawaz.” Orlando-based Liberty Counsel is one of 51 “anti-LGBT hate groups,” according to the SPLC, which lists several Baptist churches as well as long-established Christian organizations like D. James Kennedy Ministries. “The SPLC promotes false propaganda, demonizes and labels groups they disagree with,” Staver told O’Neil, “and that labeling has economic as well as physical consequences.”

Of course, the SPLC has deep pockets — an endowment estimated at nearly $320 million — and its response to McInnes’s lawsuit was an expression of boastful arrogance. “We’ve just been sued by the founder of a hate group — for doing our job,” Cohen said in an SPLC fundraising email sent Monday evening. “McInnes’ suit against us has no merit. The fact that he’s upset tells us that we’re doing our job exposing hate and extremism.” Remarkably, while the SPLC has sought to silence conservatives by “deplatforming” and defunding them, as McInnes’s lawsuit explains in some detail, in his Monday email Cohen accused McInnes of “trying to deny us our First Amendment rights. We’ve been sued by multiple hate groups who are angry that we’ve exposed their hateful rhetoric.”

Having thus doubled-down in defense of its practice of labeling conservatives “hate groups,” the SPLC appears quite as confident that it can defeat Gavin McInnes as a certain Philistine giant was once certain he could defeat a Hebrew shepherd boy. Unlike the biblical David, however, McInnes is not fighting alone. His legal team includes noted First Amendment attorney Ron Coleman, who said that the lawsuit “challenging the use of deplatforming and defunding to privately censor speech” has wider implications: “If we can’t stop this phenomenon now, the First Amendment will be rendered meaningless as dissent is silenced through private actors such as SPLC and its allies.”

The website DefendGavin.com has already raised more than $50,000 from 1,200 online donors to help fund McInnes’s legal fight against the SPLC. Many of his supporters understand what’s at stake in this case. It’s not just McInnes and the Proud Boys who are being targeted by this kind of “hate” label. It’s the nearly 63 million Americans who voted for Trump. The SPLC and its allies in the liberal media seem intent on making it illegal to disagree with them. Perhaps all Gavin McInnes wanted when he started the Proud Boys was to be Grand Poobah of the Loyal Order of Water Buffalo, but now the bearded hipster may become an accidental hero in the fight to defend American liberty. Fred Flintstone could not be reached for comment.

Robert Stacy McCain
Follow Their Stories:
View More
Robert Stacy McCain is the author of Sex Trouble: Essays on Radical Feminism and the War Against Human Nature. He blogs at TheOtherMcCain.com.
Most Popular
1
Political Hay
McConnell Gets Burned After Trying to Compromise With Democrats on Electoral Count Act
by Ali Alexander