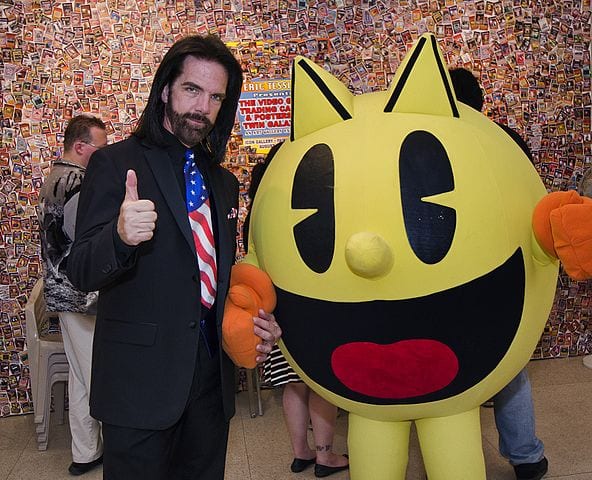 The memorable Mitchell, a bearded Floridian who wears patriotic ties in the front and a mullet as dated as the games he plays in the back, co-starred in the even more memorable 2007 documentary, King of Kong: A Fistful of Quarters. Therein, Billy Mitchell’s penchant for speaking about Billy Mitchell in the third person, devotion to hair perfection, and begrudging admission “I’m not God” projected a character that often morphed into caricature.

Some gamers, scarred by unpleasant interactions with people like Mitchell, hated him. Others, scarred by portrayals casting gamers as spazzes and dorks, loved the charismatic Mitchell for blowing up the stereotype.

Amateur sleuths claim that the polarizing figure used an emulator instead of the real arcade game to achieve his records. This enables a player to repeat bungled stages to attain perfection or near perfection before moving on to the next level. Their evidence of Mitchell allegedly using an emulator includes strange gaps in the tapes of the record-setting games, the materialization of screen patterns at the beginnings of stages that do not resemble the bona fide game, and the absence of sound on the tapes, which suggests the use of an emulator because of its inability to faithfully emulate sound. Twin Galaxies notes that among the evidence compiled, “Most notable was the 3rd party (Carlos Pinerio) that Billy Mitchell engaged to help examine the dispute case claims on his behalf, utilizing whatever original equipment Billy could provide, whose final finding was consistent with Twin Galaxies investigation and others.”

This “Say it ain’t so, Joe” moment mirrors similar allegations of cheating in Scrabble, bridge, and competitive eating. Even in games dismissed as the pastimes of losers compulsions prompt strong desires to appear as a winner.

The philosopher describes the vain as “fools and ignorant of themselves, and that manifestly; for, not being worthy of them, they attempt honorable undertakings, and they are found out; and they adorn themselves with clothing and outward show and such things, and wish their strokes of good fortune be made public, and speak about them as if they would be honored for them.”

It seems peculiar for a man to take pride in excelling at a child’s time waster. But vanity accompanies not just the pursuit of the glorious but the pursuit of the vulgar, too. Aristotle wrote: “Now those who boast for the sake of reputation claim such qualities as win praise or congratulation, but those whose object is to gain claim qualities which are of value to one’s neighbors.”

Mitchell seems to fall in the former camp. He wanted esteem in a diversion lacking it.

Did Mitchell, who boasts many extraordinarily high scores achieved in public settings, really cheat? Did his detractors spend over a decade trying to prove he cheated because of his great-or-grating personality? Did both occur? Why does someone care enough to cheat on a video game released in 1981? Why does anyone care enough to catch a cheater on a 1981 video game? Why trust the authoritative judgment that Mitchell broke the rules of the same Twin Galaxies in whose past authoritative judgment Mitchell broke the record fair and square?

Life contains no emulator to disappear our mistakes and bring forth perfection. The closest thing to this, in real life as in real games, comes from mistakes themselves, which can, because of the disappointment and pain they bring to ourselves and others, prevent repetition. Perfectionists, at least the ones who do not strive for but instead believe they have already arrived at perfection, do not gain from the mistakes they never, ever make. Their “emulator” comes in the form of image manipulation.

This creates an illusion of perfection. But like most illusions it eventually shatters to reveal something ugly.