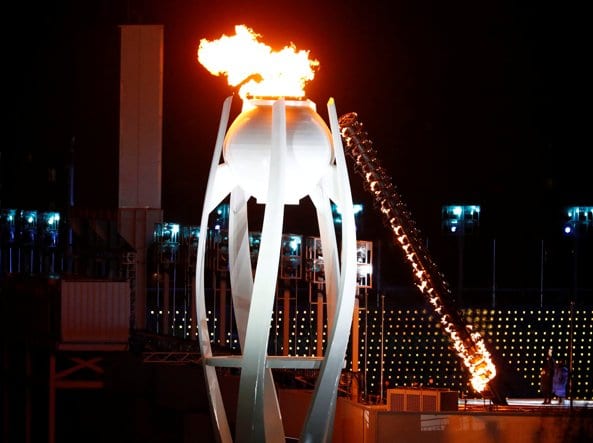 Relax, folks, we were only having a bad dream. There were no North Korean nuclear tests. Twenty-odd missiles, several capable of making the flight over the Pacific Ocean, were not fired. The regime’s top man did not compare Barack Obama to a monkey. He said nothing of those dirty Americans paying for their crimes, nor did he pronounce that Japan would sink into the sea and Seoul be consumed in a flaming inferno.

Indeed, no one really worried that nuclear war was about to break out, nor was a map published following Pyongyang’s most recent atomic test showing what would remain of Paris if such a device were dropped over the French capital.

We were dreaming! And we waken to a full display of all the proof needed to know that all is well between the North and the South on the Korean peninsula. The Korean contingent will march in the Opening Day parade under a single flag. Women’s ice hockey will be represented by a team composed of athletes from both sides. All told, several hundred Northern athletes and officials will take part in the PyeongChang Games. There will be no missiles in the waters near Guam, no bombs, no insults directed at Donald Trump.

Representatives of the two Koreas will meet and talk about the future, about cooperation, détente. They will smile for the photographers while heartily shaking hands.

The North signed an accord with the South, December 12, 1991, announcing a sunny and fraternal future. The North’s first ballistic missile test took place in May 1993.

The North’s leader, Kim Jong-il, and the South’s president, Kim Dae-jung, met in June 2000, the era of the “sunshine policy.” North and South teams paraded together at the opening of the 2000 Sydney Olympic Games, the 2004 Athens Games, and the 2006 Winter Games in Turin. That last was the year of the first North Korean nuclear test.

A year and a half later, it was the turn of South Korea’s new president, Roe Moo Young, to travel to Pyongyang. Following a few lyrical phrases, however, the weather returned to normal — chilly.

Relations between North Korea and the rest of the world, and in particular with the United States and South Korea, are variable. Periods of calm and attentiveness follow eruptions of tension and confrontation, rendering more humanly convincing the understanding that must be extended to the North Korean nuclear program — for which the North always finds willing publicists. There never is a shortage of institutions and individuals, official and private, eager to believe helping the North, including helping make it better “understood,” creates bonds of friendship and gratitude.

That is the function of the periods of calm, attentiveness — “openings,” and “closer relations.” The aim is to gain international recognitions, alleviate sanctions, gain time to get stronger militarily, split the U.S. from its allies, including South Korea.

Why should it be any different this time? Has North Korea changed? Has it renounced nuclear weapons? Has it reformed its totalitarian economy? Has it shuttered its concentration camps? Has it stopped public executions? Has it put an end to its imbecilic propaganda? Has it given up its cult of personality? Are its citizens permitted to go anywhere without requesting police authorization? Does an opposition press exist? Is public debate of anything permitted? Is there anything resembling freedom of opinion, or religion?

Of course not. The populace remains, as ever, divided in three categories: those who cannot be trusted, those of dubious reliability, and those on whom the regime can count. The third group is permitted to live in the capital. Visitors are assured by its spokesmen that all is well, transformation is on the way, and Vladimir Putin showed, rightly, that Security Council sanctions are wasted against a country that is only defending itself against those wicked Americans.

So parade as one, Korean Olympians! Defend the values represented by the Games — the world sorely needs them. As French President Emmanuel Macron stated at Lausanne last July, when he made the case before the International Olympic Committee for Paris to host of the 2024 Games, “The Olympic movement represents the values of peace and tolerance that we badly need in a divided world where tensions are on the rise.”

North Korea in 2018 represents these values the same way Nazi Germany did in 1936. Yet it is about to be welcomed to the Games, as Nazi Germany was thanked for hosting them back then. North Korea’s athletes, pom-pom girls, secret agents, spies, police watchers, officials will all enjoy the Games and will show the world they represent a country like any other.

Seoul, which is paying the full tab of the North Koreans’ visit, asked for nothing in exchange: not even that the people in the North get the news of the Games and some information on life in the South.

As the Games go on, the torture will continue, the prison camps will stay full and locked, kids will starve, hygiene and sanitation will be as disgustingly inadequate as ever, and the technicians in the underground compounds will refine their nuclear arsenal. Kim Jong-un will not stop until he is forced to. On December 12, 2017, he announced North Korea would become the greatest nuclear and military power in the world.

Pierre Rigoulot is Director of the Institut d’Histoire Sociale in Nanterre and the author of North Korea: A Rogue State (2007). He is also the author of books on France during World War II and contemporary Cuba, and a contributor to The Black Book of Communism (1997).

(This column was translated by Roger Kaplan.)