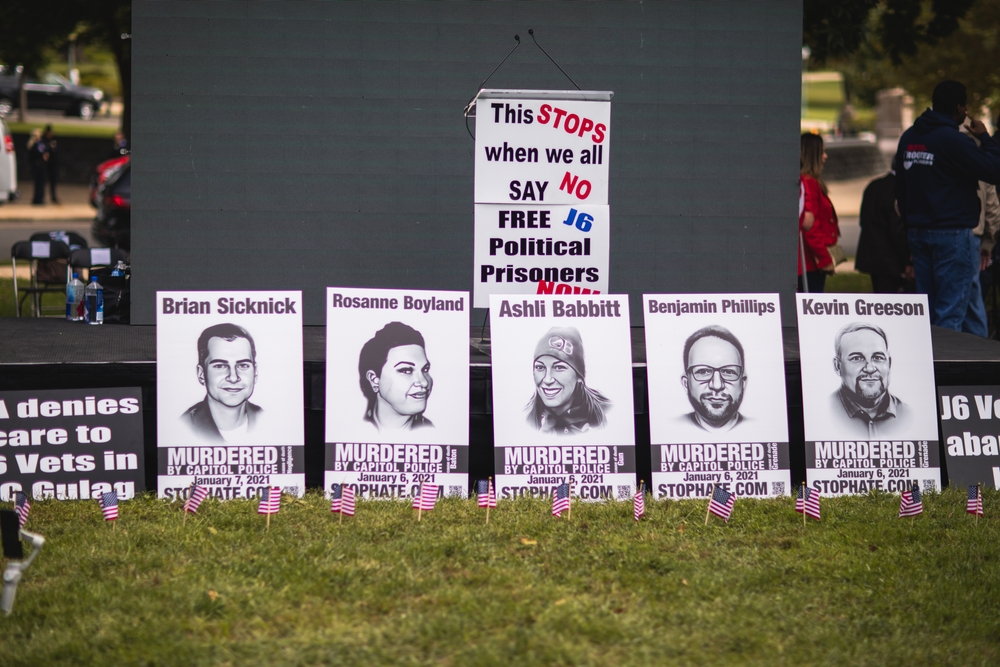 According to the Biden regime and its supporters in the legacy media, the Jan. 6, 2021, Capitol Hill riot resulted in the deaths of five police officers. And, even though one of these died of natural causes and four reportedly committed suicide days and even months after the riot, the legacy media has dutifully linked their deaths to the Capitol demonstrators. All of this is part of an effort by the regime and its supporters to portray the demonstrators as violent insurrectionists who were galvanized and directed by President Donald Trump to forcibly overturn the results of the 2020 election.

The goal, of course, is to disqualify Trump from running for reelection.

In line with this effort, the estate of Capitol Hill police officer Brian Sicknick has brought a wrongful death civil action against Trump. As alleged in the complaint, Trump “directed and encouraged a mob to attack the U.S. Capitol and attack those who opposed him.” This purportedly caused two members of the mob to assault Sicknick with some kind of pepper spray, an attack that allegedly was the proximate cause of his death.

Despite the Justice Department’s claimed inability to find evidence warranting charges against Byrd, the stark, stubborn, and troubling facts surrounding his use of deadly force remain.

Moreover, in an interview with the Washington Post, the chief medical examiner said that the autopsy found “no evidence of external or internal injuries” and “no evidence that [Sicknick] suffered an allergic reaction to chemical irritants.”

In short, Sicknick died at home of natural causes, an inconvenient fact that the U.S. Capitol Police subsequently and illogically declared “does not change the fact Officer Sicknick died in the line of duty, courageously defending Congress and the Capitol.”

Meanwhile, the regime and the media have glossed over yet another set of inconvenient facts that pertain to the gunning down of Ashli Babbitt by Capitol Police Lt. Michael Byrd.

Despite the Justice Department’s claimed inability to find evidence warranting charges against Byrd, the stark, stubborn, and troubling facts surrounding his use of deadly force remain.

Babbitt was a 14-year veteran of the U.S. Air Force who has been described as “super patriotic” and a supporter of Trump. She reportedly went to the Capitol on Jan. 6 to oppose what she and other demonstrators deemed to be a stolen election.

Little is known about her assailant’s background other than that he was once investigated for leaving his service weapon in a men’s room. Presumably, this was the same sidearm with which he shot and killed Babbitt.

On April 14, 2021, the U.S. Attorney’s Office for the District of Columbia issued a press release stating that it had conducted a criminal investigation to “determine whether federal prosecutors could prove that [Byrd] violated any federal laws, concentrating on the possible application of 18 U.S.C. Sec. 242, a federal criminal civil rights statute.” It summarized the circumstances surrounding Babbitt’s killing as follows:

The investigation determined that, on January 6, 2021, Ms. Babbitt joined a crowd of people that gathered on the U.S. Capitol grounds to protest the results of the 2020 presidential election. Inside the Capitol building, a Joint Session of Congress, convened to certify the results of the Electoral College vote, was underway. Members of the crowd outside the building, which was closed to the public during the Joint Session, eventually forced their way into the Capitol building and past U.S. Capitol Police (USCP) officers attempting to maintain order. The Joint Session was stopped, and the USCP began evacuating members of Congress.

The investigation further determined that Ms. Babbitt was among a mob of people that entered the Capitol building and gained access to a hallway outside “Speaker’s Lobby,” which leads to the Chamber of the U.S. House of Representatives. At the time, the USCP was evacuating Members from the Chamber, which the mob was trying to enter from multiple doorways.  USCP officers used furniture to barricade a set of glass doors separating the hallway and Speaker’s Lobby to try and stop the mob from entering the Speaker’s Lobby and the Chamber, and three officers positioned themselves between the doors and the mob. Members of the mob attempted to break through the doors by striking them and breaking the glass with their hands, flagpoles, helmets, and other objects. Eventually, the three USCP officers positioned outside the doors were forced to evacuate. As members of the mob continued to strike the glass doors, Ms. Babbitt attempted to climb through one of the doors where glass was broken out. An officer inside the Speaker’s Lobby fired one round from his service pistol, striking Ms. Babbitt in the left shoulder, causing her to fall back from the doorway and onto the floor. A USCP emergency response team, which had begun making its way into the hallway to try and subdue the mob, administered aid to Ms. Babbitt, who was transported to Washington Hospital Center, where she succumbed to her injuries.…

The investigation revealed no evidence to establish beyond a reasonable doubt that the officer willfully committed a violation of 18 U.S.C. § 242.  Specifically, the investigation revealed no evidence to establish that, at the time the officer fired a single shot at Ms. Babbitt, the officer did not reasonably believe that it was necessary to do so in self-defense or in defense of the Members of Congress and others evacuating the House Chamber. Acknowledging the tragic loss of life and offering condolences to Ms. Babbitt’s family, the U.S. Attorney’s Office and U.S. Department of Justice have therefore closed the investigation into this matter. [Emphasis added.]

And, with that, the Biden regime’s Justice Department declined prosecution of Babbitt’s killer.

But strangely enough, the press release makes no reference to the law governing a police officer’s use of deadly force and how it applies to Byrd’s shooting of Babbitt. Why not?

The District of Columbia Code provides that “a law enforcement officer shall not use deadly force unless” the officer “reasonably believes that deadly force is immediately necessary” to protect the officer or another “from the threat of serious bodily injury or death.” And, prior to the use of deadly force, “all other options” must have been exhausted or [did] not reasonably lend themselves to the circumstances.” [Emphasis added.]

Moreover, the Code provides that the reasonableness of the officer’s actions should be considered under the “totality of the circumstances, which shall include” whether (a) the person subjected to deadly force “possessed or appeared to possess a deadly weapon,” (b) refused to surrender the weapon, (c) the officer “engaged in de-escalation measures prior to the use of deadly force, including taking cover, waiting for back-up, trying to calm the subject of the use of force, or using non-deadly force prior to the use of deadly force.” [Emphasis added.]

An application of the foregoing legal requirements to the known facts raises significant questions concerning the reasonableness and, therefore, the legality of Byrd’s actions.

Let’s begin with the requirement that an officer may not use deadly force unless he reasonably believes that it is “immediately necessary” to protect the officer or another from the threat of serious bodily injury or death. What was the immediate need for Byrd to shoot? Was Babbitt charging at him? Was she pointing a firearm at him? Did she pose an immediate threat of death or serious bodily injury to anyone?

As reflected in the Justice Department’s press release as well as the D.C. Metropolitan Police’s heavily redacted investigative file and sobering video evidence of Babbitt’s killing, she was shot while trying to climb through a broken window in a door that was barricaded with a pile of furniture. Even if she had made it through the broken window, she would have had to clear the barricade of furniture before she could reach anyone.

Babbitt also was unarmed. She did not possess or brandish a firearm, knife, club, or any other weapon. In other words, Babbitt posed no immediate threat of death or serious bodily injury to anyone when Byrd pulled the trigger. So how could he have “reasonably believed” that deadly force was “immediately necessary” to prevent death or serious bodily injury to himself or others?

Similarly, in considering the reasonableness of Byrd’s actions, prior to using deadly force, did he engage in any “de-escalation measures” of the type provided in the D.C. Code? Did he take cover, retreat to a more defensible position away from the door, or call on the other officers who were present with him to assist in subduing Babbitt if she actually made it through the window? Did Byrd at least warn that he was going to shoot before he pulled the trigger?

To the contrary, far from taking any of the D.C. Code’s de-escalation measures, the investigative file and the video establish that Byrd positioned himself on the wall near the barricaded glass door and remained there during the protracted period while Babbitt was struggling to climb through the window. The video shows Byrd silently aiming his gun in Babbitt’s direction. After approximately 10 seconds, without warning, he fires the gun, and Babbitt falls backward from the window and onto the floor.

Given these facts and the applicable law, there is ample justification for questioning the reasonableness of Byrd’s actions and his immediate need to use deadly force. So it is that the convoluted, double-negative declaration by the Justice Department that it found “no evidence” that, at the time he pulled the trigger, Byrd “did not reasonably believe that it was necessary” to prevent death or serious bodily injury to himself or others simply defies credulity and raises questions about the seriousness and integrity of its investigation.

To that end, Babbitt’s mother has pursued a lonely and thus far fruitless mission lobbying Congress and publicly protesting the killing of her daughter.

On January 6 this year, Biden promoted the official insurrection narrative when he awarded the Presidential Citizens Medal to Capitol Hill and D.C. Metropolitan police officers for their actions during the riot. “Our democracy was attacked,” he said, adding that “nearly all of it was fueled by lies about the 2020 election.”

Meanwhile, as that ceremony unfolded, in a cruel twist, Capitol Hill Police arrested Babbitt’s mother for obstructing a roadway as she sought to commemorate her daughter’s death by laying flowers at the Capitol.

Nevertheless, although the authorities have added insult to injury, the haunting and burning question remains: Will there ever be an honest and unflinching investigation of the killing of Ashli Babbitt? The facts warrant it, and she and her bereaved mother deserve it.

George Parry is a former federal and state prosecutor. As a Unit Chief in the Philadelphia District Attorney’s Office, he supervised the Police Misconduct and Brutality Unit which investigated and prosecuted the illegal use of force by police officers. He blogs at knowledgeisgood.net.