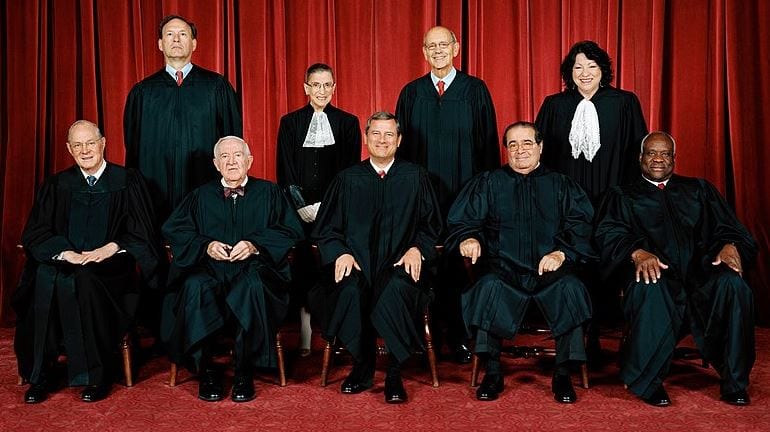 More Politics
Sign up to receive our latest updates!
Register
Hot Off
The Press
Blog
Herschel Walker Accused of Paying to Abort His Child
by Ellie Gardey
The Talkies
Blondes Have Less Fun: The Latest Tragedizing of Marilyn Monroe
by Lou Aguilar
Asia
South Korea’s Hidden Sex Trafficking Crisis
by Duggan Flanakin
Loose Canons
From Superpower to Paper Tiger: Part Two
by Jed Babbin
Hither and Yon
The Ghouls Descend On Florida Only to Be Disappointed
by Scott McKay

Today, on June 27th, Justice Anthony Kennedy wrote to the President to formally announce that, at 81 years old, he is retiring from the Supreme Court of the United States, effective July 31st. Kennedy was originally nominated in 1987 by President Ronald Reagan, and confirmed later the next year.

Kennedy has earned a reputation as the Court’s swing vote. By way of illustration, he authored the majority opinion in both Obergefell, which declared state bans on same sex marriage unconstitutional, and Masterpiece Cakeshop, which found for a baker refusing to create a cake for a gay wedding. Martin-Quinn scores are a common way to measure the liberal or conservative lean of judges. Scores above zero denote conservatives, below zero denote liberals. Over the course of the 2016 term, Kennedy received a score in the neighborhood of -0.3. That year, the Court as a whole received a -0.195 rating. Every other liberal Justice received a score of at least -1, and Kennedy was closer to fellow Republican appointee Justice Roberts. But for the entire Roberts court, he was the median justice: four Justices more conservative, and four more liberal.

President Trump confirmed his intention to begin the nomination process immediately today while speaking to reporters. You can read his list of twenty-five potential nominees from the Scalia process here.