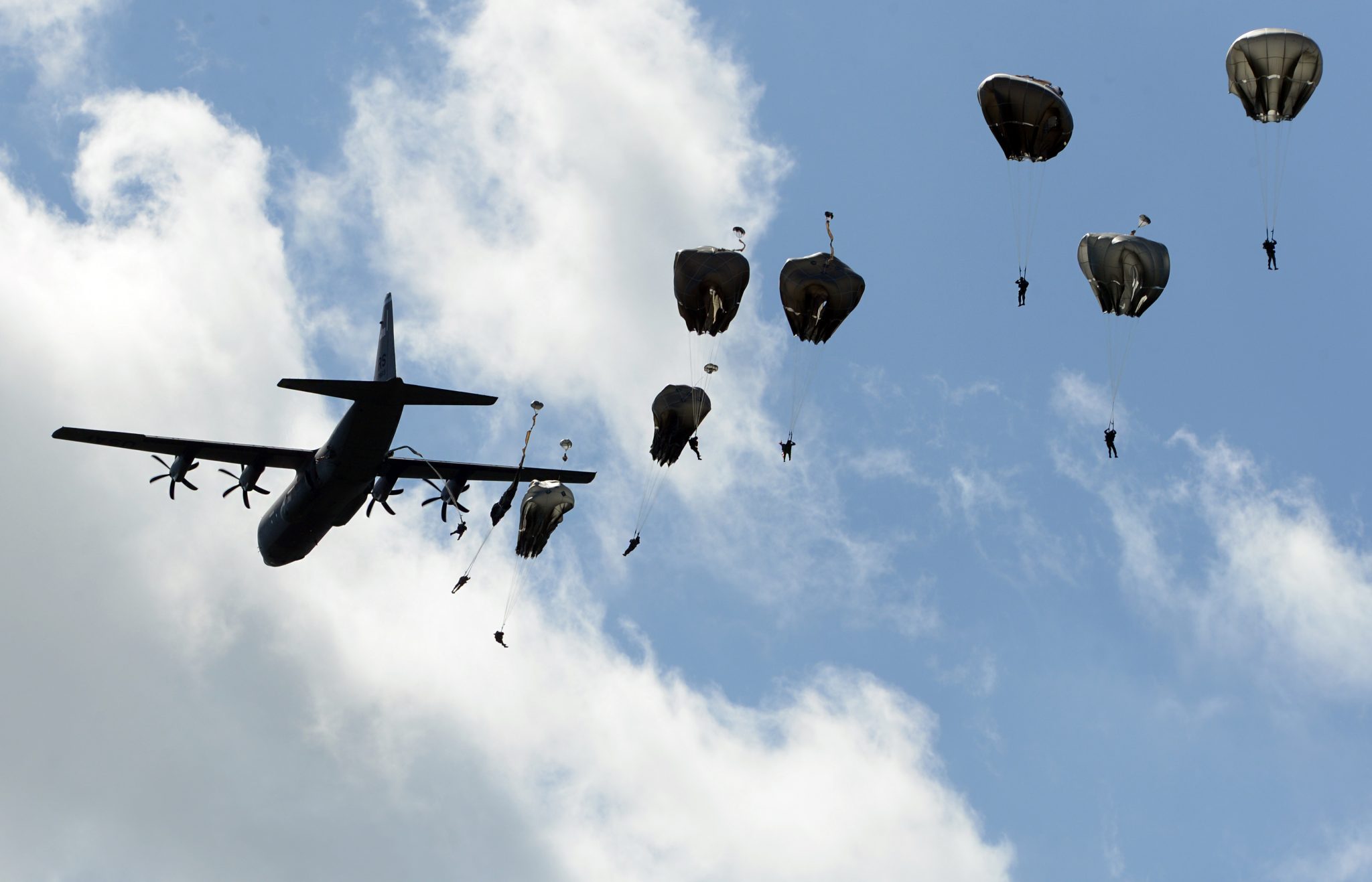 Whatever It Took: An American Paratrooper’s Extraordinary Memoir of Escape, Survival, and Heroism in the Last Days of World War II
By Henry Langrehr and Jim DeFelice
(William Morrow, 273 pages, $27.99)

Henry Langrehr, aged 95, lives in retirement in Clinton, Iowa, where he was born and has remained, save for the dramatic, demanding, and sometimes terrifying two years that this book chronicles. In his postwar working life, Langrehr built a successful construction business where he most enjoyed building libraries, schools, and other things that improve his community. He and his wife, Arlene, raised a family, supported their church, and generally lived the American dream. Great Americans by any measure. 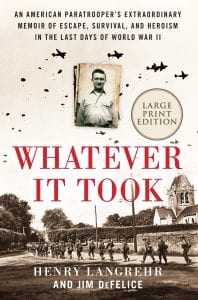 But what detains us here is not the schools or the other worthy projects of Langrehr’s company, but the two years and change Langrehr served as a trooper in the 82nd Airborne. After long and arduous training, young Henry jumped into Europe and combat hell on D-Day. Paratrooper training was tough, but Langrehr always enjoyed jumping out of airplanes. He found this a lot less fun on D-Day when people were shooting at him. To make matters more complicated, Langrehr crashed through the glass roof of a greenhouse when landing in the town of Sainte-Mère-Église. But he was luckier than Trooper John Steele, who wound up hanging from a church steeple in the center of town, surviving only by playing dead for hours. Langrehr knew Steele, but could do nothing to help him that day.

Private First Class Langrehr jumped into Europe at 150 pounds. When ex-prisoner Langrehr was reunited with his countrymen he weighed 90 pounds.

After three weeks of combat, in which on several instances he missed death by inches, Langrehr entered on a new kind of hell when a blast from the gun of a Nazi Tiger tank left him unconscious with a back full of shrapnel. He awoke as a guest of the Wehrmacht. Fortunately he received some minimal medical care as a prisoner before he was sent to a work camp, where he endured long hours of hard labor mining coal under the watchful eyes of cruel guards who didn’t hesitate to beat prisoners, including Langrehr, with rifle butts for the merest infractions. He and his fellow prisoners were expected to do this hard labor seven days a week on a diet of beet soup and ersatz bread (ersatz because it was made with flour and sawdust).

Langrehr could see where this prison life, if you could call it life, was headed. The Nazis were deliberately working prisoners to death in enterprises to support their war effort. When prisoners fell, they were simply buried and replaced by other prisoners. Prisoners were told if they attempted to escape, or escaped and were recaptured, they would be killed. Langrehr had no reason not to believe this. But he could also see that continuing the agonizing labor forced on him on a slow starvation diet would also lead to a miserable death. So he decided to try to escape, which he managed to do during an inattentive moment on the part of the guards when he and others prisoners were being marched back to camp after 12 hours of mining. There followed weeks on the lam in hostile country. Langrehr doesn’t know where his prison camp was, but somewhere in Germany. Food, water, and shelter were always a challenge, and the threat of capture followed by execution was always with him. He finally found himself in the way of American troops fighting their way eastward through Germany. Private First Class Langrehr jumped into Europe at 150 pounds. When ex-prisoner Langrehr was reunited with his countrymen, he weighed 90 pounds.

This story, just one of the millions of stories of America’s unlikely warriors during the most horrific war in history, is told in first person by Langrehr’s co-author, Jim DeFelice (American Sniper, Every Man a Hero, Omar Bradley, Rangers at Dieppe, and others.) DeFelice’s writing style flows easily and the first-person approach gives an immediacy and emotional impact difficult to achieve in third-person histories. Readers can feel almost as if they’re there with Henry as his remarkable story unfolds, but, of course, without all the noise and the danger.

The best biographers respect the complexity of their subjects. DeFelice does this with Langrehr, as he plumbs the effect his experiences had on a young American, far from home in places he’d never heard of where strangers were trying to kill him, and who became a prisoner of war on the day he would have graduated from high school. Langrehr was hardly alone in being obliged to kill people, sometimes up close and personal, whom he didn’t even know, and to see some of the worst things human beings can do to each other. Combat veterans react in different ways to the incredible strains put on them and the things they’re obliged to see and do to survive.

In Langrehr’s case, his war experiences, which he declined to talk about to anyone for a half century, brought him pride in what he and his fellow warriors achieved, sorrow and horror at the things he saw that no one should have to see, even shame at some of the things he had to do to survive. One act that continues to trouble him is the woman, a civilian, who started to yell when she spotted a fugitive Langrehr drinking from a well near her house. The choice was to let her shouts bring the Germans and almost certainly death or to take the pistol he had relieved a German soldier of and shoot her. He shot her. Sometimes knowing that it was kill or be killed is not enough for the conscience. He still deals with it. Langrehr and his comrades did, as the title of the book instructs us, whatever it took to survive.

DeFelice’s fine rendering of Langrehr’s story, one of millions of stories of young Americans who put everything on the line to save the American dream for those who followed, reminds us that there’s not enough available gratitude to sufficiently thank those who gave so much when it was needed. And it reminds us that no matter how skillfully stories of warriors at work are rendered, only those who fought will ever truly know what being in combat is like. A caution: Langrehr and DeFelice do not linger over the grisly aspects of combat and what went on in the camps. But some details of the story are pretty sobering. As they say on television — viewer discretion is advised.

Salutes and humble gratitude are owed to Henry Langrehr and to the diminishing number of warriors like him who remain. These should be rendered while there’s still time to do so.