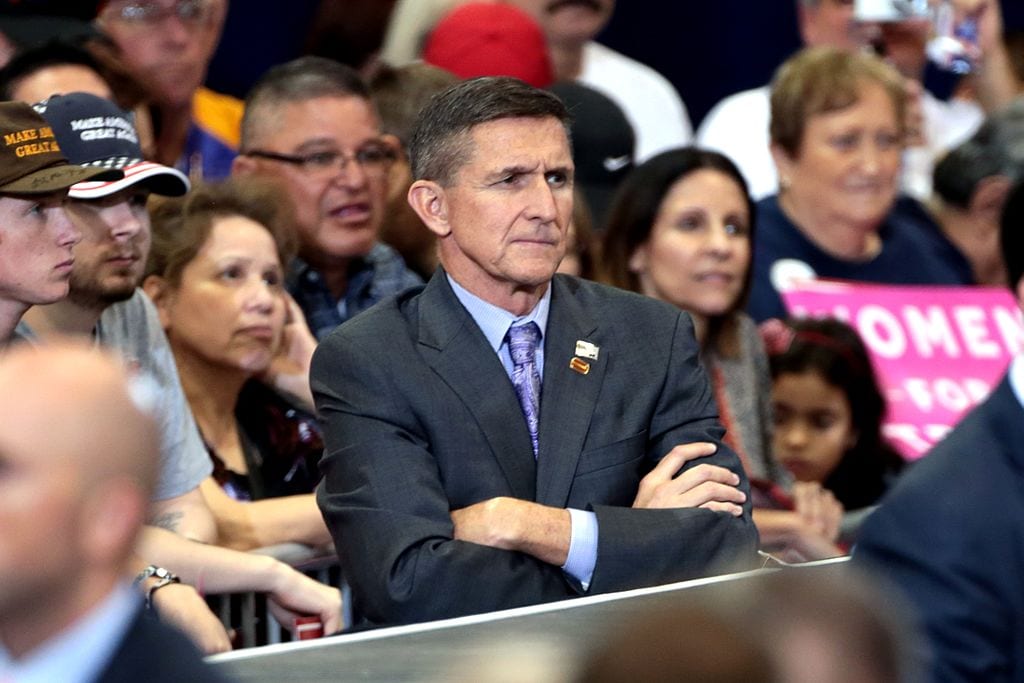 Trending
The Prisoner of the Vatican
by George Neumayr
How Not to Cover a Second Amendment Rally
by Nic Rowan
The Dems Still Don’t Know Why Trump Won in 2016
by David Catron
Sign Up to receive Our Latest Updates!
Register
Hot Off
The Press
The Current Crisis
Codes of Conduct From the Swamp
by R. Emmett Tyrrell, Jr.
California Watch
Occupied California
by Steven Greenhut

Behind the front-page indictments issued by Special Counsel Robert Mueller, there have been quiet movements in the courts on another front.

These developments have led supporters of former National Security Adviser Michael Flynn to call on President Donald Trump to pardon Flynn, or on Flynn to withdraw his guilty plea for making “materially false statements and omissions” to the FBI in 2017.

• Rudolph Contreras, the federal judge who accepted Flynn’s guilty plea on Dec. 1, took himself off or was taken off the case for undisclosed reasons.

• His replacement is Emmet Sullivan, a crusading federal jurist who in 2009 famously lambasted federal prosecutors who had won a conviction against U.S. Sen. Ted Stevens, R-Alaska, for repeatedly withholding exculpatory evidence from Stevens’ legal team.

(Later, newly installed Attorney General Eric Holder asked that all charges against Stevens, who was convicted in October 2008, be dismissed. Stevens’ conviction was overturned, but only after the scandal-soiled senator narrowly lost his bid for re-election.)

Ever since then, Sullivan has made it a practice to order prosecutors to share information favorable to a defendant with the defense team. As Flynn awaits his sentencing, Sullivan issued one such order in December. He did so again on Feb. 16, with the important instruction — that if prosecutors aren’t sure if favorable evidence is material, they should hand it over to the judge so that he can decide.

Another straw in the haystack: Relying on anonymous sources, the Washington Examiner’s Byron York recently reported that former FBI Director James Comey told Capitol Hill lawmakers in March that FBI agents who interviewed Flynn did not believe he had lied to them about his December discussions with then-Russian Ambassador Sergey Kislyak. If withheld, that information might have kept Flynn from cutting a deal.

According to York, then-Acting Attorney General Sally Yates “reportedly believed Flynn might have violated the Logan Act,” a 218-year-old law that is supposed to keep private citizens from conducting diplomacy on their own. Yates sent two FBI agents to talk to Flynn a second time.

Two days later, Yates warned the White House that Flynn could be in danger of blackmail because he had lied to Vice President Mike Pence about the content of his December conversations with Kislyak, which the intelligence community had tapped.

Trump also fired Yates for refusing to enforce his first travel ban. And he fired Comey in May.

Sullivan’s instructions and past history have led sympathizers to wonder if federal prosecutors withheld important evidence from Flynn’s legal team.

“Of course, the point is moot now because Flynn has admitted his guilt,” former federal prosecutor Andrew McCarthy wrote in National Review in December. “Still, I wonder whether Mueller’s team informed Flynn and his counsel, prior to Flynn’s guilty plea to lying to the FBI, that the interviewing agents believed he had not lied to the FBI.”

Michael Ledeen, a Flynn friend who has written multiple books on national security, said, “I want the whole case thrown out. I do not believe for a minute that he lied to the FBI.”

Tom Fitton of the conservative gadfly group Judicial Watch had the same reaction. Mueller’s investigation, Fitton charged, is “out of control” — and as far as Fitton is concerned, Flynn would not lie.

Ledeen thinks Flynn cut the deal with Mueller to protect his family, perhaps to shield his son from prosecution.

Here’s the problem, countered Max Bergmann senior fellow at the left-leaning Center for American Progress. In the plea deal, Flynn admitted he’s a liar. “I think if you plead guilty to lying,” that’s a hard admission to walk back.

Bergmann added that in March, Flynn offered to talk to House and Senate investigators if they granted him immunity from prosecution. “That’s not the action of someone who feels like they’re innocent,” he said.

Then there’s the matter of Flynn’s failure to register as a foreign agent when he represented repressive Turkey during the 2016 campaign. Bergmann said he believes that Mueller went easy on Flynn by not pressing more serious charges against him. If Flynn takes back his guilty plea, Mueller would be free to throw a heavier book at Flynn.

Will Mueller produce a case that the Trump campaign colluded with Russia, as some Democrats contend? Or will a federal judge produce a case for prosecutorial overreach, as some Republicans suggest? Stay tuned.

Dov Is All You Need
Looking Back on 2019 (Part Two of Two)
by Dov Fischer
The Right Prescription
Impeachment by Focus Group
by David Catron
Dov Is All You Need
The Great Gift of the Mueller Russian-Collusion Probe
by Dov Fischer
Buy the Book
Witch Hunt: Gregg Jarrett Scores Again
by Jeffrey Lord
Special Report
CrowdStrike and the Impeachment Frenzy
by George Parry
The Current Crisis
Impeachment Creates an Opening for Chappaqua
by R. Emmett Tyrrell, Jr.
o
Sign Up to receive Our Latest Updates! Register