Another Perspective,Politics,Top Story Art,Judicial Activism,Music,U.S. Supreme Court Judges Could Solve All Our Problems - The American Spectator | USA News and Politics
Menu
Another Perspective
Judges Could Solve All Our Problems
We must let them. A recent court case points the way.
by Marc Berman
The Supreme Court of New Jersey. Image: njcourts.gov 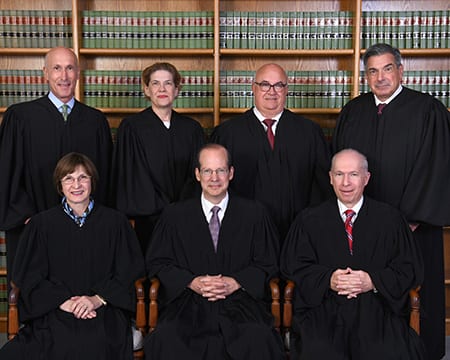 Concert tickets are expensive. It’s risky to rely on music reviews to choose which performances to attend. Critics are fallible. They don’t always recognize true art.

In contrast, the United States Supreme Court has long regarded itself as infallible, because of its self-assumed role as the final, authoritative interpreter of our Constitution. State supreme court judges claim similar power regarding state law.

I have often prayed that such judges might give us humans the benefit of their omniscience in other fields besides law. Like, say, in music criticism.

My prayers have finally been answered. The New Jersey Supreme Court recently decreed that all music is art.

Now, the New Jersey court’s foray into music analysis, while welcome, seems untraditional. How did judges undertake to decide which music has aesthetic value? Aren’t they supposed to stick to interpreting legal texts?

Fortunately, judges, by and large, no longer view themselves as interpreters of the law. Rather, they see themselves as volunteer legislators.

For example, many of our infallible federal Supreme Court justices believe that their Ivy League education establishes them as sages who needn’t be bound by parochial concerns. Like the text of the Constitution.

As renaissance people, it’s not surprising that these high court members are experts not only in law, but also in astronomy. Few deplorables remember that “penumbra” means “the shadow cast by the earth or moon over an area experiencing a partial eclipse.” But Supreme Court justices remember. Indeed, in 1965, some of them discovered that the Constitution itself casts “penumbras.” Constitutional “penumbras” are doctrines that the justices understand are implicit in the Constitution, yet aren’t found in its text. Apparently, the Founders were smart enough to realize that overeducated judges 200 years later would know what the document really meant.

Since the 1960s, woke Supreme Court members have used these penumbras, and other free association techniques, to improve our benighted lives. Fittingly, these justices implement their personal preferences for social policy, rather than minding what the Constitution actually states. As a recent piece in the Harvard Law Review declared, it’s “past time that … the American people accept that … the Constitution means what judges say it means and the text just doesn’t matter.”

Other judges follow the lead of the Fab Nine. These lower magistrates also decide cases as their internal Ouija board dictates. The New Jersey justices who decreed all music to be art merely ratcheted judicial lawmaking closer to its logical climax.

The Garden State litigation was unremarkable. A woman attending a country music concert at Monmouth University fell while climbing an allegedly hazardous staircase. She sued the school. The university, however, is an educational nonprofit. Pursuant to New Jersey law, someone who benefits from the “works” of an educational nonprofit can’t sue the institution for negligence. The university argued that the alleged victim received an educational benefit by attending the concert. Accordingly, the school applied to dismiss her lawsuit.

The Jersey justices didn’t need to adjudicate which music is art to decide the case. Indeed, as they acknowledged, hoary legal tradition dictates that judges, however fabulous their legislative capabilities, “should not be in the business of deciding what music constitutes … art.”

So the court could have ruled based on, say, whether the university’s intent was to provide an educational benefit to the public, regardless of the quality of the music offered at the concert.

Instead, the justices proclaimed all music throughout the land to be art. They held that, therefore, the concert benefitted the injured woman educationally. Case dismissed.

Here’s the puzzler, though: The judges claimed that, because they declared all music to be art, they really hadn’t acted as music reviewers.

Huh? Call me a nitpicker, but isn’t ruling that all music is art tantamount to deciding which music is art? The justices simply established an unlimited criterion. More fundamentally, why would judges even discuss aesthetics, unnecessarily, in a mundane personal injury case?

My view is that the justices, by gratuitously establishing an eternal musical standard, yet denying that they had acted as music critics, slyly meant to suggest, sotto voce, that judges should not lord over us only when they decide lawsuits.

Rather, these jurists wanted us to envision the utopia that would flower if only the courts controlled society totally. Music criticism is just a convenient example that they used to exhibit their unmatched ability to make decisions for other people.

America must take the Garden State justices’ hint. No court should henceforth limit itself to merely legislating from the bench by inventing legal doctrines from thin air.

What, with the 3,300,000 Democratic presidential candidates (aka “the 1 percent”) reminding us that climate change and gender-segregated restrooms are about to erase life on earth, we little people have enough to worry about. Asking us to decide anything further ourselves would be asking too much.

Marc Berman writes on politics, law, culture, and current events. He can be reached at marcberman222@gmail.com.