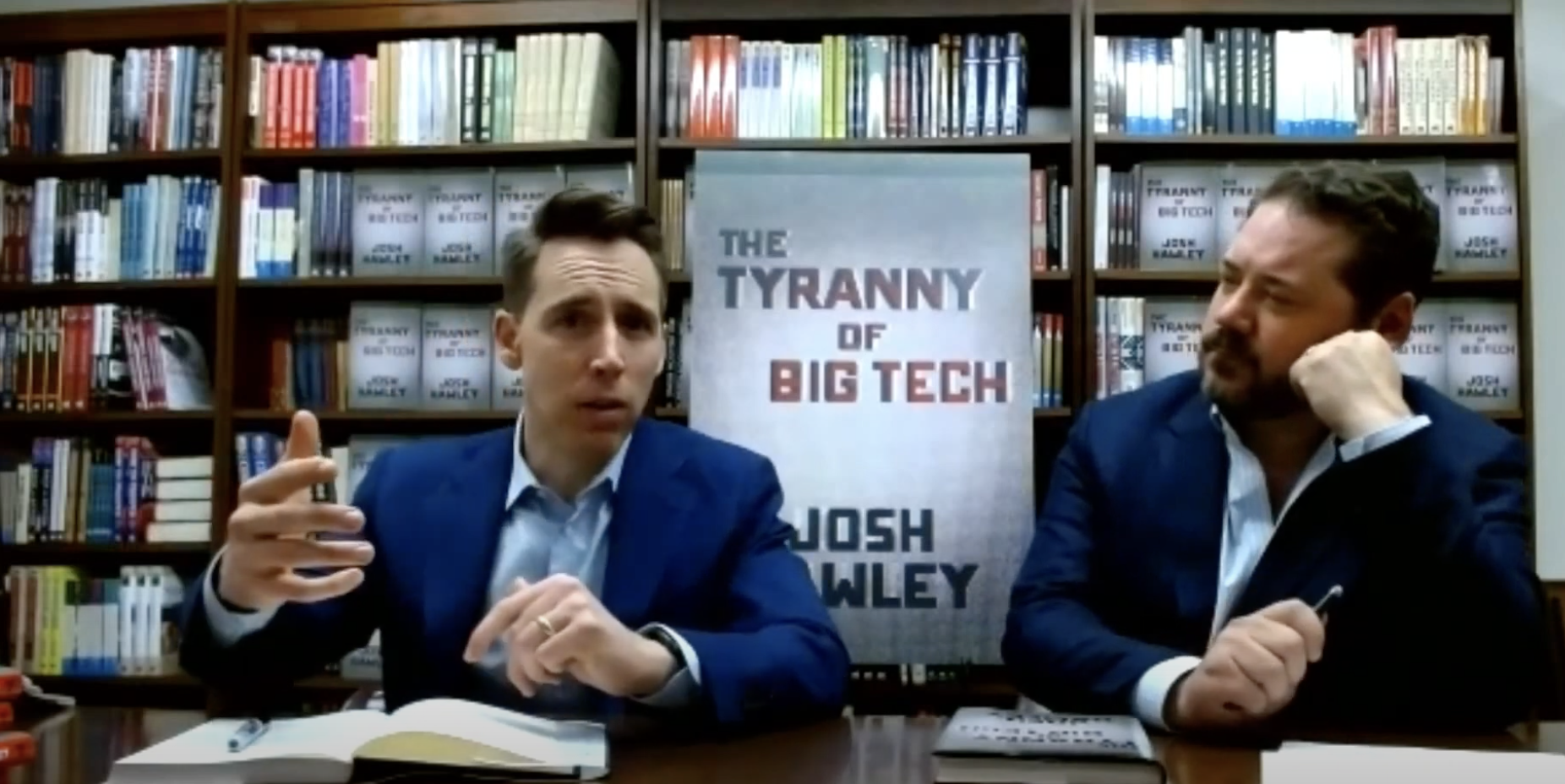 Sen. Josh Hawley (R-Mo.) told Fox News back in January that he has no plans to run for president in 2024 and countered that “There’s a lot of work to do” in the Senate. Much of that “work” will entail the freshman senator pushing to enact new legislation to rein in Big Tech, which Hawley characterizes as “today’s robber barons” in his new book, The Tyranny of Big Tech. This is the same book that Simon & Schuster, its original publisher, dropped after the events at the Capitol on Jan. 6. Hawley unequivocally denounced what occurred at the time, but his objection to the certification of the electoral votes in Pennsylvania was simply too much for the woke publishing company. So the book was canceled and later picked up by Regnery Publishing.

In the book, Hawley correctly argues that the Big Tech oligarchs are abusing their power in much the same way that John D. Rockefeller, Cornelius Vanderbilt, and John Pierpont Morgan used their massive wealth and influence at the beginning of the 20th century to violate antitrust laws, illegally lobby and buy politicians to curry favors and receive immunity from the federal government, stifle competition, and eliminate any obstacles that threatened their grasp on power. Above all else, the robber barons wanted to fundamentally transform America however they saw fit.

Hawley refers to this paradigm as “corporate liberalism” — the process by which the entire American economy was run by the financiers and industrialists. He argues that this not only discouraged competition and independent producers but working-class families were “swept aside as the dominant force in American life and replaced by the enlightened, sophisticated corporate aristocracy,” under whom “America would become a corporate republic.” In other words, the proletariats were forced to shut up and obey while the barons called all the shots, because they supposedly knew what was best for everyone else.

Hawley points out that history is repeating itself, as Mark Zuckerberg, Jack Dorsey, Jeff Bezos, and other Big Tech titans are doing their best robber baron impression in 2021, using their platforms as distractions to keep us obedient and in full compliance with their commandments. “It was never about social media or search or video … it was about gaining a foothold in all the highways and byways of social communication … a foothold that would allow Big Tech to act a gatekeeper, as toll-master, for everything that went across,” Hawley writes. “Big Tech seeks to create a global system of automatic rent extraction from the real economy.”

Hawley argues that, in a sense, the Big Tech oligarchs are using us as pawns so they can achieve their real goal of mainstreaming their radical leftist agenda: pro-LGBTQ, pro-abortion, pro-Black Lives Matter, pro-Palestine, anti-conservative, anti-Christian, anti-Semitic, anti-Israel, anti-police, anti-life. They impose this progressive viewpoint on all their users. In Zuckerberg and Dorsey’s envisioned utopia, their distorted and divisive views should reign supreme, while all dissenters must be banished, deplatformed, and canceled. Question the legitimacy of the last presidential election, the effectiveness of wearing masks, or the origin of the coronavirus, and you might soon find yourself in the Facebook gulag or on the Twitter blacklist.

Facebook, Twitter, and Google may originally have represented examples of the success of capitalism and the free market, but things have changed as their power has grown. Now these tech companies harvest personal data without people’s knowledge or consent, illegally surveil Americans, censor and flag content that runs counter to their progressive agenda, crush their competition, cozy up to communist China, suppress factual but negative stories about Democrat presidential candidates, and ban former President Trump from being able to communicate effectively with the public under arbitrary and absurd standards.

So how does Hawley plan to defend our liberties from Big Tech tyranny?

First, he’s pushing for Congress to pass new laws that would strengthen antitrust enforcement. He calls for the Department of Justice (DOJ) to have the sole authority to enforce antitrust laws against Big Tech monopolies, rather than the DOJ dividing its oversight with the Federal Trade Commission (FTC), which has a friendly relationship with Big Tech, and is not held politically accountable in the same way that the DOJ is.

Second, Hawley wants to crack down on mergers and force Big Tech companies to choose either to act as consumer-facing digital platforms or become producers of goods and services.

He also advocates for repealing Section 230 for any tech company that “engages in manipulative, behavioral advertising” and calls for the Big Tech companies to return control over personal data to individual users.

Given the immense power of Big Tech, Hawley faces an uphill battle with any of these proposals. But whether he does decide to run for president or remain in the Senate, Big Tech can be certain that Hawley means business. As for the rest of us suckers beholden to Lord Zuckerberg, maybe it’s time to put down the smart phones and enjoy the warm weather without a mask on for a change.